Where the Artisphere went wrong. 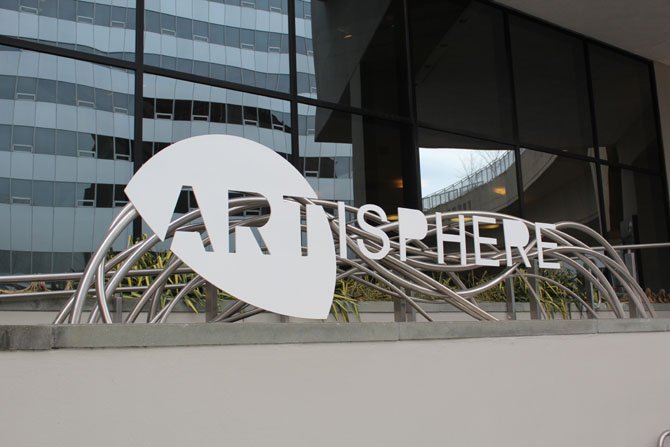 Artisphere is located at 1101 Wilson Boulevard in Rosslyn, and is accessible via foot, car or metro. Jennifer Benitz

The County Manager Barbara Donnellan has finally made the recommendation to put the Artisphere down after five years of its limping through budget seasons. Tasked with finding a way of saving the financially hemorrhaging arts center, Donnellan warned the County Board in December that Artisphere’s future was in jeopardy, and followed through with listing the Artisphere as one of the optional cuts in the proposed Fiscal Year 2016 County Manager Budget, released Feb. 19.

“The idea of the Artisphere closing is part of the options,” said Diana Sun, Arlington County’s director of communications. “The board has asked for $4.1 million in options, and those optional cuts are a part of what we’re looking at right now.”

The Artisphere’s annual operating budget is $3.4 million. While the center brings in $1.2 million in revenue through event rentals, ticket sales, and support from the local Rosslyn Business Improvement District, that leaves $2.2 million each year to be paid directly in tax support. Most of that funding was largely out of the budget for the Arlington Arts and Cultural Affairs, and according to County Manager’s Budget, some of those funds would be restored to Arlington Arts and Cultural Affairs to be reinvested more strategically.

The Artisphere’s funding runs through June 2015, the last day of the planned FY 2015 funding. At that point, the County Board will be required to vote on whether or not to continue funding the Artisphere, which presents a few challenges.

According to Karen Vasquez, the former director of Cultural Affairs, the building is plagued by some substantial operating costs, including $1.2 million “just to open the doors and turn on the lights”, meaning all of the costs just to operate an empty building, which might be what the county winds up paying. To separate from their lease with Monday Properties six years before it is set to expire, the county will be required to file a 12-month notification, which would take place in June. With discussions between the County Board and Monday Properties impending, a spokesperson for the real estate investment firm declined to comment. If no deal can be reached, the county may be paying to heat and light an empty building.

Vasquez warned that, although the Artisphere is in the site “rent free,” the county would still be responsible for these basic costs at the site.

“No one will be in that space,” said Vasquez, “but we’d still have to keep it heated.”

As part of her recommendation to close the Artisphere, Donnellan suggested that the county could sub-lease the 60,000-square-foot building or could attempt to return it to Monday Properties. The site plan conditions stipulate that the property must be used for arts or cultural use, which limits the sub-leasing options. Given the difficulties Vasquez said Monday Properties was having in finding an occupant before Artisphere moved into the location, returning the property before the mandated 12 months could be problematic as well.

In many ways, the Artisphere was doomed before it ever opened. The Artisphere cost $7 million in initial building costs and had to request an $800,000 addition to their annual operating budget of $3 million. That investment was hoped to be recuperated by an estimated attendance of anywhere between 250,000 to 300,000 attendees. In fiscal year 2012, the Artisphere had a total of 55,607 attendees, or 18.5 percent of the anticipated visitation. In her presentation to the County Board in December, Donnellan cited national and regional shifts, particularly Base Realignment and Closure, or BRAC, as the primary source of the faulty projections. Vasquez agreed that the national economic downturn and BRAC both took heavy chunks out of the expected attendance at the Artisphere.

“When the idea was first proposed, there were a number of properties on the books, slated to be developed, that would have been completed by the time the Artisphere would have opened,” said Vasquez. “But those [projects] didn’t open. The basic economy was people pulling back and people having less entertainment dollars, and the numbers of people that were expected weren’t in Rosslyn.”

But Vasquez also noted that a larger part of this fault rests squarely on the absurdly high numbers the project was sold with. Vasquez noted that, for comparison purposes, that Sidney Harman Hall in Washington D.C. only reaches an annual attendance of around 75,000 visitors annually. The Arthur M. Sackler Gallery and the National Museum of African Art in D.C. each received less than 250,000 visitors in 2014. At 300,000 visitors, the Artisphere would have had to be on par with the Freer Gallery of Art.

“Before the bust, I think people were overly optimistic,” said County Board Chair Mary Hynes. “It matters a lot when you go into something like this that you have a realistic business plan. People who open a real business don’t expect to break even by year five or six.”

Other, smaller issues continued to make the Artisphere’s development as a gallery problematic. Much of the interior of the building is open space, which makes hosting simultaneous events nearly impossible because the spaces are difficult to separate. Open spaces are also expensive to keep heated, which adds to the gallery’s sizable maintenance costs. Hynes also noted that the building’s electrical infrastructure makes it impossible to light and heat just a part of the building for an event; the whole building is lit and heated or none of it is.

“In hindsight, most agree that we probably opened a little bit too early,” said Vasquez. “We had not hired an executive director and the staff was fairly small. There were basic operational infrastructure that were not in place. Hindsight would tell us there were things that should have been done prior to that opening.”

The center’s planned director, Jon Palmer Claridge, left before the facility’s opening when he said it became clear that the Artisphere would not shape up into what had been planned.

While County Board members John Vihstadt, J. Walter Tejada, and Jay Fisette expressed support for Donnellan’s proposal to close the Artisphere, Hynes emphasized that a final decision hasn’t been made and the board is continuing to explore various options. Vasquez says she understands the necessity of the decision, but says the public is quick to forget the good work that happened there.

“It’s been easily thrown about in a political discussion and by members of the public,” said Vasquez. “It’s been looked down upon as a vanity project and equally derisive terms, and that’s not telling the whole story. There are a lot of reasons it’s not as successful as it could have been, but it was unique, and it’s a shame that it is closing.”