McLean — Working in a hospital, Dr. David Jones was able to see firsthand the delays and inconveniences of many current medical practices. So he decided to go, in his words, "back to the way medicine was 30, 40 years ago," and started a concierge practice in McLean a year ago. On Thursday, June 7, Jones celebrated one year in business with the Greater McLean Chamber of Commerce at his Beverly Road Office. 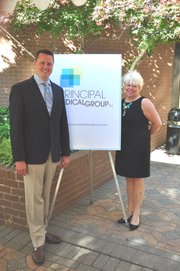 Dr. David Jones of the Principal Medical Group and Marcia Twomey, president of the Greater McLean Chamber of Commerce, at the one-year anniversary reception of Jones’s McLean office Thursday, June 7.

"Concierge medicine allows better access to a doctor, I often can see my patients the same day, and they have my cell phone and email, which can even eliminate a lot of the need to come into the office," he said. "I had a patient that was floored by the idea, he said he didn’t know this was the way medicine operated."

Jones says his practice allows him to create a strong referral network for his patients, connecting them to specialists as needed with expedited appointment times.

"I had a patient who was suffering from testicular pain and was told it would be a three and a half week wait for an appointment with his urologist," he said. "I was able to get in touch with a satellite office and get him in much sooner."

Appointments with Jones are longer than the five to 10 minutes with other doctors, and the increased time allows him to get to know patients more and do more research into potential or actual problems, sometimes without having to refer them out to specialists.

Jones acknowledges that concierge medicine isn’t for everybody, but that his patients so far seem to be pleased. And with a small staff of two other people, Jones said he can even be found answering the phones during the day, which he says shocks his patients.

"I think people are happy to know they can get a hold of me whenever they need to," he said. "I like to get to know not only the patient, but their spouse, their children and even see them at Giant. It’s rewarding to be part of a community like this."