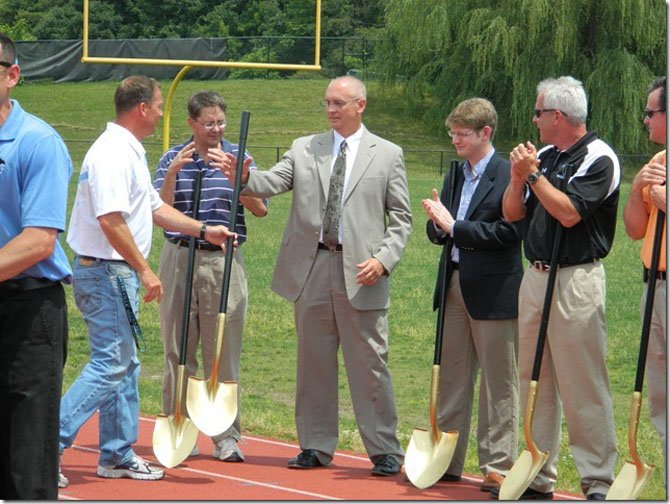 Coach Chris Haddock hands a shovel to outgoing CVHS Principal Mike Campbell, who will be retiring from FCPS this month. Photo Courtesy of Centreville High School

Hosted by Director of Student Activities Jimmy Sanabria and CVHS Head Football Coach Chris Haddock, and attended by CVHS students, six key individuals, all instrumental in the successful fundraising to procure the two fields at a cost of $1.2 million, were handed golden shovels and invited to dig up part of the grass field that will soon be replaced by state-of-the-art turf material.

Although unable to attend, Herrity issued this statement regarding the construction: “This is a great day for Centreville High School and its community partner, the Southwest Youth Association. A new turf field will be an asset to the students that go there, as well as others in the sporting community. Supervisor Frey and I were happy to be able to help find the funds to help make this great day a reality. I look forward to coming back in a few months to see the new field in action.

“It will encourage kids to get outside and get involved in sports whether it be through the school or with a local club, helping to promote both a healthy lifestyle and also the values of teamwork, courage and discipline that go hand in hand with team sports. As a former youth sports coach of rugby, ice hockey, and swimming I fully understand the importance of youth sports and supported this initiative right from the start.”

The groundbreaking for the two new turf fields is the culmination of a successful fundraising campaign throughout the 2011-2012 school year, which has included two major fundraising initiatives by the CVHS Student Activities Department and efforts of many volunteers from the high- school community.

The fields will be used by the Centreville Wildcats sports programs, but are also expected to be a help to the Southwest Youth Association (SYA) and other groups throughout the Clifton/Centreville area. The dearth of artificial fields, usable no matter how many rain events occur in short order, has caused numerous instances of athletic directors, soccer coordinators, and myriad other personnel scrambling schedules and working to find available time on non-grass surfaces.

Construction is expected to commence immediately, and the grand-opening ceremony is slated for Friday Aug. 31, at 6:15 p.m. as the Wildcats begin the Fall 2012 football season defending their AAA D6 Northern Region title.