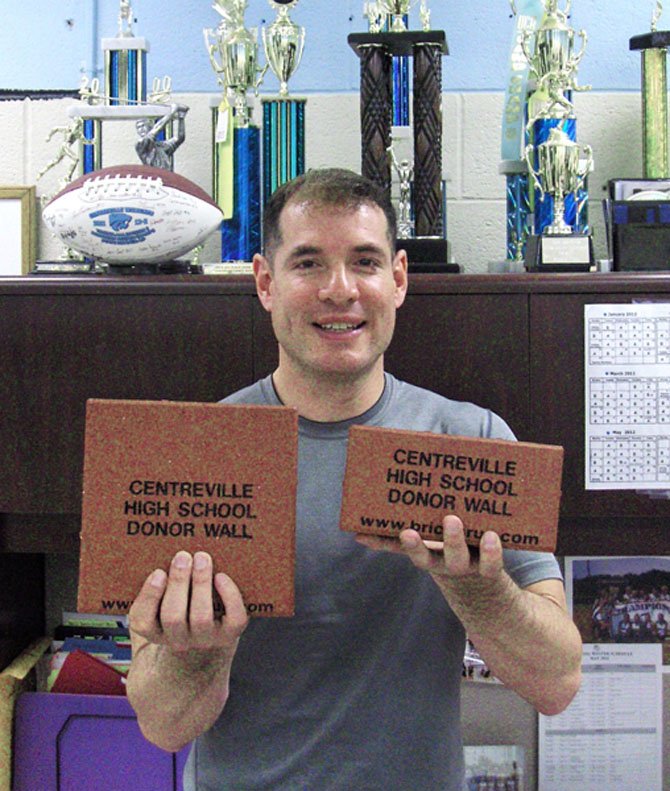 “Since last August, we’ve been selling name bricks and will construct a brick wall honoring the donors at the entrance to the football stadium,” said Wildcat Athletic Director Jimmy Sanabria. “The wall will be put up before the first football game in the fall, when the Wildcats will defend their regional title.”

Go to www.bricksrus.com... or www.wearecville.com for more information and to place an order. Souvenir bricks may also be purchased.

The bricks are personalized and engraved and come in two sizes for either $100 or $250. People may buy them at www.bricksrus.com/order/cvhsturf and also see a preview of their actual brick there. It’s a project important not only to the school, but to children playing youth sports, as well. They, too, will benefit from the installation of artificial turf at Centreville.

“SYA has never been able to come here because there aren’t enough fields,” said Sanabria. “Real, grass fields have to rest, be reseeded and grow for the high-school seasons, and cleats, weather and usage hurt the fields. As a result, we’re always fighting for space; so our practice and game fields have never been used by anyone but the school.”

The fields are also needed on a daily basis by the P.E. classes. Currently, when the fields are soaked because it’s rained all night, they can’t be used. “So we’ll group in the gym,” said P.E. Department Chairman Katherin Strobl. “But it’s hard to teach there if too many classes are in there at the same time.” So with artificial turf, she said, “The kids would get more play time and be more active.”

Heavy rains won’t be a problem with synthetic material, Sanabria explained, because “the new fields will just absorb and drain the water. We’ll be able to jump right on them. And parents will be able to plan their days because games won’t have to be cancelled and rescheduled [due to rain or field conditions].”

“It’ll also decrease game delays after lightning, for example,” added Strobl. “There won’t be puddles and big chunks of grass taken out.”

With SYA teams playing at Centreville, said Sanabria, the school will become a place “where the community can come and watch their kids play.”

“And [both parents and children] can start making a connection to the school, if they’re going to go here,” said Strobl.

She said artificial-turf fields are also cost-effective because “you don’t have to water, reseed, level and repair the fields.” And, said Sanabria with a big smile, “No more fertilizing. Now, we probably spend close to $72,000/year doing all these things.” They both noted, as well, that it will no longer be necessary to repaint the lines or use manpower to maintain them.

So for all these reasons, Centreville decided to convert its football-stadium field and its practice field to artificial turf. The total cost is about $1.25 million, and the school wants to start the installation this month. So about a year ago, Sanabria began soliciting donations.

“I gathered the important players of the Centreville community,” he said. “I could not ask for better people to help, and it’s amazing how many people have come forward in support of this project. The SYA executive board and its president, Gary Flather, have been so instrumental in helping us raise money. They’ve raised $300,000, and it’s been a fantastic partnership with them.”

Besides that, said Sanabria, “There’s also no way we could have accomplished this without the help of Supervisors Michael Frey [R-Sully] and Pat Herrity [R-Springfield] who found $275,000 for us. They really took the time to help the community they serve.”

In addition, the parents of Centreville High’s Athletic Booster Club applied for a county, community-use grant on behalf of the school. “This grant is specifically for artificial-turf fields and is highly competitive,” said Sanabria. “So we received one of the two available grants — for $175,000 — in February, which was fantastic.”

The Booster Club will also contribute $300,000, itself, to match SYA’s donation. And so far, another $16,000 was raised from the sale of bricks. “Parents and grandparents bought them as graduation presents, and some groups of alumni and friends bought bricks together,” said Sanabria. “Elementary-school teachers also purchased them to wish luck to their former students, now at Centreville.”

Furthermore, he said, “Between [Principal] Mike Campbell’s office and my office, we’ve raised $100,000 on our own. This includes a collection the kids took up, athletic gate receipts and private contributions.”

Sanabria said the latter ranged in amount from $10,000 to $20,000 and came from small companies and private individuals “who thought this was a worthwhile cause helping kids of all ages. And we will recognize these people at our first football game so everyone will know who they are.”

However, he did reveal some of them, including the Carney Foundation, which donated at least $75,000. And Centreville High parents Tom Healy and Brian Newell — who’s also the girls’ lacrosse coach and assistant football coach — worked to bring in some $65,000 in personal contributions from the community.

Altogether, the school has now amassed $1.185 million, but still needs $65,000 more. So it’s holding a casino night, June 2, in hopes of raising the rest of the money then. “It’ll be held at the Paradise Springs Winery in Clifton, which has generously given the space to us for that night,” said Sanabria. “And a Centreville alumnus who’s a local deejay is donating his time for the event.”

The school will also continue selling bricks until the end of this month. And anyone who just wants to make a donation toward the cause may do so at www.wearecville.com and click on “Cats Casino Night.”

“This is our one, last push to raise funds,” said Sanabria. “And we hope the community will dip in their pockets one more time to help us reach our goal.”