Local students who worked at Greenspring are candidates for $6,000 in scholarships toward higher education. 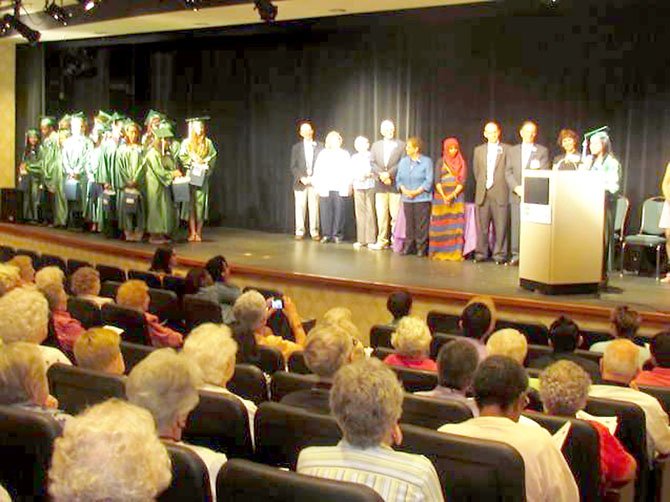 Rendha Maharosa speaks to her fellow Greenspring Scholars at a May 23 ceremony at the Springfield retirement community. The 19 scholarship candidates for 2012 were dressed in cap and gown and recognized for their commitment and service to the Greenspring community. Photo by Jessica McKay

Since 1999, Greenspring Retirement Community has awarded scholarships to local high school students who have worked in various dining services capacities at the retirement community. In addition to receiving a wage, students may be eligible for scholarships paid directly to the college or professional school of each student’s choice. Three years ago, the scholarship amount was increased from $4,000 to $6,000 per student ($750 per semester).

The community is currently in the process of creating a Scholars Fund Endowment in order to establish larger scholarships for the future, according to Jessica McKay, Greenspring’s public affairs manager.

"The funds for the scholarships are raised from voluntary donations made by residents, resident clubs, and staff members at Greenspring. Throughout the past 13 years, Greenspring has raised $1 million for the Scholar’s Fund," McKay said.

Criteria for student eligibility includes working 1,000 hours or more at the community during their junior and senior years of high school; achieving satisfactory grades and interviewing with the Greenspring Resident Philanthropy Committee.