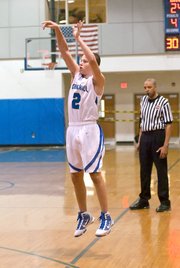 Former Churchill guard Will Lewis (2011) was recently named to the 2011-12 Founders League All-League team while playing for The Loomis Chaffee School (Windsor, Conn.) as a post-graduate. The Founders League participates in the New England Prep School Athletic Conference and consists of the following nine members: Avon Old Farms, Choate Rosemary Hall, The Hotchkiss School, Kingswood-Oxford School, Kent School, Taft School, Trinity-Pawling School, Westminster School and Loomis Chaffee. Lewis, a 6-foot-2 guard, was the Pelicans’ leading scorer during the 2011-12 season at 11.9 points per game and led the team in 3-pointers made with 47. He plans to play at Denison University in Granville, Ohio, this fall under head coach Bob Ghiloni.

The Bethesda Big Train dropped to 1-4 with a 2-1 loss to the Herndon Braves on June 11. Michael Bass (UNC-Wilmington) and Adam Berry each had two hits in a losing effort.

On Sunday, Bethesda picked up its first win of the season with an 11-0 victory against the D.C. Grays. David Wayne Russo (San Jose State) earned the win, allowing one hit in six innings while walking three and striking out seven. Tucker Tobin (George Mason) led the way offensively, finishing 3 for 5 with a home run, a double and two RBIs.

Bethesda will travel to face the Silver Spring Takoma T Bolts at 7 p.m. on Wednesday, June 13 at Blair High School. The Big Train’s next home game is at 7 p.m. on Thursday, June 14 against the Southern Maryland Nationals.

A 2011-12 CRCA All-American, Goral was the coxswain for the Heron varsity eight, steering her crew to gold medals at the Head of the Genesee and Liberty League and New York State championships. The William Smith varsity eight also captured a silver medal at the Head of the Fish and finished third in the grand finals at the ECAC National Invitational Rowing Championships and the NCAA Division III Rowing Championship. The varsity eight was also named Liberty League Crew of the Year.

The William Smith rowing team recently completed one of the most successful seasons in school history. The Herons captured their second straight Liberty League Championship, put all four of its entries on the medal stand at the New York State Championships, winning the NYS All-Point Trophy for the first time, earned a bronze medal at the ECAC NIRC and finished fourth as a team at the NCAA Championships, thanks to a third place finish by the varsity eight and a fifth place showing by the second varsity eight.