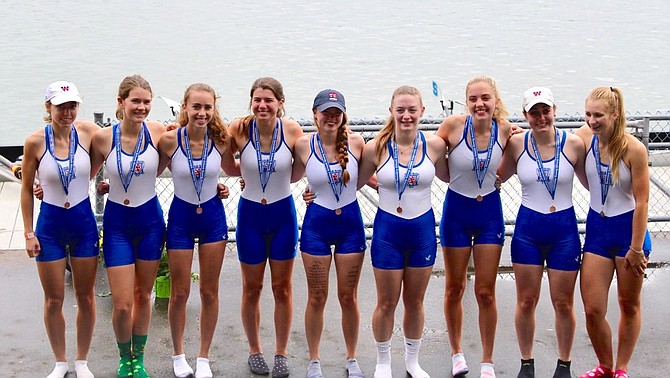 The T.C. Williams crew women’s lightweight eight took a bronze medal at the Canadian national championships, coming from a fifth place finish in the heats to surprise the watching crowd at the invitational race for top high school crew teams in North America.

The TC crew team is famous for the drum that travels to regattas: It was beating steady time as the lightweight women stroked through the water on a gray late spring day. The TC team were facing bigger teams. The lightweight category in crew comprises women and men of smaller stature than those who row on heavyweight boats. Before each race, they must weigh in at under 130 lbs for high school women and under 150 for high school men. But in Canada, the weight limit for women is 138 libs.

The win ended and capped the season for the TC crew team. Some of the traditionally strong women’s varsity boats faced tough competition in the rapidly growing Virginia league, while the men’s team had an unusually good year. In the final weeks of the season, the T.C. Williams team leaned on lightweights for good showings at national races.

They delivered: The women’s lightweight eight won the state championships rowing in the junior varsity category, and placed fifth at the Stotesbury Cup Regatta in Philadelphia. The men’s lightweights were also state champions, rowing in four-seat 2V and 3V categories, and contenders at the national level, making finals in Philadelphia and Ohio. A men’s four and women’s double also won gold at states and competed nationally.