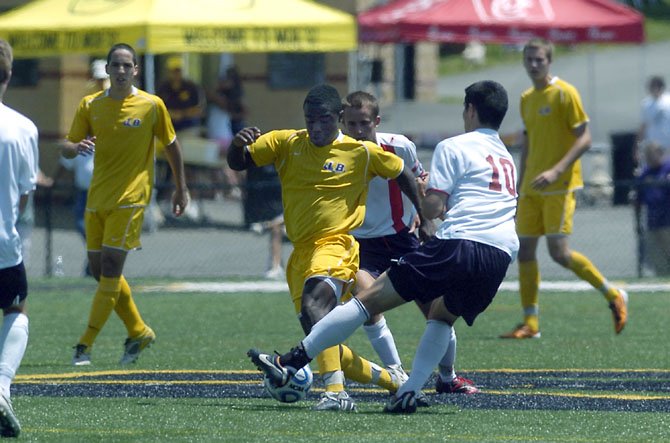 The season-ending loss marked the second straight year in which coach Joe Soos' Bruins were eliminated in the state tournament's round of four.

"No one expected us to get this far this year," said Lake Braddock team co-captain and senior defender Tyler Durbin. "I'm real proud of this team. Eventually, the wins started coming for us."

Lake Braddock was within a good break here or there of seeing its' season culminate with a showing in Saturday's state title game. Instead, it was the Patriots from Albemarle (Northwestern Region) who edged the Bruins in the extended semifinals contest to move on to the finals.

The Bruins and Albemarle competed in a battle of wills for 80 minutes of regulation play, 10 minutes of overtime (two 5-minute sessions), and then 10 more minutes of sudden death victory (two-5 minute sessions). Following the 100 total minutes of on-field play, the game was deadlocked at 1-1. As a result, the contest moved on to penalty kicks to decide the outcome.

There, following a short break in which both squads caught their collective breath, each team chose five players to participate in the PK format. Ultimately, the issue was decided in the fourth round of kicks when Albemarle's Jesus Durna converted his penalty kick to give his team three conversions to Lake Braddock's one. There was no need for a fifth and final round of kicks.

Overall, in the PK's, Albemarle converted three of its four kicks, while Lake Braddock made one of four. The Bruins missed their first three tries before junior midfielder Zack Hopkins grounded a hard shot into the left side of the net to keep Lake Braddock's fading hopes alive. But Durna's ensuing conversion for the Patriots clinched the win for Albemarle.

So, officially, Albemarle, by winning the penalty kick segment, earned a goal to its credit and thus the 2-1 win.

"I don't think it's an unfair way to end the game," said Bruins' junior midfielder Issac Villa, of the penalty kick format. "You have to be mentally tough [in PK's]."

ALBEMARLE OPENED the game's scoring nearly 11 minutes into the first half on a short breakaway goal off the right corner by Alex Bohn. On the play, the Patriots senior captain played a long ball kick moving forward before fending off a Bruin defender and chipping the ball over goalie Aaron Fausser and into the far side net. It was a beautiful goal in which Bohn had to put just the right touch on the ball to work the tough angle and get it past the goalie.

Later in the half, Bohn nearly helped his team score again when, on an Albemarle rush, he passed left to teammate Kai Marshall who, from 12 yards out, scorched a grounder shot on goal. But Fausser, the Bruins' senior net-minder, made an outstanding stop, diving for and covering the ball with nine minutes left in the half.

Over the next three minutes, Fausser made two more outstanding stops - deflecting Marshall's 12-yarder attempt from the left corner out of danger and shortly after stopping a close-range shot on goal try by Emmanuel Salido following teammate Marshall's free kick towards the goal area.

Lake Braddock, which had some good scoring chances in the first half, trailed 1-0 at halftime.

On two occasions early in the second half, Lake Braddock's Villa nearly scored on long free kicks from the right wing area. On both occasions, the lofted balls barely missed going in as the Albemarle goalie reached as high as he could to deflect or guide the ball over the crossbar.

But moments later, the Bruins finally found the net when Hopkins' close range header shot off a right corner kick assist from Villa tied the contest 11 minutes into the half. On the goal, Hopkins, from about 15 yards out from the near post, headed a crossing shot towards and across the goal area. The ball crossed the goal line at the far side of the net. Lake Braddock's Durbin, all alone where the ball was, actually pounded the ball into the net and it appeared he might have scored the goal. But it was ruled that the ball, off Hopkins' header, had already crossed the line.

Just like that, the game was tied and the Bruins had new life.

Beyond the midway mark of the half, Albemarle fast break attempts were thwarted on two occasions on stops by Fausser, who played an outstanding game for the Bruins.

Neither team could score again in regulation, so the contest went to extra play.

In the final couple of minutes of the first five minute overtime session, Bruin players Aaron Hollins and Durbin both made good shots on goal. Both teams, over the overtime sessions, made strong rushes at the net which came up empty.

Penalty kicks would have to decide the affair and Albemarle, after two rounds of the PK format, led 2-0 and went on to the win.

"Both teams played a good, hard game right to the end and the game went to penalty kicks," said Durbin. "Their keeper made some good saves."

"Albemarle is a big, fast team and they have a good counter attack," added Villa. "I thought the game was pretty even and either team could have scored at any moment."

The postseason, overall, was a good one for the Bruins, who reached both the Patriot District and Northern Region tournament title games. At states, Lake Braddock won its quarterfinals round contest at Cosby High (Central Region), 2-1, on June 5 to advance to the semifinals. Overall, Lake Braddock went 6-3 in the postseason.

"We tried to get better every day," said Villa, of Lake Braddock's season. "We got hot at districts and from there we took it one game at a time and kept going further."