Chargers jump out early before Saxons rally for a 12-8 win. 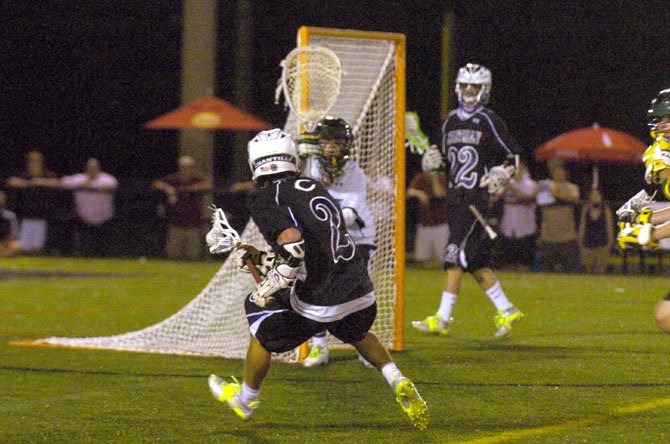 Chantilly — Northern Region high school boys' lacrosse rivals Chantilly and Langley, who in recent years have proven to be the best public school teams in Virginia, met once again for the state crown last Saturday night.

Langley entered the game as the three-time defending state champion. In both 2009 and last year, the Saxons defeated Chantilly in the state finals. In 2010, Langley defeated the Chargers in the state quarterfinals round on way to the championship.

So the two teams meeting again in Saturday's finals game at Westfield High School was nothing new for either club. The Chargers had to find a way to get past their nemesis, while the Saxons had to defeat their toughest competitor if they were to win a fourth state crown.

Langley did go on to win the stirring final contest, 12-8, in front of a huge early summertime crowd.

"Coach [Earl] Brewer told us [after the win] that we've all made our mark in [Northern] Region and Virginia State lacrosse history," said Langley senior goalie Andrew Spivey, in the minutes following the win.

Langley, going up against a Chantilly team determined to finally get the better of the Saxons in a state title game, fell into an early 3-0 hole over the first five-and-a-half minutes.

Chantilly's large, animated crowd, located in the stadium's far side bleachers, was totally amped up as a result of the early lead. The third goal during that spell came on a sizzling, bounce shot from junior midfielder Mike Marson off the left wing from 10 yards out with six minutes, 34 seconds remaining in the first quarter.

But Langley, despite the poor start, regrouped in a big time way with three straight goals of its own, over the following two minutes, to tie the game at 3-3. Chantilly, however, would get the final goal of the opening quarter when Marson capped a Chargers' picturesque fast-break with a score to give the Chargers a 4-3 lead. Chantilly, on the scoring sequence, passed the ball efficiently and, in a snap, moved right down the field. Chantilly senior attack Daniel DeCenzo earned the assist on Marson's goal.

Chantilly, two minutes into the second quarter, capped a solid possession of good ball movement with a straight range goal from sophomore midfielder Conor Kelly from 15 yards to make it 5-3 Chargers.

The Saxons, over the next five minutes however, scored twice to tie the game again, at 5-5.

A few minutes later, Chantilly's Luke Bowers, in traffic around the Langley goal area, made a terrific play, somehow getting off a quality shot. The ball went in and Chantilly, once again, had the lead, 6-5.

But the Saxons came up with the equalizer with 26 seconds left when senior attack Josh Sibio (3 goals) scored from 15 yards out moving right across the goal area to deadlock the game at 6-6 going into halftime.

Although Langley had never led in the first half, it had thrice come back to tie the score. The Saxons, with the final goal before the intermission, had somehow seized the game's momentum.

LANGLEY WAS SIMPLY outstanding in the second half, dominating the first five-plus minutes in building up what would be an insurmountable 10-6 advantage. Outstanding ball possession characterized Langley's success over those opening five minutes of the half. Chantilly scored at the 3:10 remaining mark of the third — thanks to a nifty move and close range shot off the left side from junior midfielder Conrad Unterkofler — to get within 10-7.

Chantilly, a few minutes into the final quarter, got even closer when DeCenzo, moving with the ball from behind the goal, scored on a wrap-around shot that got the Chargers within 10-8.

Moments after that, Chantilly, with a man-up advantage, looked as if it would get even closer but Langley goalie Andrew Spivey made an outstanding save on a close range attempt by Chantilly's Bowers to keep the Saxon lead at two goals with 7:40 remaining.

Three minutes after that, Langley got perhaps the game's biggest goal when Josh Sibio, from eight yards out, found the net to make it 11-8 Saxons with 4:07 showing.

At about that time, a chant from the Langley High student body section, "It's a Fourth-Peat, it's a fourth-peat," began reverberating from the near-side bleachers, where the large group of Saxon student supporters were perched, and throughout the stadium.

Langley controlled the ball most of the remaining four minutes of the game and added one more score in the final minute.

Despite the early deficits of 3-0 and 5-3, Langley had collected itself in the latter stages of the first quarter and gone on to play a superb game.

"We've been down before," said Spivey, afterwards. "I never felt at any time we were totally out of it. We all know exactly what it takes to win. We were down three goals [early] but didn't panic."