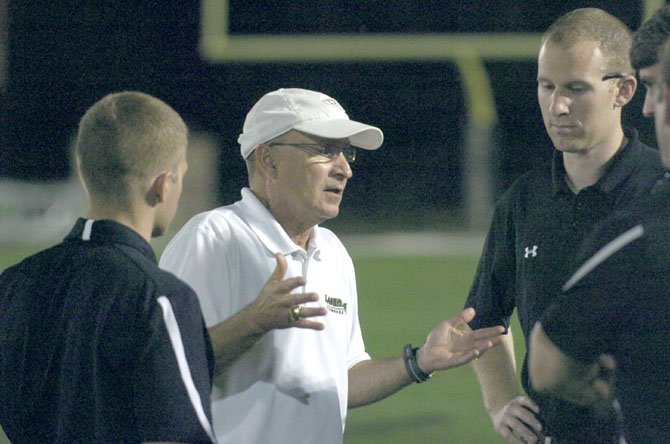 Great Falls — The chant from the Langley High student body began with about four minutes remaining in last Saturday night's Virginia State Boys Lacrosse championship game at Westfield High School between the Saxons of Langley and Chantilly High. "It's a Fourth-Peat, it's a fourth-peat," is the way the chant went, reverberating from the near-side bleachers, where the large group of Saxon student supporters were perched, and throughout the stadium.

Langley, in fact, was about to capture it's mind boggling fourth consecutive state crown. Ahead by three goals with the final minutes counting down, the Langley fandom sensed another title was nearly clinched.

Langley did go on to win the stirring contest, 12-8, in front of a huge early summertime crowd. The victory marked the third time in four years in which the powerful Saxons have beaten Chantilly in the finals game.

"Coach [Earl] Brewer told us [after the win] that we've all made our mark in [Northern] Region and Virginia State lacrosse history," said Langley senior goalie Andrew Spivey, in the minutes following the win.

The Langley boys' team was not the only Saxons' outfit to be participating in a state championship game on Saturday evening at Westfield. Prior to the boys' finals, the girls' state title lacrosse game, between Langley and Oakton, took place. The Cougars, in that first finals game of the state championship night double-header, bested a Langley squad which was making its' first-ever appearance in the state finals by a score of 12-7.

All in all, it was a spectacular night for both Langley teams and their fans who had the rare opportunity to enjoy their teams competing back to back in the biggest games of the season.

IN THE BOYS’ FINALS, Langley, going up against a Chantilly team determined to finally get the better of the Saxons in a state title game, fell into an early 3-0 hole over the first five-and-a-half minutes.

Chantilly's large, animated crowd, located in the stadium's far side bleachers, was totally amped up as a result of the early lead. But Langley regrouped in a big time way with three straight goals of its own, over the following two minutes, to tie the game at 3-3. Saxon sophomore attack JT Meyer (2 goals, 2 assists on the game) scored his team's first two goals, the latter coming on a sidearm chance as he moved left to right across the goal area, and senior midfielder Clay Rivers (2 goals) tallied the equalizer on a sizzling liner over his left shoulder from 14 yards out.

Chantilly would get the final goal of the opening quarter for a 4-3 lead, but Langley had answered the Chargers' early firepower.

Langley continued battling from behind in the second quarter following a Chantilly score two minutes into the frame that made it 5-3 Chargers. The Saxons, over the next five minutes, scored twice - scores from junior midfielder Luke Salzer (1 goal, 2 assists) and junior defender Brad Dotson - to tie the game again, at 5-5. The latter score was particularly outstanding as Dotson carried the ball about 40 yards down the field before connecting on a shot off the right from 14 yards away.

A few minutes later, Chantilly's Luke Bowers, in traffic around the Langley goal area, made a terrific play in somehow getting off a quality shot. The ball went in and Chantilly, once again, had the lead, 6-5.

But the Saxons came up with the equalizer with 26 seconds left when senior attack Josh Sibio (3 goals) scored from 15 yards out moving right across the goal area to deadlock the game at 6-6 going into halftime. The score was set up by Dotson, who once again made a wonderful jaunt down the field before passing left to Sibio, who came up with the big goal.

Although Langley had never led in the first half, it had thrice come back to tie the score. The Saxons, with the final goal before the intermission, had somehow seized the game's momentum.

Langley was simply outstanding in the second half, dominating the first five-plus minutes in building up what would be an insurmountable 10-6 advantage. Senior attack Michael Adams scored his team's first and fourth goals of the third period, the latter on a 12-yard grounder shot from a tough angle off the right side. In between Adams' goals, the Saxons also got scores from Sibio, off an assist pass behind the net from Meyer, and Rivers.

Outstanding ball possession characterized Langley's success over those opening five minutes of the half. Chantilly scored at the 3:10 remaining mark of the third to get within 10-7, the score going into the final quarter.

Chantilly made things interesting with a score that got the Chargers within 10-8 a few minutes into the fourth quarter. Moments after that, Chantilly, with a man-up advantage, looked as if it would get even closer but Langley goalie Spivey made an outstanding save on a close range attempt by Chantilly's Bowers to keep the Saxon lead at two goals with 7:40 remaining.

Three minutes after that, Langley got one of its biggest goals of the season when Sibio, from eight yards out, found the net to make it 11-8 Saxons with 4:07 showing.

That's when the chants of ‘It's a Four-Peat’ began echoing from the Saxons' student body.

Langley controlled the ball most of the remaining four minutes of the game. The Saxons put the finishing touches on the win when Adams, off an assist from Salzer, scored the game's final goal in the last minute.

Despite the early deficits of 3-0 and 5-3, Langley had collected itself in the latter stages of the first quarter and gone on to play a superb game.

"We've been down before," said Spivey, afterwards. "I never felt at any time we were totally out of it. We all know exactly what it takes to win. We were down three goals [early] but didn't panic."

Seventeen Langley seniors were dressed in the Saxons' dark green and gold uniform colors for the final time. Coach Brewer said the 12th graders and underclassmen alike have made an enormous impression on him.

"These are wonderful kids," he said. "I love them and will miss the [graduating seniors] tremendously," he said.

EARLIER IN THE EVENING the Langley girls, under head coach Richard DeSomma, gave it everything they had in their state finals game against an Oakton team playing in its second straight state title contest.

A year after losing in the state title game, Oakton took the next step and won this year's state crown with the 12-7 win over Langley.

"We competed and gave it our all," said Langley's Kelly Martins, a senior midfielder and a Saxon team captain. "Oakton is a great team and we knew that." It marked the first state championship triumph in the history of the Oakton girls' lacrosse program and came one year after the Cougars had reached the state title game before losing to Vienna cross-town rival Madison.

Oakton prevailed against a Langley squad which was making its first-ever state finals appearance. In the championship game matchup between the two Northern Region teams, the Cougars, who finished the season with an overall record of 18-2, jumped in front 3-0 and never relinquished the lead thereafter.

Counts, in the championship affair with the Saxons, saw her team play a solid, overall strong game in which the Cougars' played suffocating defense while, on the offensive end, running when they could and displaying good passing, ball movement, and patience. Six different Oakton players scored goals, with sophomore midfielder Jackie Rupp, celebrating her birthday, leading the way with four of those scores. Goalie Emily George, in the net, played a typically solid game with her Cougars' teammates in front of her doing a thorough job of keeping the Saxons at bay.

Over the game's first eight-plus minutes, Oakton gained the early momentum with three goals, the first two coming from Rupp. Her close range score off a drive from the left side opened the game's scoring with 22 minutes, 23 seconds showing on the clock. A few minutes later, Rupp, on another Oakton possession, gained open space with a nice move before moving to her right and scoring on a sizzling bouncer shot from 10 yards out at 19:21 to make it 2-0.

"Jackie is our coast to coast girl and plays full tilt the entire game," said Counts, with a smile. "She's really done a great job for us."

The Oakton lead went to 3-0 on a line drive shot from 10 yards off the right wing by senior midfielder Alex Revel (2 goals in the win).

Langley gained momentum over the next three minutes with scores from Martins and Sisson, the latter goal coming off a fastbreak to get the Saxons within 3-2 with 13:28 remaining in the first half.

Following a timeout, Oakton came out firing but saw two outstanding close range scoring chances turned away on nice stops from Langley standout goalie Erin Long. However, the Cougars broke through several minutes later when sophomore attack Tori Anderson, after taking the ball down the left side of the field, made a nifty turn-around move to create space from a defender before flinging a liner in from 18 yards out to five Oakton a 4-2 lead with 7:45 left.

George, the Oakton goalie, came up with one of the game's key plays a minute later when she blocked a quality penalty shot try on goal by Saxon Margo Swomley. That led to Cougars' possession of the ball and an ensuing Oakton score moments later when senior Claire Stikeleather (2 goals), moving left to right with the ball across the Langley goal area, roped a hard overhand shot in from 12 yards out to give Oakton a 5-2 advantage.

Both teams would score again before the end of the half. Langley's Glasgow, off a pass from Sisson, scored on a close range shot off a penalty chance to get the Saxons within 5-3. But Oakton answered with a goal from Rupp with 3:42 left to make it 6-3 Oakton. The Cougars, following Rupp's score, gained possession again on the face-off and worked three minutes off the clock. Langley, following a Cougar turnover, did make a good scoring try in the final seconds of the half but George stopped a Martins close range scoring attempt off the left side in the final seconds.

Langley showed its resiliency with a couple of scores - both coming from Soutter - over the following minute to get within 9-6. Glascow had the assist on the second score.

The Saxons looked as if they might score again off a fastbreak a few minutes later, but goalie George made a nice save to prevent a score and keep Oakton ahead by three.

The Cougars, over the following seven minutes, effectively put the game away with three goals, two coming from senior attack Carly Palmucci.

Langley, down 12-6, got a score from Soutter with five seconds remaining for the game's final goal.

Langley, which qualified for states last year for the first time, was making its first appearance in the finals.

"It started in the off-season before our practices even started on Aug. 29," said Martins, of the Saxons' tremendous season. "We wanted it this year and everyone came together."