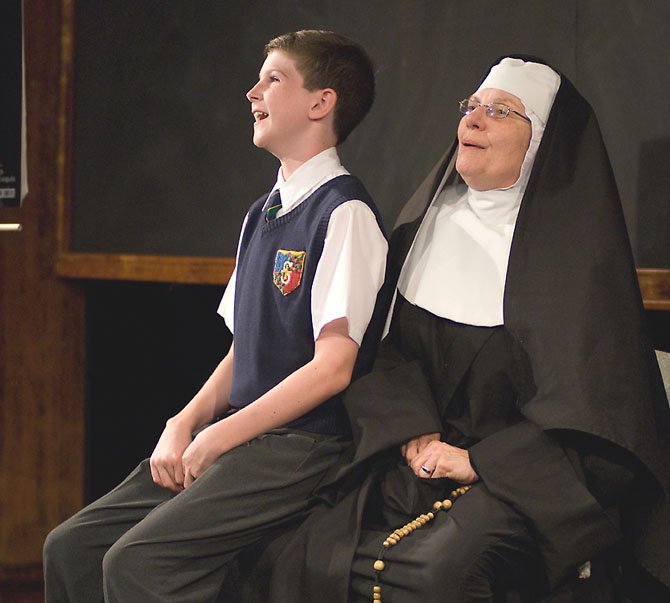 Arlington — With the Catholic Church in the news over issues such as the federal health care law, it seems timely to see The American Century Theater’s performance of “Sister Mary Ignatious Explains It All For You,” Christopher Durang’s comedy.

Sister Mary Ignatius, played by Cam Magee, the play’s namesake, is a very strict and conservative nun who teaches at a Catholic school in 1979. For director Joe Banno, who went to Catholic school when he was young, the play is “more documentary expose than satire. It’s so accurate to the way these nuns were.”

Most of the play focuses Sister Mary explains the basic tenets of the Catholic Church to the audience with the help of one of her students, Thomas, played by Colin Trinity. Everything from the 10 Commandments, to what heaven and hell are and how one ends up in either of them, to what constitutes a sin, all of which she says must be accepted without question.

When the play first premiered in 1979, it was considered controversial, and still is today.

“Some conservative Catholics were offended by the play’s stereotyping,” said TACT in a press release, noting there were major protests against the play and even attempts to ban it.

Christopher Durang, playwright, also shared Banno’s feelings. According to Durang’s website, www.christ opherdurang.com, the play was written out of his experiences in Catholic school when he was young. Grant Cloyd, one of the actors in the play, believes that the play was his way of dealing with his experiences and trying to figure them out.

“Sister Mary Ignatious Explains It All For You” is being shown at Gunston Theatre II on 2700 South Lang St. in Arlington. Show times for the play are Thursday through Saturday at 8 p.m. and with matinees on Saturday and Sunday. The last show will be on Saturday, July 7.