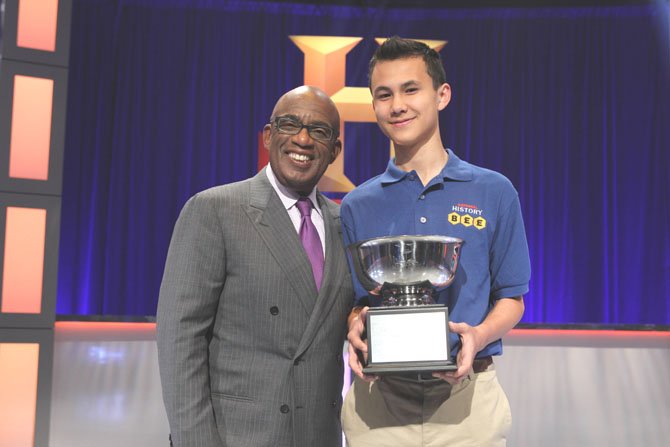 Al Roker from The Today Show with Tajin Rogers, winner of the National History Bee Competition on June 1. Photo Contributed

Who was the first U.S. President from New York? What pre-Revolutionary event involved an unauthorized boarding of the Dartmouth, the Eleanor, and the Beaver? Operation Glimmer and Operation Taxable were decoys created to distract German forces during what WWII operation?

This school year, thousands of students from across the U.S. faced tough questions like these in the first annual National History Channel "History Bee" Competition. The top scorers, one from each of 32 regions, qualified for a two-day National Championship held in Washington, D.C. from May 11-12. And, one young scholar – 8th Grader Tajin Rogers from Longfellow Middle School in McLean -- walked away with a $50,000 scholarship and a national championship title.

The History Channel aired the final rounds of this first-ever tournament in a two-hour television special on Friday, June 1. In this fast-paced competition, students raced to demonstrate their knowledge of history from a wide array of eras and disciplines.

Al Roker served as the moderator during the competition, asking the questions and interacting with the students competing. The television special was hosted by HISTORY/H2’s Brian Unger.

Joining them as a roving reporter was Rutledge Wood from History’s Top Gear, along with expert commentator Bob Harris.

Judges for the History Bee were as follows: Steve Gillon, Scholar-in-Residence for HISTORY and Professor of history at the University of Oklahoma; Rhonda Haynes VP, Editor-in-Chief of the K-12 Social Studies Department at Houghton Mifflin Harcourt (HMH) publishing company; and Greg Bossick, Assistant Executive Director for The National History Bee and Bowl.

The event is among the many educational initiatives supported by History to foster widespread excitement for, understanding of, and perspective about history among young people.