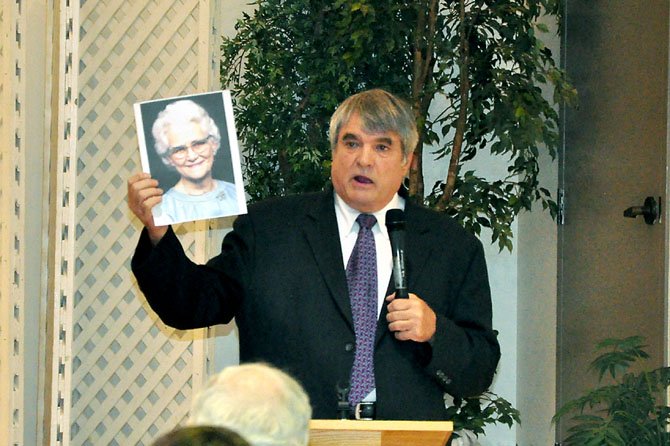 Bill Pelke, co-founder and president of Journey to Hope, an anti-capital punishment organization, holds a picture of his grandmother, who was murdered in 1985. Pelke and other speakers that have been affected by the death penalty spoke at St. John Neumann Catholic Church Monday, June 25. Photo by Alex McVeigh.

Reston — For most people, the death penalty is a concept that occasionally intersects their lives in the form of news reports about people from across the country. But for others, it is something that has taken someone away from them, or threatens to. St. John Neumann Catholic Church hosted a panel discussion of members of Journey to Hope, a group consisting of families of murder victims, as well as others who have been touched by the death penalty in America.

Charity Lee’s life has been marked by death, starting from a young age. In 1980, when she was 6, her father was shot to death in their Georgia home. Later her mother was arrested and charged for hiring someone to kill her father and faced the death penalty but was later acquitted.

"The state of Georgia was supposedly looking for justice for the victim, well, I was the victim. I lost my father," Lee said. "And they wanted to take my mother from me too. If she’s guilty, fine, lock her up, but if you kill her, I’m an orphan."

Lee said she spent the next two decades sorting out her feelings toward her mother, unsure of her guilt or innocence and is now convinced that her mother was guilty. Meanwhile, she had two children, a son Paris and daughter Ella. But tragedy was to strike her again, in an even more personal manner.

IN FEBRUARY 2004, she was living in Texas, her son was 13, her daughter 4, and Lee was a graduate student studying gifted education. While she was working her shift waiting tables, her son convinced their babysitter to go home early.

"The next thing I know, the police are at my door telling me my daughter is dead, which makes me faint. As soon as I revive, they tell me my son is the murderer, which makes me faint again," she said. "I stood outside the front of my house for six hours, knowing that inside is my daughter’s dead body and somewhere in the police station is my son."

Lee went on to describe the surreal circumstances of the next few months, going between choosing a funeral home for Ella and a defense attorney for Paris. After one meeting with a lawyer, a bombshell was dropped on her.

"The first thing the attorney says to me is ‘You know Texas is going to kill your son right?’ I fainted again," she said. "When I woke up, the only thing I kept saying is that he’s only 13. And the attorney looked at me and grabbed another law book and said ‘Oh, well aren’t you lucky, the Supreme Court outlawed child execution. But for those few minutes, I thought that my son was going to be murdered too. No mother should have to hear what I heard, even knowing that my son is guilty. How is losing both of my children justice?"

Lee eventually started the ELLA foundation in memory of her daughter. The letters stand for empathy, love, lessons and action, which she says is what her daughter taught her. She is also on a one-year tour with Journey to Hope, speaking about her anti-death penalty stance.

Terri Steinberg of Fairfax has also had her life touched by the death penalty. In 2001, her son Justin Wolfe was implicated in a murder-for-hire charge and has spent the last 10 years on death row. Though his conviction was recently overturned, the state of Virginia is appealing that decision.

"I always knew we had a death penalty in this country. I hated it, but being a busy mom I did nothing about it. I didn’t talk about it, I didn’t take any action against it," she said. "What I couldn’t understand is how we’d take a person who had been locked up and rendered helpless, walk them down the hall, strap them to a gurney and fill them with poison. It made no sense to me."

AFTER A MARCH 2001 SLAYING the shooter, Owen Barber, went on the run, and eventually implicated Wolfe. He avoided capital punishment by accepting a plea bargain that included testifying that Wolfe hired him to commit the murder. Barber admitted in 2007 in a sworn affidavit that he fabricated his testimony.

Steinberg remembers her son calling her to tell her that he planned on turning himself in, saying it would be sorted out in a matter of days.

"He turned himself into the system that he trusted and believed if he told the truth he would be set free," she said.

Steinberg described not leaving her house for weeks after the verdict, then when she did, she went to different churches and grocery stores, so not to be recognized. Eventually she joined the anti-death penalty cause, speaking about her son’s story.

"I realized I had to do something positive and fight for my son’s life and try and make a difference," she said.

Since he has been on death row, Wolfe has seen 18 fellow inmates get executed and has received two stays of execution.

Randy Gardner has already lost a family member to capital punishment. His brother Ronnie Lee Gardner was executed in Utah by firing squad in 2010 for the murder of a bartender during a robbery and the murder of an attorney during an escape attempt.

"The process they went through to execute my brother made me stop and think, what the heck are they doing in this world?" he said. "We felt like someone murdered our family member. Although we don’t condone what my brother did, we don’t condone the premeditated murder that was done to him."

Gardner has since started the Back to Basics Farm, where he teaches people about farming and his philosophies on life.

Journey to Hope president and co-founder Bill Pelke has been on the other end of the spectrum, though he shares Lee, Steinberg and Gardner’s opposition to the death penalty.

His grandmother, a bible teacher in Gary Ind., was murdered by four teenagers who wanted to rob her in May 1985. One girl, Paula Cooper, who was named the ringleader, was sentenced to die, and at 15, was the youngest person sentenced to die in America.

"I knew we had a death penalty in this country, and I felt if they didn’t give the death penalty to the person who killed Nana, they were telling us that she wasn’t an important enough person that her killer be put to death," he said. "And I felt she was a very important to me, so I was OK with the verdict."

A few months later, in November 1986, while working a night shift he began to reflect on his grandmother’s life.

"I thought of a picture of Nana that was taken a few weeks before her death, and I began to think I’d feel guilty if I couldn’t come up with some love and compassion, and I didn’t want to feel guilty when I thought of Nana, so I prayed for love and compassion," he said. "I eventually realized I didn’t have to see somebody else die to take away the pain of my grandmother’s death."

Pelke called the death penalty a "matter of revenge," but pointed out that nothing will bring back the dead, and the possibility for reform always exists.

"Paula Cooper will be getting out of prison later this year. I visited her, and it was the first time I’ve seen her in 14 years, and she’s developed into a wonderful Christian young lady," he said. "And when she is released form prison, I will be at the gates of the prison to meet her, and I will help her re-adjust back into society."

ALSO PART OF THE DISCUSSION was a photographic exhibit from artist Scott Langley called "Execution Timeline." It featured photos of a prison, narrowing its focus from the prison building to death row cells, to the table where prisoners have their last meal, then to the gurney where they are strapped down to receive their lethal injection and ending with a photo of a death certificate and a gravestone.

More information on Journey to Hope can be found at www.journeytohope.org.