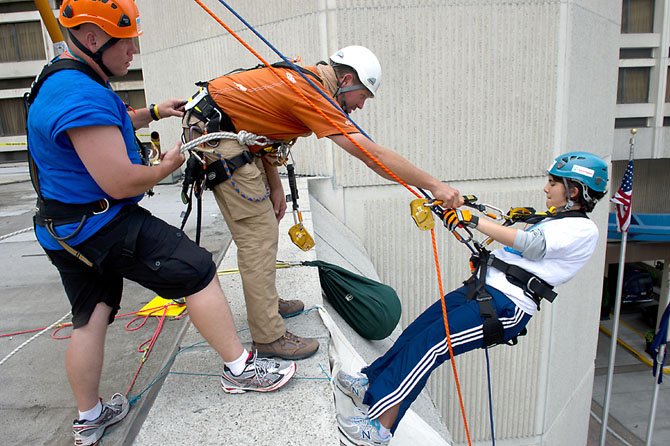 Special Olympics Virginia Athlete Rose Pleskow of Reston gets a helping hand from her ropes master Chris as she starts her 20 foot practice rappel above the entrance to the Crystal City Hilton in Arlington on June 22. After completing the 20 foot rappel, she’ll go to the 12th floor, climb up a flight of stairs to the roof, and rappel 100 feet down the outside of the building. Photo by Deb Cobb. 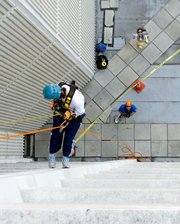 Rose Pleskow is not one to shy away from a challenge. The 23-year-old Reston resident competed in the Special Olympics World Summer Games in Athens, Greece, last summer, earned multiple medals in the 2012 Virginia Special Olympic Summer Games and recently competed in an 800-meter race in the waters around the Cayman Islands. But on June 22, she did something most people wouldn't dare: rappelling down the side of a 15-story building.

"Being in this event means a lot to me as a Special Olympics athlete and Global Messenger," said Pleskow, who participated in the first Northern Virginia "Over the Edge" fundraiser in Arlington.

Pleskow joined local celebrities like DC 101 morning show DJ Elliot Segal, of "Elliot in the Morning" fame, ABC 7's Steve Chenevey and Fairfax County Chief of Police David Rohrer in dangling 250-feet from the side of the Hilton Crystal City in an effort to raise awareness and funds for Special Olympics of Virginia.

"Nonprofits are facing a lot of challenges these days," said Paul Griffith, who started Over the Edge in 2004 as a one-time fundraising event in his native Halifax, Nova Scotia. "There are only so many walks or runs you can do. Rappelling is something different and a more exciting way to bring awareness to an organization like Special Olympics." 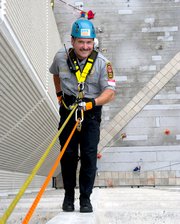 Fairfax County Police Chief David Rohrer is at ease as he rappels down the side of the Crystal City Hilton in Arlington on June 22. He’s not practicing with the SWAT team, he’s rappelling 100 feet to raise money for Special Olympics Virginia.

Participants had to raise a minimum of $1,000 for the "privilege" to go Over the Edge. Pleskow exceeded her goal, raising $1,125 through a website for the event and $4,105 to date for Special Olympics.

"Special Olympics has taught me to be very proud of myself for who I am and to be more independent," said Pleskow, who travels across the state as a global messenger for Special Olympics. "This was an amazing opportunity."

Sixty-eight rappellers participated in the event, raising more than $60,000. For more information on Over the Edge or how to participate next year, visit www.OverTheEdgeVA.com or follow Special Olympics of Virginia on Twitter at @overtheedgeva.