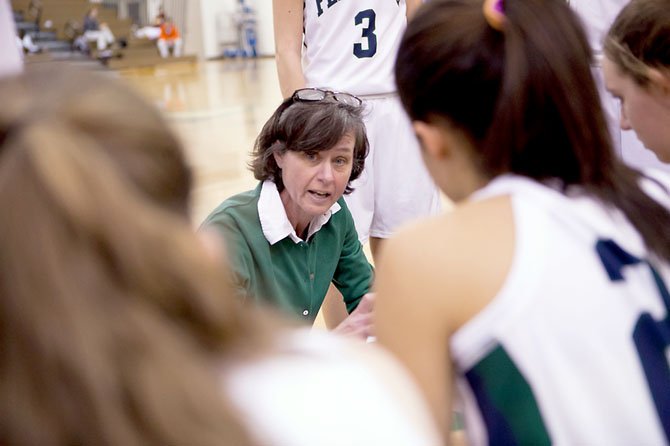 Jody Patrick, Flint Hill School’s head varsity girls’ basketball coach and P.E. teacher, was invited to attend a special function at the White House on Wednesday afternoon, June 20, to mark the 40th anniversary of Title IX, the landmark statute that ensures equity between boys and girls for all educational programs that receive federal funding. The event was hosted by Valerie Jarrett, Senior Advisor to President Obama and Chair of the White House Council on Women & Girls, and the Council’s Executive Director, Tina Tchen.

The invitation was extended to "notable women and men from the fields that have been greatly impacted by Title IX, from athletics to education." Participants celebrated the achievements afforded by Title IX, and a panel that included tennis icon Billie Jean King discussed "the past, present, and future of this landmark legislation." During her remarks, King called for all the coaches in attendance to stand and be recognized for their hard and needed work at the grassroots level. "It was pretty amazing," Coach Patrick said, "to tip our caps before BJK!"

Coach Patrick, who in January notched her 200th career win, also serves on the USA Basketball Women’s Developmental Under-16 National Team Committee. Last October, the School hosted a group of female athletes from Tajikistan who are working as coaches and hold fighting expertise in the areas of Free-style Wrestling, Boxing, or Tae Kwon Do. Coach Patrick helped to facilitate their three-week visit through the U.S. State Department’s SportsUnited program; she and other members of the FHS Girls’ athletic program spoke with the delegates about the history of women’s sports in the U.S., including the 1972 Title IX legislation, credited for initiating a major turning point in gender inequality.

"So much of who I am, how I teach, and how I help young student-athletes find themselves rests on the shoulders of the women who attended this White House Title IX Celebration," Coach Patrick said. "Living history took on a deeper meaning for me through this gathering. I am truly blessed. Billie Jean King, Donna de Varona, Nancy Hogshead, and the other pioneers, we thank you!"