A Story of Courage and Survival
Votes

A Story of Courage and Survival 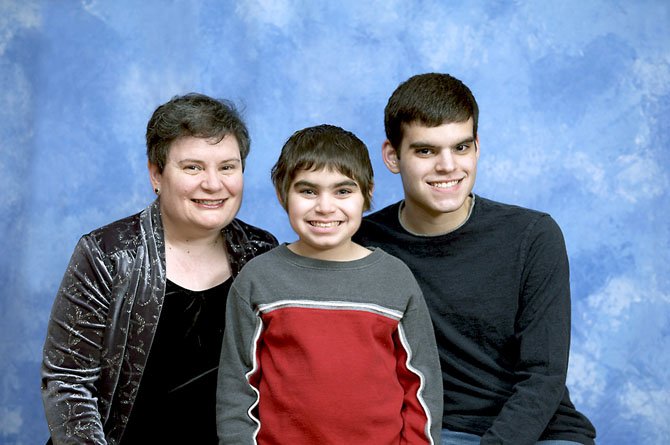 From left are Carmen Justiniano and sons Natanael and Jose in May. Photo Contributed

Natanael Justiniano and his friends at Bonnie Brae Elementary on May 14, Natanael’s first day back at the school since Jan. 24, 2011. From left are Will Talley, Catrina Sutherland, Hope Blahusch, Lucy Talley and Natanael.

Natanael Justiniano is just 11 years old, yet he’s beaten leukemia twice and just celebrated his one-year anniversary of a lifesaving blood transplant. And before the school year ended, he returned to Bonnie Brae Elementary part-time to finish the last month of fourth grade with his classmates.

He lives in Fairfax with his single mother Carmen and his brother Jose, who just graduated from Robinson Secondary School. And together, they’ve faced seemingly insurmountable challenges with courage, grace and love. But it hasn’t been easy.

"I had to push down all my feelings so I could keep a clear mind to make decisions," said Carmen Justiniano. "I had to take care of my kids. If I’d let myself feel the whole weight of the fear and terror of losing my child, I wouldn’t have been able to cope."

THEIR ORDEAL began in August 2006, when Natanael, then 5, was diagnosed with acute lymphoblastic leukemia (ALL) – a disease that came with a prognosis of an average of nine months left to live. But doctors fought hard and so did Natanael.

Over the next two and one-half years, he endured 24 spinal taps, 10 days of cranial radiation, months in Inova Fairfax Hospital and 694 rounds of chemotherapy. "I took 11 months off work after he was diagnosed," said Justiniano. "Our whole lives revolved around his treatment and protocol."

But then, in Oct. 2008, she was diagnosed with breast cancer and began her own battle. So while trying to be strong for Natanael and take care of Jose, she had to deal with chemo, herself.

Luckily, "Natanael had resilience," said Justiniano. "He experienced a lot of pain, but quickly bounced back and was happy. He distracted himself with TV and video games. In his imagination, he was the character and was able to ‘be outside and be free’ while confined."

Natanael finally went into remission in February 2009 and made it almost two years before relapsing. The leukemia returned Jan. 24, 2011, sending him back to the hospital for 50 more rounds of chemo, in addition to spinal taps, bone-marrow aspirations and two surgeries.

"Because of his treatment for leukemia, he got a secondary tumor in his parotid gland," said Justiniano. "So in March 2011, it was removed; but it’ll have to be monitored because it could grow back." Through it all, she said, "He’s been like a hero. Natanael had the joy to live."

Two months later, on May 16, 2011, his wish took a big step toward reality when he received a cord-blood transplant at Duke University Children’s Hospital in Durham, N.C. This time, though, said his mother, "He was more aware of the world he was missing. He was eager to be a normal boy and be around his friends."

First, though, Natanael had to get better; and little by little, he did. "I’ll never know who donated the umbilical-cord stem cells for his transplant," said Justiniano. "All we know is that they were from a girl."

Today, doctors say his blood is 98 percent donor cells – signifying that the transplant was successful. But he still has to beware of any infections and must take more than three dozen medications a day.

Natanael’s illness also affected his education. He couldn’t attend kindergarten or first grade and, instead, received homebound schooling. He started second grade before his mother’s diagnosis, but only went half a year, so she had him repeat second grade, the following year.

He relapsed during his first semester of third grade and had to be taught at home until he returned part-time, May 14, for the end of fourth grade. Now, he’s attending summer school and will start fifth grade in the fall.

A cord-blood transplant costs $1 million, and 70 percent of families like Natanael’s go into bankruptcy. While insurance covered some of Natanael’s transplant cost, COTA expects his family’s out-of-pocket expenses to reach as high as $50,000. To donate to the Justinianos:

*Go to http://cotafornat... and see the "donate now" button.

*Send a check payable to COTA and write "COTA for NatanaelJ" on the memo line. Mail it to Children's Organ Transplant Association, 2501 COTA Drive, Bloomington, Ind. 47403.

NATANAEL LIKES building with Legos, playing video games and watching movies and hopes to someday become a chef. "It feels really great to be back at school," he said. "I didn’t like going to hospitals because you had to wait a long time and the [cancer] treatment was terrible. To pass the time, I’d watch the Food Network or the Cartoon Network on TV."

Meanwhile, although the family has medical insurance, not everything was covered and the Justinianos incurred a huge debt. "We’ve been through many years of medical expenses, and we’ve survived because of COTA’s [Children’s Organ Transplant Assn.] fundraisers," said Natanael’s mother.

The nonprofit helped refund some of the transplant expenses but, when Natanael was hospitalized for the procedure at Duke for four months, Justiniano stayed nearby and had to pay for her own living expenses. "The entire family suffers when a child has cancer," she said. "Jose’s college fund was used to pay for lodging and food."

"I’d been saving for him to go to college since he was in seventh grade," she continued. "But I had to wipe out both his and Natanael’s college funds when we went to North Carolina."

Nonetheless, Jose worked hard in school and graduated from Robinson with a 4.06 GPA. He’s been accepted in the Honors program at Virginia Tech to study aerospace engineering. And he was invited to the summer academy of the Virginia Aerospace Science and Technology Program at NASA in Virginia Beach.

Still, his mother, who’s also in remission from her illness, feels sad that – because of both her cancer and Natanael’s – Jose "didn’t get the attention he needed" from her. "He’s seen both his brother and his mother in treatment," said Justiniano. "The entire six years he’s been at Robinson, there’s been cancer, hospitalizations and chemo in his family."

A year has passed now since Natanael’s transplant, but Justiniano can’t quite let down her guard. "Now that it seems like he’s safe, all these feelings I pushed down are coming back like a tsunami," she said. "The cloud of relapse is always over you, so it’ll be awhile before I can relax."

Likening hers and Natanael’s cancer battles to a war, Justiniano said, "My life and my younger child’s life were threatened – and my healthy child was cheated out of all that time we couldn’t spend together. Now he’s going away to college, and I can’t get back the past six years with him. But when I feel overwhelmed, I say to myself, if I can have six years of peace now, then maybe I’ll feel like it’s behind us."