Billind Salhi, 8, will participate in Light The Night Walk.

Each year, The Leukemia & Lymphoma Society (LLS) holds Light The Night Walks to raise money for research and patient services. Locally, a walk will be held this Saturday, Oct. 5, at the Reston Town Center — and an 8-year-old Centreville boy will be one of the event’s Honored Heroes. 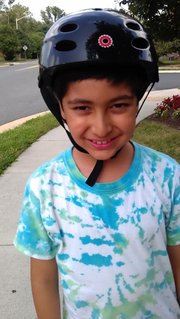 He’s Billind Salhi, a third-grader at Colin Powell Elementary. Diagnosed with leukemia in November 2010, he’s still undergoing treatment but, if all goes well, he should be done with it in January.

“Last year, he asked me, ‘Am I going to die from this?’” said his mother, Barizah Taib. “I told him, ‘Nobody’s told me you are.’ He understands that he has leukemia, a cancer, but he has a ‘good kind’ that’s able to be treated so it won’t come back.”

Billind lives in Centreville’s Faircrest community with his mom; dad Waria Salhi, a subcontractor and consultant; and sister Venus, 5, a Colin Powell kindergartner. And Taib’s currently expecting a third child, another girl. Taib came to the U.S. from Iraq in 1993 and has lived in Centreville 20 years. She’s completed medical school, but residency is on hold for now, while she raises her family.

She describes her son as “the nicest, sweetest boy you’d ever meet. He’s calm, organized and detail-oriented and enjoys playing piano and riding his bicycle. He also likes school and — because he’s missed so much [due to his illness] — he appreciates every day and minute he’s there.”

Leukemia’s a blood cancer and, said Taib, “For a parent, it’s a nightmare you can’t wake up from.” She said Billind’s problems began at age 5 in September 2010. After his first week of kindergarten, he ran a high fever for several days. His pediatrician did a blood test which revealed a very low, white blood-cell count.

But after more blood tests, she said, “They initially thought it was a viral infection, so we cried tears of joy. His counts improved and we thought he was fine.”

But two days after Halloween, Billind again ran a fever and his counts plummeted. This time, though, doctors saw some atypical cells and tested them — and that’s when they diagnosed him with leukemia. Another bone-marrow test confirmed it, and he started chemotherapy that day.”

For his mother, it was a new and frightening experience in more ways than one. “As a med student, I was always on the other side of things,” said Taib. “And now I was in the hospital [as a mom] with my 5-year-old crying and saying, ‘I’m scared.’”

At first, she said, “I don’t think I believed it. I cried at night, but I had to smile for my child. I also consulted all my colleagues from med school.” As for Billind, she said, “He was terrified. He didn’t like being in the hospital, being poked and having [tubes and medical equipment] attached to him.”

He received chemo for a month, plus a high dose of steroids and continual bone-marrow tests to see if the treatment was working. He was responding well to it so, after that month, he was considered to be in remission and began maintenance therapy.

“It’s three years of daily chemo at home,” said Taib. “And once a month at the clinic, he gets steroids and chemo. He also has a spinal tap every three months. Billind still gets anxious about going to the clinic. But I feel lucky, in a way, that there are treatments for him. I don’t want any parent to go through what I did.”

As for the upcoming Light The Night Walk, she said her son’s “very excited” to be designated an “Honored Hero” and get to participate in the event. “Our whole family will walk, along with some friends and other family members,” said Taib. “I feel honored, too, for him to be the voice of the rest of the kids going through this. And I think anything we can do to raise awareness of childhood cancer is a good thing.”

“The Light the Night Walks provide inspiration and hope for our patients and their families, showing them they are not alone in their fight, while remembering those that have lost their battle,” added Beth Gorman, executive director of LLS’s National Capital Area Chapter. “With the support of our walkers, corporate sponsors and media partners, we will walk to the end of cancer, and help make someday, today.”