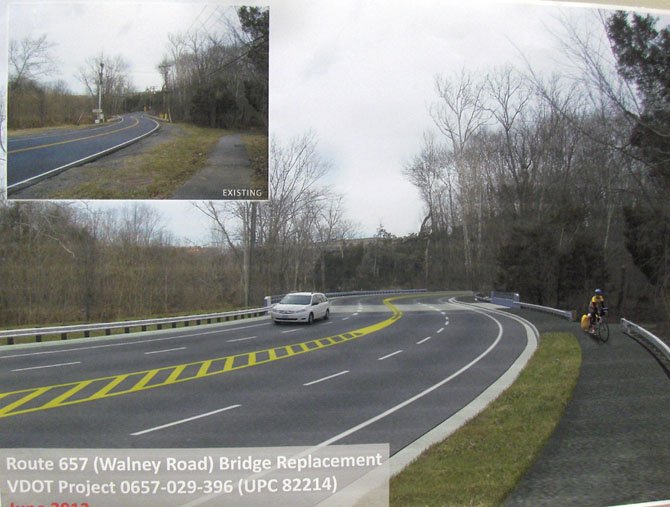 Centreville — Built in 1980, the Walney Road Bridge over Flatlick Branch in Chantilly carries more than 21,000 vehicles a day. Trouble is, it often floods, is disintegrating structurally and surpassed its life expectancy 15 years ago.

“It’s a low-lying bridge, so it’s frequently inundated, trapping debris by the beams and promoting corrosion,” he explained. “It has steel beams, but a timber deck – which is the least durable. It usually lasts 15 years; so 30 years is pushing it.”

The bridge is about 500 feet from the Walney Road/Westfields Boulevard intersection. And Roper presented details of the plan at a June 7 public meeting at the Sully District Governmental Center in Chantilly.

“Walney will be four-laned to Willard Road,” he said. “In addition, going north-south on Walney there’s a downhill curve. But under the new design, it will be smoothed out significantly to make it descend gradually. The road will also be raised 10 feet higher in the area where it currently dips down [as drivers leave the bridge], for better sight distance.”

After inspecting the bridge Feb. 14, VDOT determined it to be “functionally obsolete” and in “critical condition” and recommended it for an immediate upgrade. And with the deterioration and corrosion underneath, said Roper, “Weight restrictions on the bridge would be coming unless something was done.”

The bridge needs to be widened, as well. That’s because VDOT expects the average number of daily trips on it to increase to 33,000 by 2036. But so does Walney Road, so VDOT will advertise its widening from two lanes to four, up to Willard Road, in conjunction with the bridge project.

“But we want to eventually four-lane it from Willard all the way to Route 50,” said Roper. “That way, Walney will be four lanes all the way from Westfields Boulevard to the closest commercial properties on Route 50.”

Meanwhile, he said the new bridge will be a better design with a flat bottom and will be made of concrete for improved durability. The Fairfax County Board of Supervisors already approved funding for the project and it’s in VDOT’s Six-Year Plan.

The current bridge is 27 feet wide from curb to curb and almost 40 feet long. The new bridge will be 75 feet wide and 72 feet in length. It will have two, 12-foot-wide lanes in each direction; 5-foot-wide bike lanes on the northbound and southbound lanes; a 5-foot-wide sidewalk on the west side; and a 10-foot-wide shared-use path on the east side. Also planned is a 7-foot shoulder on each side.

Furthermore, said Roper, “The bridge will be eight feet higher at the stream than it is now. This project will dramatically change the bridge and the landscape. We hope to begin construction in summer 2014 and end in summer 2015. Right-of-way acquisition should start this fall.”

In response to audience concerns, he said VDOT would also consider adding one or two left-turn lanes, if necessary, to prevent an evening-rush backup from motorists on Walney coming from Willard to turn left on Westfields.

During construction, the bridge will be closed to traffic. Drivers will be detoured via Westfields Boulevard, Route 28 and Willard Road. “The detour is relatively short,” said Roper. “And closing Walney Road to traffic during construction will save eight to 10 months [work] time and $750,000 in construction cost.”