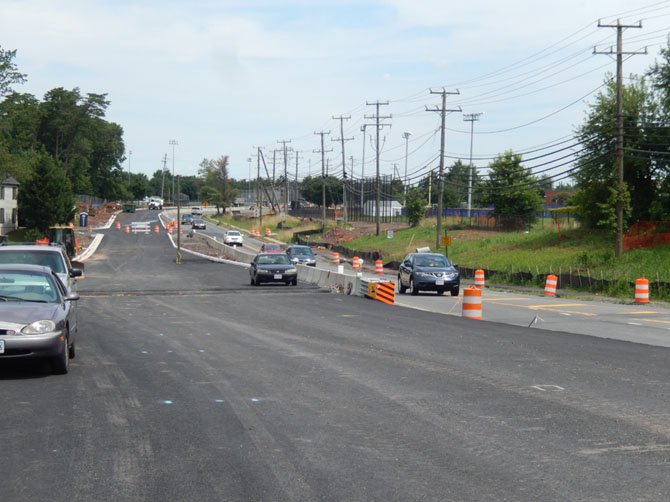 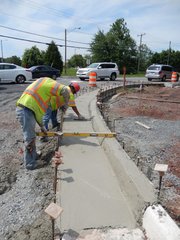 Workmen on Wednesday smooth and level a freshly cemented curb at the corner of Stringfellow and Poplar Tree roads.

on local road projects. A Fairfax County transportation bond was discussed, as well.

“There will be a transportation bond this year, probably for $100 million,” he said. “About 15 or 16 million will be for roadway projects and 84 or 85 million will be for pedestrian and walkway projects. That includes bike lanes and bike-way improvements, and that’s a huge shift. We used to do these bonds for roads and Metro.”

“I think there should have been a better balance,” continued Frey. “Some items are for pedestrian crosswalks that shouldn’t be paid for with 20-year debt, but with capital improvement funds.”

Locally, he said this year and next year will be busy with a slew of road and bridge projects. Said Frey: “A lot of the transportation projects we’ve been talking about for a long time are finally breaking loose because of VDOT money.”

The new bridge will have a four-lane capacity with bike lanes. Walney Road will also be widened from two to four lanes from 250 feet south of Mariah Court to Willard Road.

In addition, the downhill curve on north-south Walney will be smoothed out significantly to make it descend gradually. The road will also be raised 10 feet higher in the area where it currently dips down as drivers leave the bridge, for better sight distance.

Utility relocation should begin in September or October, with construction slated to start in January 2015, in hopes of a December 2015 completion.

Currently, Route 50 narrows from six lanes to four just west of Route 28 in Chantilly. But increased development and congestion in Loudoun County creates backups during much of the day on the existing four-lane segment, especially during morning and evening rush hours.

When completed, traffic-clogged Route 50 will have three lanes in each direction, improved turn lanes and traffic signals, curb and gutter on the outside lanes, crosswalks and pedestrian signals, widened and upgraded bridges, and pathways on both sides of the road. The road will also be more level and provide wider buffers between travel lanes and roadside hazards.

This $100 million improvement project should have three lanes open in both directions by May 2015. All the construction work, including permanent traffic signals, should be finished in November 2015.

Planned are four travel lanes — two, 12 feet wide, and two, 14 feet wide; a 10-foot multipurpose trail, a 6-foot sidewalk and a raised, 16-foot, grass median. And bicyclists will not only share the trail with pedestrians, but also pedal side-by-side with cars, trucks and buses on each outer, 14-foot lane.

Utility relocation has already been done and construction is now underway; it’s expected to be done in mid-summer 2015. Estimated cost is $63 million.

The costs are $4 million for the parking expansion and $1.5 million for the bus-transfer building, and they’ve been combined into one project. The goal is to enhance bus ridership and promote carpooling and, ultimately, the use of Metrorail when it’s someday extended to this area.

The county’s Department of Transportation will construct and maintain the building, and VDOT – which owns the land – will maintain the parking spaces. Cars will enter and exit the lot from the Stringfellow/Fair Lakes Boulevard intersection, and the existing entrance on Stringfellow will be for buses only. Construction is beginning this summer and should be completed in spring 2015.

It will be built six lanes wide to accommodate future traffic, but will initially be striped for four lanes. A 16-foot-wide, raised, grass, median strip will separate north- and southbound lanes. Each outer lane will be 15-feet wide, with the outermost three feet earmarked for bicycle riders.

On the bridge’s south side, a path will connect to existing trails. The north side will have a 5-foot-wide sidewalk connecting to the Faircrest community and existing sidewalks. Estimated cost is $16.3 million and anticipated completion is October 2015.

“The construction will cause some inconvenience,” said Frey. “But when you sit in traffic caused by construction, at least you know an improvement is being made.”

Work progresses along Route 29 in Centreville as part of the bridge replacement over the Little Rocky Run stream.

This project extends Poplar Tree Road across Route 28 from Stonecroft Boulevard to Walney Road. It also involves construction of a new access road to E.C. Lawrence Park and reduces congestion on both I-66 and Route 28.

“The Route 28/I-66 design will be a physically huge improvement,” said Frey. “If Braddock and Walney are to have access to Route 28, it’ll take separation and four ramps. Sometime before the end of the year, another [public] meeting will be held about it.”

“I’ve been told it’ll be in construction by 2017,” he continued. “It seems like a long way off, but it’s actually pretty aggressive when you consider that you’re dealing with a federal highway, environmental issues in E.C. Lawrence Park and a residential development.”