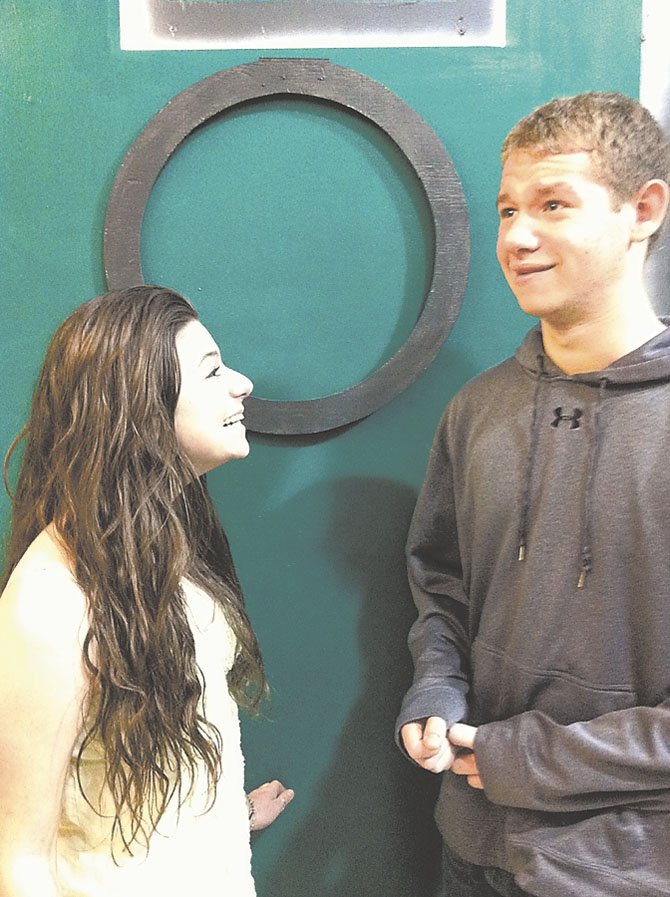 Kayli Modell (Dorothy) and Mitchell Myers (the Lion) in Wootton High’s production of “The Wizard of Oz.”

Wootton High School is “off to see the Wizard, the wonderful Wizard of Oz.” This beloved tale of Dorothy, the Tin Man, the Cowardly Lion and the Scarecrow has warmed the hearts of audiences since 1939 when Judy Garland introduced Dorothy with her ruby slippers to America.

Wootton‘s version will include lions, tigers, and even flying monkeys — yes flying. D2 Flying Effects, a theatrical flying company, will rig the stage with a series of harnesses and pulleys to support the flying monkeys and crows.

The production includes a cast of 60 Wootton students, an additional 30 elementary school “Munchkins,” 50 crew members and 50 students who perform in the orchestra.

The musical is an Americana classic — the fantasy tale of young Dorothy swept away by a tornado to the Land of Oz, and the adventures and characters she encounters in her pursuit to return home to Kansas.

“The Wizard of Oz plays to our purest American notions — the dream of a bigger life and then the appreciation for what we have,” Speck said. “With the tornados ripping through the Midwest just this past week, it’s not easy to forget that our stage tornado is a metaphor wrapped in the true Kansas Experience. Audiences will see the show now through the lens of ‘Wicked’ thanks to the book and the highly successful Broadway musical.”

While most of the songs are familiar to the audience — from “Ding Dong, the Witch is Dead” to “If I Only Had a Brain/Heart/Nerve” to “Over the Rainbow,” — Speck is bringing back some of the little known parts that were glossed over or cut from the movie, such as the big “Jitterbug” number in Act Two.

Junior Kayli Modell is thrilled to play the lead role of Dorothy: “I have grown up watching the film my whole life, so getting to play such a well-known role is really an honor and a lot of fun for me. I have learned a lot about acting and creating a character as well as a lot about dancing.” Choreographer Nancy Newell told her, “By the end of this show, you will be a dancer.” Kayli, who found dancing to be challenging, put her mind to it and now she found she can do it. “Oz” is her 5th show at Wootton. She also participates in a Wootton student-run a capella group, Chaos.

As the Cowardly Lion, senior Mitchell Myers has enjoyed putting his own character spin to his role. “The lion is a character that people can relate to because everyone gets nervous and scared, but he shows the irony of being a coward and what it does to people. This is such an iconic show that everyone knows. It has been an amazing experience for me.” Myers has been in Wootton plays and in Chamber Chorus since 9th grade.

The Scarecrow will be played by Adam Uslan, the Tin Man by Landon Fleishman, Glinda by Corrieanne Stein, the Professor/Wizard of Oz by Christopher Walkup, the Guard by Elgin Martin and the West Witch by Julia Wainger. Modell says, “Our show has absolutely amazing directors, and an outstanding cast, crew and orchestra — and I recommend that everyone see the production. It’s a great night for people of all ages and for the entire family.”