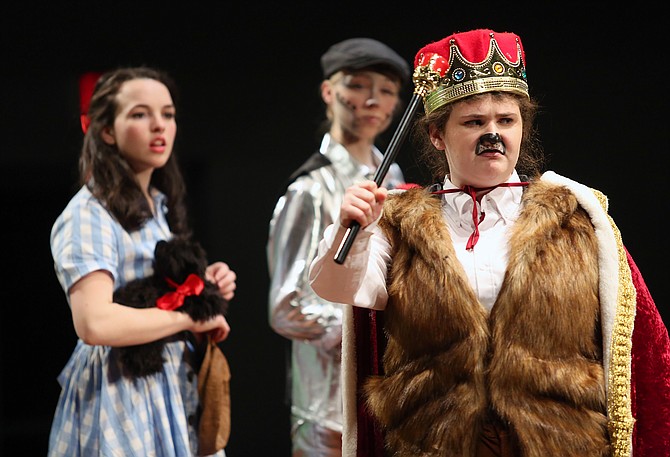 From left, Kiley Hatch, Edith Barvick, Eli Crishock in Oakcrest High School’s production of the ‘The Wizard of Oz.’ Photo by John-Paul Pluta

One ticket for the next twister to Oz, please! Oakcrest High School's The Wizard of Oz transformed the dull plains of Kansas into the merry old land of Oz in a heartwarming and nostalgia-filled production that sent audiences over the rainbow.

Originally a book authored by L. Frank Baum in 1900, The Wizard of Oz centers around Dorothy Gale, a farm girl from Kansas, and details her excursion through the magical city of Oz. The book served as inspiration for the 1902 Broadway musical, which was revived in 1942, 1987, and 2011. The most recognized medium of the story, however, is the 1939 film starring Judy Garland; featuring an iconic black-and-white to color transition, the film was nominated for six Academy Awards, winning Best Original Song for "Over the Rainbow" and Best Original Score. The story has moreover influenced a myriad of adaptations, including the 2003 Broadway musical Wicked and the 2013 Disney film Oz the Great and Powerful.

Ding, dong! The Witch may be dead, but her performance brought the show to life. As she taunted "Ring around the rosie, pocketful of spears!", the Wicked Witch of the West (Katiebelle Thompson) addressed the familiar, expected nature of the character and turned crowds on their heads with a high-energy performance that made the character captivating and fresh. With her clear characterization and iconic cackle which kept audiences on their toes, Thompson stole the show.

The Scarecrow (Ava Quaale), Tin Man (Edith Barvick), and Cowardly Lion (Eli Crishock) built off each other's energy with a natural chemistry as the unlikely trio supported Dorothy's (Kiley Hatch) endeavors into Oz. The consistency of Quaale's bent, unsupported scarecrow stance, Barvick's pin-straight posture for the metallic man, and Crishock's puffed out, lion-esque chest contributed to each character's unique persona. Most notable of the trio was Crishock; with the bark of a boxer but the bite of a baby, she perfected the act of faking confidence, and her comical turnaround from practicing her right hook to quaking behind her friends was laudable. The clarity of Crishock's voice was additionally stellar; while some struggled to properly project, Crishock was reliably crisp and enunciated.

Designer Mary Wall et al landed a major success with simple, but impressive hair, which became pivotal in denoting characters' genders among the all-female cast. Smartly designed braiding and pinning paved the subtle indication of male characters without detracting from the performance. Further emphasizing the ability and skill held by the hair design team was their careful consideration of Dorothy's hair evolution; her introductory pigtails gave the essence of Dorothy's naivety while her hair down in later scenes indicated a newfound maturity, with a simple red ribbon as a reminder of her creative spirit.

Costumes for the production, led by Bela Wilson, were additional commendable features, demonstrating clear vision and purpose in every decision. Particularly noteworthy was the beautifully diverse array of aprons and sweater vests and other pieces in Munchkinland, cultivating the message The Wizard of Oz strives to send, that a childlike joy must be preserved and protected from the monotony of life. The juxtaposition between those colorful, eclectic Munchkin costumes and the military, grayscale uniforms of the Winkies furthered that point, encouraging audiences to resist the clutches of homogeneity with vibrant individuality.

Dazzling and sparkling like ruby red slippers, Oakcrest High School's production of The Wizard of Oz functioned as a reminder that, though the yellow brick road may be long, a family with open arms awaits at the end of it.