Alexandria — Gregarious, sunny and 209 years old, Dorothea Dix, Superintendent of Army Nurses during the Civil War, charmed visitors to Carlyle House who attended a tea in her honor in the fall.

“I’m so pleased the War is over,” she told the 25 guests who sat at linen-draped tables on the chilly back terrace, sipping Southern Raspberry tea to warm up and munching a delectible assortment of tea snacks with fanciful names like “The Haversack Special,” “Sabre Stew” and “Holiday Furlough.”

As breezily reincarnated by Pat Jordan of the American Historical Theatre in Philadelphia, Dix recounted her tempestuous childhood when she ran off from home fleeing a drunken abusive father, becoming a teacher at age 14 and later a social reformer responsible for the building of mental hospitals throughout the country. 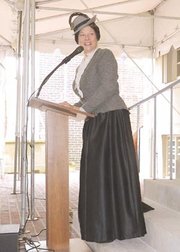 Dorothea Dix was brought to life by Pat Jordan of the American Historical Theatre.

Come the Civil War, she was recruited superintendent of female nurses serving the Union Army, and overcame resistance to ladies serving in hospitals with such fierceness, and wrote such blistering reports citing unclean conditions and doctors drunk on medicinal alcohol, she was nicknamed “Dragon” Dix.

Her nurses too she ruled with an iron hand, discouraging romance by hiring only “plain women” between the ages of 35 and 50 who wore drab unhooped skirts and no cosmetics or jewelry.

Many times she visited Carlyle House which had been commandeered from its Rebel owner, James Green, in November, 1861. One nurse at “Mansion House Hospital” as it was known — Anne Reading — dared to fall in love with and marry a patient, Andrew Furry. She wrote in her dairy that Dix "appears to be greatly offended because I had not previously made her acquainted with my intentions" and decided to leave, saying, "I do not think I shall be comfortable here any longer."