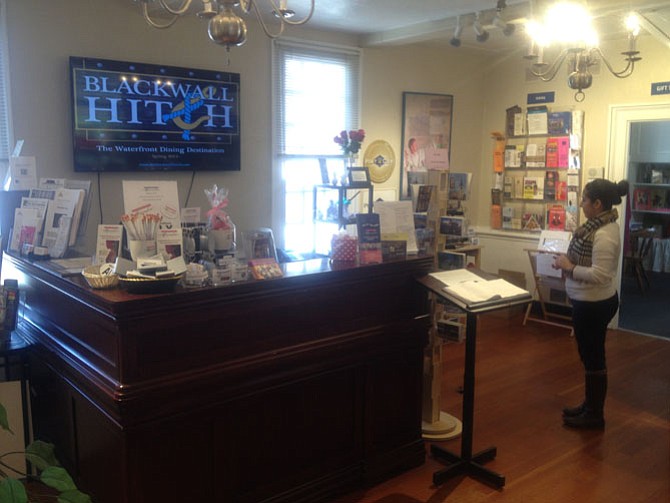 The Visitor Center at 221 King St. in Alexandria’s Old Town has brochures, maps, and tickets to a variety of tours and attractions. Staff is ready to help visitors find local favorites and ongoing events. Visitors can get a look at the stories that inspired “Mercy Street” at Alexandria’s historic sites, with more than two dozen new exhibits, events and tours. Photo by Ryan Dunn.

The Office of Historic Alexandria has joined Extraordinary Alexandria to celebrate the spotlight on its heritage and present new visitor experiences for fans of the PBS miniseries, “Mercy Street.”

Lauren Gleason, museum site manager at the Stabler-Leadbeater Apothecary notes that the site has herbs mentioned in the PBS miniseries “Mercy Street.” From January to May, the apothecary features the purchases and stories of the Green Family and the Union Quartermaster. 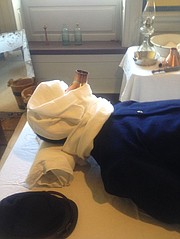 The Carlyle House, owned by the Green family, was housing for the doctors, surgeons and VIP guests and patients. The Carlyle House in Alexandria is open for tours and features an exhibit on the Mansion House Hospital. 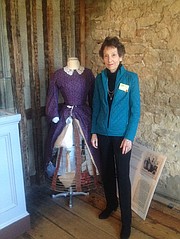 Set in 1862, Mercy Street follows the lives of two nurses, Mary Phinney (Mary Elizabeth Winstead) a New England abolitionist and Emma Green (Hannah James) a Confederate volunteer nurse. The two collide at Mansion House Hospital, the Green family’s hotel that has been taken over as a Union Army Hospital in Alexandria. The miniseries “Mercy Street,” counts Ridley Scott and “E.R.” writer David Zabel among its executive producers. It is a medical soap opera,“Grey’s Anatomy” and “M*ASH” set in the 1860s.

Alexandria was a border town between North and South and the longest Union-occupied city of the Civil War. Visitors can get a look at the stories that inspired Mercy Street at Alexandria’s historic sites, with more than two dozen new exhibits, events and tours. Visitor experiences uncover the people behind the characters on the show, Civil War medicine, changing roles for women, and the experience of African Americans claiming freedom.

“I’ve watched every episode as I have an interest in the series, and I think the episodes are historically accurate,” said Vanessa Herndon, education and outreach assistant at Carlyle House Historic Park.

The Lyceum at 201 S. Washington St., has an exhibit on the life of Clarissa Jones, a nurse at The Lyceum hospital during the Civil War. It will share with visitors the story of a nurse in Alexandria during the war, drawing parallels with characters portrayed in the PBS drama “Mercy Street.” It will include references to the experiences of other Alexandria nurses, such as Anne Reading, who worked in the Mansion House hospital, and Jane Woolsey, who served at the Fairfax Seminary hospital.

“It is a bit early to tell if the series Mercy Street has been an impact on our number of visitors. We have sold out recent lectures, and we are hopeful it will bring our more tourists and day tippers,” said Gretchen Bulova, deputy director of the Office of Historic Alexandria. In winter, there are often less visitors to museums than in other seasons.

"During the winter, when visitation is typically lowest, we are fortunate to have the marketing hook of a television drama like Mercy Street to drive attendance and media stories about Alexandria as an historic destination. We expect Mercy Street-inspired visitation to continue into the spring," said Patricia Washington, President & CEO of Visit Alexandria.

Gadsby’s Tavern Museum located at 134 N. Royal St. was a hotel during the Civil War and served as the quarters for Francis Pierpont, governor of the Restored Government of Virginia. The Gadsby’s Tavern ballroom now hosts many dancing events and tours. Advertisements in the Alexandria Gazette in 1862 promoted City Hotel, part of the Gadsby’s Tavern complex, as an ideal hotel location for visitors.

“Mercy Street” characters Mary Phinney, a nurse, and Dorothea Dix, the superintendent of Union Army nurses, are based on women at Mansion House Hospital. The hotel and hospital was once a larger building, stretching across the front lawn of the Carlyle House, blocking the home from street view. The Carlyle House, owned by the Green family, was housing for the doctors, surgeons and VIP guests and patients. Today, the Carlyle House is open for tours and features an exhibit on the Mansion House Hospital.

“From what I’ve seen, the series seems to be pretty accurate,” said Sylvia Winterling, a resident of Alexandria and museum supervisor at the Carlyle House.

"Visitors love seeing a drama and being able to visit the real places depicted in the show. The Civil War is a topic of endless fascination for people. In Alexandria, longest occupied area during the war; visitors can discover the people and places that made history," said Audrey Davis, Director of the Alexandria Black History Museum at 902 Wythe Street and Mercy Street Consultant on African American story lines.

“I think ‘Mercy Street’ conveys people who are together for a common purpose under stressful condition, in this case war,” said Carlyle House docent Linda Greenberg. Greenberg has volunteered at the Carlyle House for 12 years, and like many museum staff and volunteers, is a resident of Alexandria. Tickets are available for a presentation on the roles and responsibilities of Civil War Nurses on Tuesday, March 29 at the Lyceum.

The Stabler-Leadbeater Apothecary at 107 S Fairfax St. remained open and operational when Alexandria was occupied during the Civil War. The Green Family and Union hospital staff shopped here to purchase everything from laudanum to cologne. Lauren Gleason, museum site manager at the apothecary notes that the site has a container of pennyroyal, an herb mentioned in episode 3 of “Mercy Street.” From January to May, the "Green Family Exhibit" features the purchases and stories of the Green Family and the Union Quartermaster.

Alexandria’s Civil War heritage gives visitors the chance to see a Union fort, Confederate memorial, and museums dedicated to African American history. Additional sites which can be visited in Alexandria include the Alexandria Archaeology Museum, Freedmen Cemetery, Fort Ward Museum, and Alexandria Black History Museum. The best way to unlock Alexandria's history is with the city's premiere museum pass, granting visitors access into nine historic sites. Purchase the Alexandria Key to the City at the Alexandria Visitors Center at 221 King St. or online.