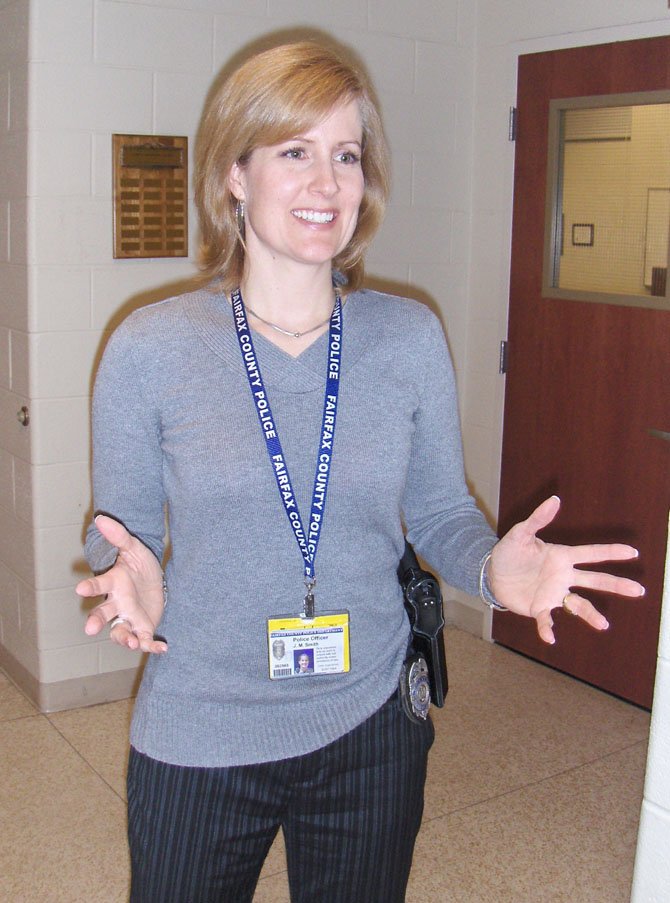 Help for Victims Of Domestic Violence

DVAC, the Domestic Violence Action Center, offering services to help victims who don’t want to involve the police. Contact this organization via the Office for Women & Domestic and Sexual Violence Services at 703-324-5730.

“I wanted her to educate people about involving the police department or other domestic resources, when necessary,” said Dawson. “I’m just trying to protect that next person from getting hurt, maimed or killed.”

Smith’s served 18 years as an officer with Fairfax County, 5 and a half as a domestic-violence detective. She’s currently assigned to the Sully District Station.

There’s one such detective at each district station. Couples often fight over money and, said Smith, “With the economy being so bad, domestic-violence calls have increased, the last several years.”

Legally, domestic violence is defined as an assault and battery against a spouse, former spouse, sibling, parent, step-parent, child in common, grandparent, boyfriend or girlfriend who currently live together or have done so within the last year. In-laws who live with the abuser are also included in this definition.

When a person feels in danger of physical abuse, he or she may pursue a protective order to keep away the person threatening him or her. And there are three different kinds of orders:

“The last two come with certain conditions for protection,” said Smith. “For example, no further acts of family abuse; no contact with the victim or their children or other family members; or mental-health and/or substance-abuse treatment for the abuser.”

“Domestic-violence detectives do follow-up with the victim to get further evidence for court, such as photos of injuries,” said Smith. “They’ll also obtain the 911 call and any jail calls — for example, the offender calling someone and making admissions or threats or contacting the victim during the duration of the protective order.”

She said detectives like her explain the court process to the victim, go to court where they can and, basically, assist both the victim and the arresting officers. Often, however, victims don’t want their abusers to go to jail.

“About 50 percent of victims minimize or deny what’s happened,” said Smith. “That’s a big challenge for the officers, so we try to build the case without the victims’ cooperation. We see if the abuser has a [criminal] record, if there were witnesses to the abuse, the severity of the injuries and any evidence of the incident.”

Domestic violence is a Class 1 misdemeanor, punishable by as much as a year in jail and/or a $2,500 fine. But in the case of a first offender — and if the victim’s injuries aren’t too severe — the abuser may receive a deferred disposition in court. The abuser must also agree to take an 18-week abuse-prevention class and will be on probation for two years. If the offender is of good behavior during that time, the case is dismissed.

Stalking, also a Class I misdemeanor, is a troubling behavior, as well, said Smith. “Ninety percent of them involve an intimate partner — an ex or a current one — putting the victim in fear of death, criminal sexual assault or bodily injury. Stalking could involve assault, abduction, burglary, trespassing, threatening to harm a pet, computer trespass, unwanted contact with the victim’s family and friends, making false allegations, or showing up at the victim’s work or church.”

She said stalkers often use technology, such as phones, cameras, GPS, computers, spyware and social-networking sites, to keep tabs on their victims. But, she added, “These things also help police track their activities.”

According to Smith, 81 percent of stalking victims who were stalked by a current or former intimate partner report they were also physically abused by them. She said 73 percent of intimate partners verbally threatened their victims with physical abuse, as well.

“Domestic violence is a power and control issue,” said the detective. “If a woman breaks up with her boyfriend, he no longer has control over her.” So, said Smith, he may start stalking her to try to retain that power. But that’s extremely dangerous, she said, because “physical abuse plus stalking equals a higher indicator of lethality [something capable of causing death] than either behavior, alone.”

“Most domestic violence goes on behind closed doors, so get to know your neighbors,” Smith advised her audience. “If you hear escalating arguments, things being thrown or see an unfamiliar car parked in your neighborhood, you can call the police. Every life is precious, and we want to help anybody who’s in a domestic-violence circumstance.”

“If a friend or co-worker has a hard time explaining their injuries, encourage them to get a protective order or call the Office for Women & Domestic and Sexual Violence Services hotline, 703-360-7273,” she continued. “Or they can contact other organizations.”

“It’s OK to have an argument, as long as it doesn’t become physical,” said Smith. “Everyone should feel safe in their own home.”