Rachel and Kelsi Okun are presented with Jefferson Award for Public Service. 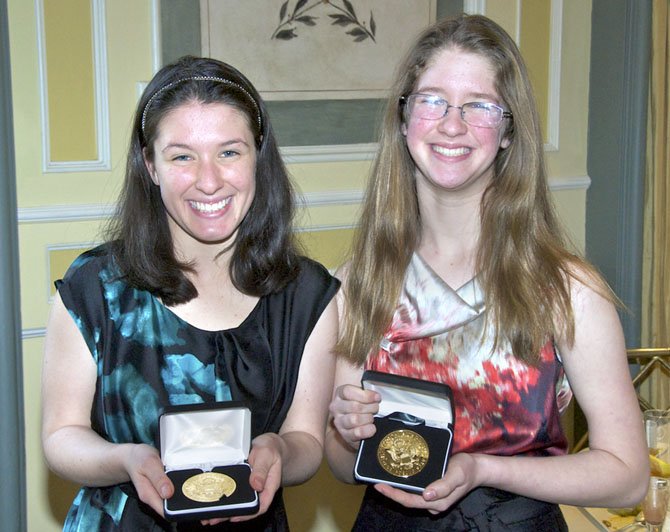 McLean sisters Rachel, 16, and Kelsi Okun, 13, love treasure hunts. They became enamored with them during a family vacation in 2005, and have loved them ever since. And it was their love of treasure hunts and history that led to the creation of ThanksUSA, a charitable organization that raises money for need-based educational scholarships for children and spouses of military members.

Last week, Rachel and Kelsi were honored at a national awards ceremony in New York, where they received the Jefferson Award, often referred to as the Nobel Prize for public service. The girls took the day off of school, caught a shuttle to New York with family members, and accepted the award for founding and helping to run the organization which in six years has raised $7.5 million and awarded 2,500 need-based scholarships to military family members. They received an Outstanding Service Award for a Globechanger under the age of 25.

THE GIRLS were excited about winning the award, and they both were thrilled about what it might mean for the charity. "To be selected is such an honor," said Rachel, a sophomore at National Cathedral School. "And I think it really just pays appropriate tribute to all the people who have worked so hard in this organization."

"It’s not really reality yet," added Kelsi, an eighth grader at Longfellow Middle School. "I don’t think that it ever will be. It’s such a huge step for the charity, not even for us. For the charity to be recognized, hopefully that will help it go even further and gain new awareness and help it flourish even more."

The girls recounted the period after that 2005 vacation, when they sat at the dinner table with their parents and considered how they might raise money through treasure hunts. They wanted to donate any money they raised to a worthy cause. They didn’t have to look far to settle on one.

Their friend and neighbor, Lanier Ward (then a Lieutenant Colonel in the U.S. Army), had returned from Iraq seriously injured. "I think that was life-changing for us," said Kelsi. She told of painfully watching Ward struggle to pick up his young daughter. "All our lives we’ve been told that education is the greatest gift you can be given," added Rachel. "I think it was looking at Lanier’s family and realizing that horrible paradox. When you’re in the military, the income that you’re receiving was not going to be enough to give his daughter the education that she deserved. So we thought if there’s one way for us to make sure that she gets to have anything she wants when she grows up, it would be to give her the gift of education in the form of a college scholarship."

Thus, ThanksUSA was born, and with the help of parents, pro-bono legal and public relations assistance, and many others, the idea took off. "It was awesome because when we came back from vacation, when we were sort of thinking about this idea, we ran across that field to tell my third grade teacher about it," said Rachel, pointing to the field adjacent to Franklin Sherman Elementary. Rachel’s teacher was Carolyn Ferek, still a teacher at Franklin Sherman, and in fact, one of the many volunteers who help the girls with the venture. Today Ferek is on the board of ThanksUSA.

ThanksUSA invites visitors to play a ten to fifteen chapter treasure hunt game on its website. The hunt often includes games such as crosswords, hidden messages, or word games. Visitors draw on their knowledge of history and network with friends and family to complete each chapter. Those who complete the chapters are entered into a drawing for a prize. And those who complete the entire treasure hunt are entered into a drawing for a grand prize. Former prize winners are often involved in helping to create new treasure hunts. Though the treasure hunt is advertised as being appropriate for ages nine to ninety-eight, the games are plenty challenging. Working with friends and family is encouraged.

THE GAME is free, but the hope is that visitors to the website will contribute to the organization, become involved in a fundraiser, or just be made aware of the mission. The website address is www.thanksusa.org.

Rachel and Kelsi’s mother, Deanna Okun, said that this venture has changed their family’s lives. "Kids have a lot of great ideas, and many of them you cannot pursue, or they are not practical," she said. But "when this came up, it happened to be at a time when we said we should do more, and this might be a time to try this. And I think it’s important instilling or setting up a lifetime of thinking about giving."

Meanwhile, the girls are balancing the day to day challenges of being students and continuing to find ways to raise money for military family scholarships. It’s not unusual for them to participate in conference calls in the car or discuss fundraisers at dinner. But they both say they don’t mind the work. "It’s not even a sacrifice," said Kelsi. "You just get so happy once you meet a scholarship recipient who was touched by the award. They always thank us in their letters. But really, we’re the ones who are thanking them. They do so much for us. It’s really, really the least we can do."