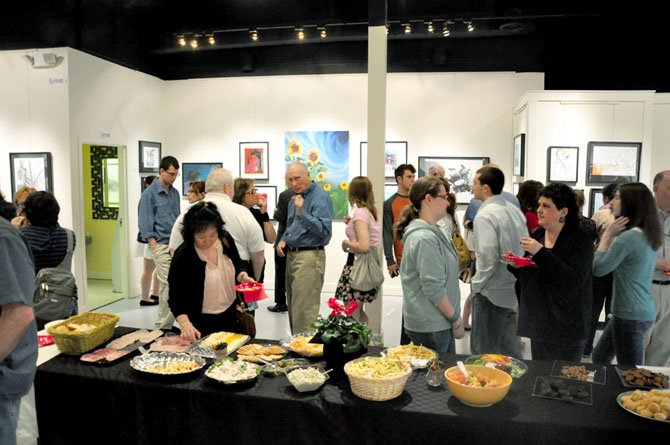 Herndon — Last Fall, Herndon High School senior Baback Chiniforoushan was with some friends and his dog next to the Washington Monument when they performed a familiar ritual.

"My dog loves to get piggyback rides, and we were right next to the Monument, so I figured I’d pick him up for a quick ride," he said. 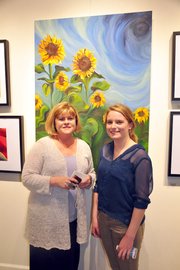 From left, Herndon High School art teacher Kathleen Adams and senior Nicole Lee, next to Lee’s oil painting "Sun Bath." Lee was one of many student artists who contributed to the second annual senior art show at Herndon ArtSpace.

"I’m sort of nervous seeing my photo up there, I’ve never had one shown before," Chiniforoushan said. "But I’ve been interested in photography for a while, and now I’m looking at possibly studying it in the future, so hopefully it will build from here."

This is the second year ArtSpace has hosted the Herndon seniors, and President Robin Carroll said they were pleased to be able to continue the tradition.

"it is such an honor to work with such exceptional young artists," said Studio Art teacher Kathleen Adams. "We’ve had an amazing year, as you can tell by the exhibit here just how hard they worked."

Wayne Zink, head of the Art Department at Herndon High thanked the students, saying they don’t have to take art, but "because you do, we have fun jobs."

Students were equally complimentary of the school’s art faculty.

"Our teachers are really committed to what they do, and I realized that they’re so supportive, it’s what I would imagine a private school would feel like," said senior Kat Zobeck, who had two pieces in the show.

The exhibition will run until March 25. ArtSpace is located at 750 Center Street, and can be found online at www.artspaceherndon.org.