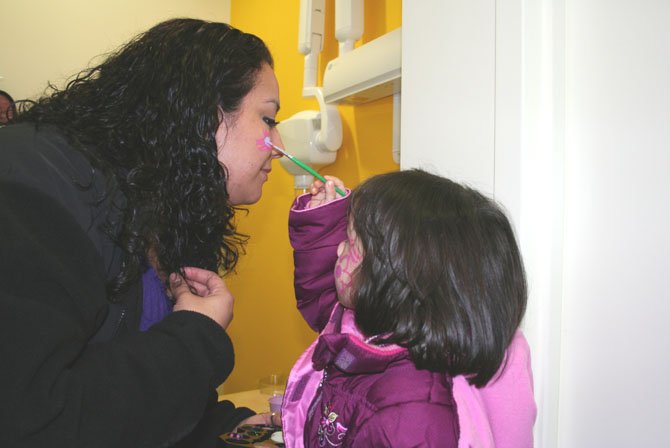 Alaris Bentley, 9, played the role of dentist and leaned the dentist’s chair back to examine Dr. Angela Austin’s teeth at Alexandria Children’s Dentistry.

Austin hosted a party at her office on Little River Turnpike Feb. 24 to conclude Children’s Dental Health Month where children could play dentist, meet the tooth fairy and have their face painted while enjoying healthy snacks and becoming more comfortable visiting the dentist.

William Gilbert was initially worried about his daughters Gabrielle’s, 5, and Brianna’s, 3, first visit to the dentist three months ago, but found that the office’s child-friendly design, made them so comfortable they ask when they will go back.

From a play area in the waiting room with an entry way just small enough for children to enter, to the stuffed animals placed in shelves in the open examination rooms, Austin, who started her practice in October, designed several areas with children in mind. But Gilbert especially likes one examination room set up with a TV that a child can watch during a procedure.

“I love the way they have it set up — it’s for the kids. They have videos [the children] can watch while they’re doing the actual procedures,” Gilbert said.

A tooth fairy greeted children as they entered the office when she was not reading to Dominic, 6, and other children about how Sister Bear’s tooth was removed in “The Berenstain Bears Visit the Dentist.”

Austin opened the office especially for Dominic to treat what his pediatrician thought was a tooth abscess.

“It makes me feel like that’s a dentist who really cares about her patients, especially since he wasn’t a patient at the time,” Dominic’s mother Maureen Orsini said.

Austin recommends that parents bring their children to the dentist as early as age one. “If a child sees a dentist by age one, then he or she will have happy visits to dentists in the future.”

Isabelle, 2, helped paint a flower on her mother Ariana Lara’s face while she sat in a dentist’s chair in a corner further away from the main events. Lara heard about the party when she brought her daughter Isabelle, 2, in for a cleaning the day before. “[The staff] really knows how to deal with kids on their level. Their tone of voice is very welcoming for the children.”

Austin also spoke at PTA meetings, in classrooms, and at the Ellen Coolidge Burke Branch Library throughout February to educate and motivate Alexandria children to take care of their teeth.

“It’s so important… to see that she’s planting the seeds so early,” Austin’s mother Rosemary Austin, who assisted with the party, said. “They’ll remember this [experience] literally all their life.”

Sharif Abdrabbo was so happy with the experience his three children had at Austin’s office that he and his neighbor Ravi Ramani encouraged their Cameron Station neighbors to come to the party.

“We tried to tell our neighbors and drag them along so that they could meet Dr. Angela and see what the office was like,” Abdrabbo said.

Austin has a long history of community service — as a National Health Service Corps Scholar, she spent two years practicing in a dentally underserved community and completed an externship providing medical care at an orphanage in Honduras during her residency.