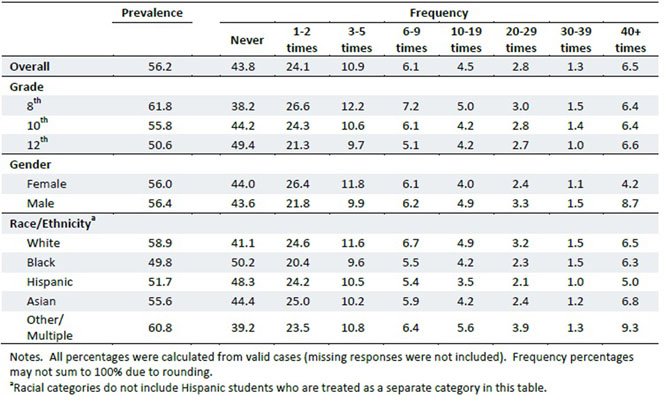 The 2010 Fairfax County Youth Survey table on the prevalence and frequency of students being bullied, taunted, ridiculed or teased by someone in the past year. Numbers are percentages.

Fairfax County — Monitoring aggressive behavior is a primary concern of Fairfax County when conducting the annual Youth Survey. While fewer than 5 percent of students report gang activity or carrying a weapon, a majority of students have experienced bullying from one side or the other.

According to the survey, 49.4 percent of students reported "bullying, taunting, ridiculing or teasing" someone in the past year. More than 8 percent said they did so 20 or more times.

THE SURVEY also shows that 56.2 percent of students reported being bullied, taunted, ridiculed or teased in the past year, and more than 10 percent more than 20 times.

"We’ve seen that over 40 percent of the students who say they have been bullied have themselves bullied someone," said Mary Ann Panarelli, director of Fairfax County Public School’s Intervention and Prevention Services department. "So we’re not talking about a clear-cut case of ‘good guy-bad guy.’ It’s not a matter of punishing it out of the system, it’s a matter of enacting a culture change."

Since the question is phrased to include "teasing," which isn’t regarded as seriously as bullying, the county focuses more on the victims and perpetrators involved in more than 20 incidents per year.

The county currently conducts a variety of awareness programs, and is working on a system-wide bullying intervention and prevention group. Panarelli says much of the outreach is dedicated to the bystander, the person witnessing someone being bullied.

"We’ve found in talking to students that in the moment, there really isn’t a comfortable way to identify what is happening, and try and stop it," Panarelli said. "But things like going up to the victim after, saying ‘I saw what happened, and don’t agree with it’ helps that victim from feeling isolated."

With the emergence of social media, bullying hasn’t been limited to school hours. With access to fellow students’ profiles and information online, bullying can happen online too. Cyberbullying is defined by the survey as "bullying through email, chat rooms, instant messaging, websites or text messaging."

While cyber bullying most often stems from interactions at school, Fairfax County Public Schools has a limited authority over what happens off school grounds. But when it becomes harassment or worse, that’s where the Fairfax County Police become involved.

"It used to be you only had to worry about this happening at school, but now it follows people home on their computers," said Capt. Bruce Ferguson, commander of the county’s Community Resources Division. "While we’re a little behind, we’re working hard to get our officers trained on identifying who is being bullied, and to find out if there are any criminal aspects to it."

UNDER VIRGINIA LAW, intent to coerce, intimidate or harass someone using a computer network to communicate obscene, vulgar or indecent language or threaten any immoral or illegal act may be a Class One misdemeanor.

Ferguson said training and prevention are key if the county wants to prevent a tragedy such as the recent one at Chardon High School in Ohio, or Columbine.

"We can’t be scouring everyone’s Facebook page to see what’s happening, we need the kids who are going through this to come to us," Ferguson said. "Any enforcement is simply trying to put someone on notice, we’re not concerned with punishment as much as we are with changing the destructive behavior."

More than 70 percent of students said they would report cyber bullying incidents if it could be done anonymously.