Farmland could be turned over for soccer fields in August. 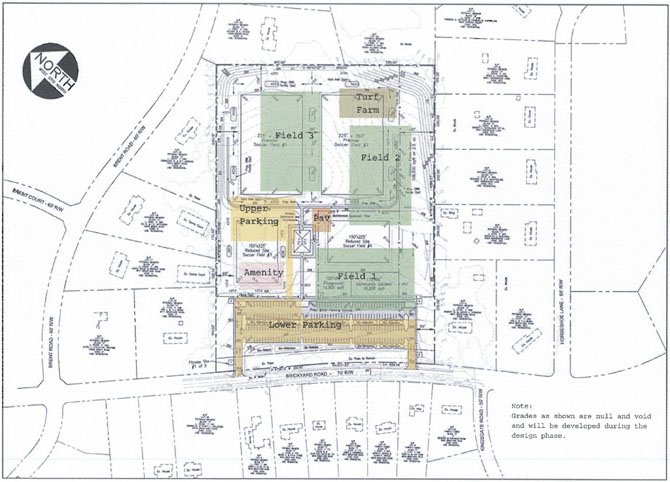 Potomac — Montgomery County Executive Isiah Leggett officially awarded 20-acres of farmland on Brickyard Road to Montgomery Soccer, Inc. to develop into four soccer fields. MSI will develop the fields under a sublease from the County.

This is exactly what Leggett has said he will do for more than a year. In March 2011, neighbors and civic organizations in Potomac learned that Leggett had already decided, without public input or notice, to take control of the 20-acre school property on Brickyard Road to turn it over for development into soccer fields.

The action will displace Nick Maravell, a nationally recognized expert in organic farming, who has spent the last 30 years growing organic and GMO-free soybean and corn seeds on the property.

The County subleased 20-acres of farmland on Brickyard Road to MSI for the development of four soccer fields and parking.

Objections to the proposed sublease must be submitted in writing by Friday, April 13, at 5 p.m.

The nine-year lease of the land from the county to MSI begins on Aug. 16, 2012 and expires in April 2021, according to County documents. The County leased the land, technically a future school site, from the Board of Education on April 19, 2011, for use as soccer fields, parking lots and other amenities.

Last January, the county issued a Request for Qualifications and Development Proposals for the development, construction, maintenance and operation of soccer fields. But the County says it received only one “qualified response” to the RFP, according to last Friday’s notice and the selection committee concluded its proposal review and negotiations with MSI for the development of fields.

“The Brickyard deal was a political fix from the beginning,” said Keith Williams, president of Civic Association of River Falls and a member of the Brickyard Coalition. “We will continue our legal and public efforts to provide an open and transparent process for the best use of the Brickyard property.”

MSI will pay an annual fee of $1,500 to lease the property and will be responsible for the design, construction, operation and maintenance of the soccer fields.

The cost to develop the land into soccer fields is at least $1.6 million, according to county documents.

The public must send any objections to the proposed sublease by Friday, April 13 at 5 p.m.

“Standard operating procedure is that we don’t comment during this period,” said Patrick Lacefield, director of the Montgomery County Office of Public Information.

The public has been objecting for more than a year about being kept in the dark about plans for the property and about the lack of public process on alternatives for the land. Local farm and organic food advocates have decried the loss of an irreplaceable resource for growing heirloom seed. Others cited the loss of an opportunity to use the operating organic farm for education for school children.

Meanwhile, The Brickyard Coalition filed a Maryland Public Information lawsuit in Montgomery County Circuit Court last Wednesday, March 21, 2012. The Coalition seeks under the Freedom of Information Act to compel Leggett and David Dise, director of the Department of General Services, to provide all public records relating to the Brickyard site.

And in other action Tuesday, March 27 after the Almanac presstime, the County Council continued a public hearing on emergency legislation introduced March 13 that would allow the Council to approve any sale or lease of County property before it becomes final.

“The purpose of this requirement is to avoid a situation where [a County] Executive gains approval to dispose of a property and then modifies the term in a way that … might not be in the County’s best interest,” according to Michael Faden, the Council’s senior legislative attorney.

Also in March, the Brickyard Coalition — with more than 400 individual and civic organization members— filed legal notice with the Montgomery State Treasurer of a possible $40 million monetary claim against the Montgomery County Board of Education for leasing the Brickyard Road property to the county. The notice is required if citizens want to sue and seek monetary damages from the school board or any officials.

These actions were filed near the one-year anniversary of the Board of Education’s vote on March 8, 2011 to lease the 20-acre property to Montgomery County.

“Specifically, Bill 11-12 would modify County Code by: tightening up the current property disposition process (which includes an opportunity for Council comments but not approval) so as to preclude the broad exemptions found in current County regulations.”

Currently, Council legal staff and the County Attorney disagree over the Council’s ability to approve terms of land disposition, according to council documents.

According to the County Attorney, the expedited bill violates the County Charter by “authorizing the County Council to unilaterally veto a disposition of property.”

“Although we conclude that Bill 11-12 violates the separation of powers mandated by the County Charter, we do not mean to imply that the Council is without the authority to exert control over how the Executive effects a disposition of County-owned property,” according to the County Attorney.

The bill, sponsored by six of the nine members of County Council, including Council President Roger Berliner, who represents Potomac, along with George Leventhal, Marc Elrich, Phil Andrews, Hans Riemer and Nancy Navarro, would take effect on the very day it becomes law. Leventhal, Riemer and Elrich are three of the four at-large members of Council, and so also represent Potomac.

“The Council declares that this legislation is necessary for the immediate protection of the public interest,” according to the bill.

The Brickyard Coalition formed in response to the surprise notice in March 2011 that the Board of Education would terminate the lease of organic farmer Nick Maravell in order to lease the Brickyard site to the county for private soccer fields. The public learned of the action just days before the vote.

But the County Executive had already decided to turn the land over to a private soccer organization and county officials had been discussing the proposal with Montgomery Soccer Inc. and school officials for at least two years without any public notice or engagement.

The Brickyard Coalition is an umbrella organization of civic groups and residents and includes the West Montgomery County Citizens Association, the Civic Association of River Falls, and the Brickyard Road Citizens’ Association.

The Brickyard Coalition filed requests for documents, including email correspondence between county and school officials, under the Freedom of Information Act, and learned that the County Executive had been planning for years to deliver the 20 acres of public land to a private corporation for development into soccer fields.

“If this is permitted to happen, it will set a terrible precedent and no community within Montgomery County will be safe from such schemes, secret planning and private developments on public land,” said Curt Uhre of the Brickyard Coalition.