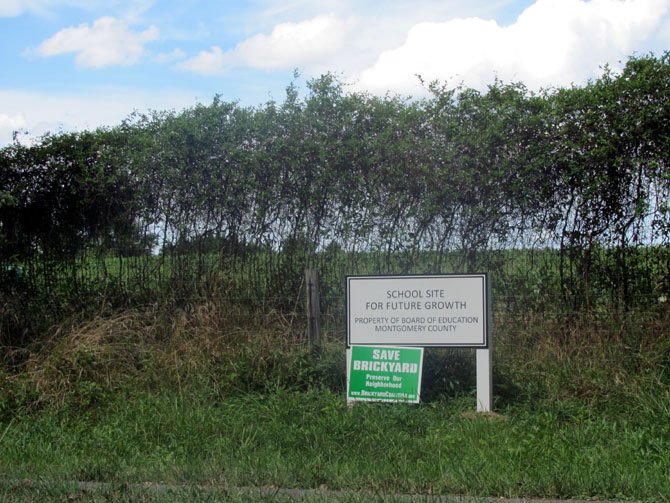 The new sign in front of the Brickyard Road farm site. Photo by Mary Kimm.

Potomac — Like a parent, Circuit Court Judge Ronald B. Rubin intervened. “Don’t delete it, don’t destroy it. We will fight about it … but please do it,” said Judge Rubin.

“County, please try to get this done, please,” he said.

Tuesday, July 10, Judge Rubin rejected the county’s motion to have the legal complaint filed by the Brickyard Coalition dismissed.

Instead, Judge Rubin compelled the county’s information technology experts to work directly with computer technology experts from the Brickyard Coalition to search for documents regarding the sublease of 20 acres of farmland to MSI for conversion into soccer fields.

“I want to do this one time, and do it as cost effectively as possible,” Judge Rubin said.

The judge scheduled another hearing for Aug. 14 in Montgomery County Circuit Court.

THE BRICKYARD COALITION and West Montgomery County Citizens Association filed a Freedom of Information lawsuit in Montgomery County Circuit Court last November, claiming that the county violated the public’s right to have access to information about the government’s affairs concerning the conversion of Brickyard Road farm site into soccer fields.

The nine-year lease of the land from the county to MSI is set to begin on Aug. 16, 2012 and expires in April 2021, according to county documents. The county leased the land, technically a future school site, from the Board of Education on April 19, 2011, to turn over to a private organization for soccer fields, parking lots and other amenities.

Earlier this spring, Montgomery County Executive Isiah Leggett officially awarded 20-acres of farmland on Brickyard Road, owned by the Board of Education, to Montgomery Soccer, Inc. to develop up to four soccer fields.

MSI would develop the fields for use by its members under the sublease from the county.

In March 2011, neighbors and civic organizations in Potomac learned that Leggett had already decided, without public input or notice, to take control of the 20-acre school property on Brickyard Road to turn it over for development into soccer fields.

The action would displace Nick Maravell, a nationally recognized expert in organic farming, who has spent the last 30 years growing organic and GMO-free soybean and corn seeds on the property.

“We’re worried that people are getting the idea that it’s over,” said Ginny Barnes, of West Montgomery County Citizens Association.

“What laws have been broken? What regulations have been violated?” said Curt Uhre of the Brickyard Coalition. “That’s coming soon.”

Judge Rubin also warned the attorney for the Brickyard Coalition.

“What you’re asking for is not free or cheap,” he said. “Folks, please try to spend as little of the public’s money, please.”