Chargers get victories over Westfield and Mount Vernon. 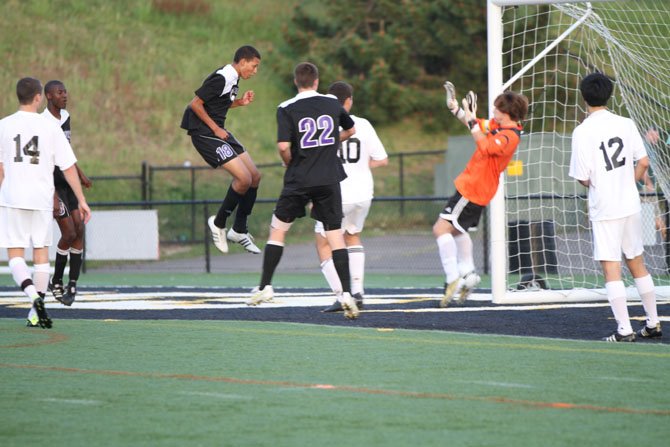 Chantilly sophomore Nick Ullom, in the air, scores on a header shot to give the Chargers an early 1-0 lead over Westfield. Chantilly, in the Concorde District game played on April 26 at Westfield, went on to win 4-0. No. 22 for Chantilly is senior midfielder Anton LeKang. Courtesy Photo/Chantilly Soccer

Chantilly — The Chantilly High boys’ soccer team, following a 0-8 start to the season, won consecutive games last week. The Chargers, in a Concorde District outing at Westfield High last Thursday, April 26, defeated the Bulldogs, 4-0, for their first win of the season. And earlier this week on Monday, April 30, Chantilly, in overtime, won a non-district home game over Mount Vernon, 4-3.

Chantilly (2-8-1) is not scheduled to play again until Monday, May 7 when it meets visiting district rival Centreville for a 7 p.m. contest.

In last Thursday’s win over Westfield, Chantilly scored two first half goals to take a 2-0 lead into the intermission. The first Chargers’ score came from Nick Ullom, who found the net on a header shot, off an assist from Irvin Perez, five minutes into the contest.

Chantilly scored again, with 23 minutes remaining in the half, on a goal by Billy Germain, who dribbled past a few Bulldogs and ripped a shot into the left lower corner. Assists on the score were credited to Dusty Peltola and Mannaan Umar.

Chantilly also found the net twice in the second half.

Umar, with 22 minutes left in the second half, scored his first goal of the season, shooting a high ball over the keeper and just under the cross bar, to make it 3-0. Ullom got the assist on that score.

Chantilly’s final goal came on a Ben Fedenisn score, off a Germain assist, with 14 minutes left. On the scoring sequence, Germain dribbled the ball down the right side, turned the corner, and crossed the

ball to the feet of Fedenisn, who put it away for his first goal.

Great goal keeping in the win came from Chargers’ netminder Mitchell Lagos, who came up with some big saves throughout the contest as the Bulldogs tried to get onto the scoreboard.

ON MONDAY, in the win over Mount Vernon earlier this week, Chantilly opened the game’s scoring five minutes into the start of play on an Evan Ragland head shot, off a corner kick assist from Bruno Zambrana.

Mount Vernon, however, scored two goals late in the first half and the Majors held a 2-1 halftime lead.

Mount Vernon scored again to take a 3-1 lead about nine minutes into the second half – a score by Simond Kargbo. But the Chargers continued to work for chances and hit pay dirt with 28 minutes, 35 minutes left in the half when Umar, after a long shot by teammate Anton Lekang was blocked by a Mount Vernon player, was there to put the ball into the back of the net to get the Chargers within 3-2.

Later, with just less than 14 minutes remaining in regulation, Zambrana passed the ball up to Fedenisn, who went on to score the game-tying goal for a 3-3 score.

The game ultimately went into overtime play with two, five minute sessions. Incredibly, both teams, Chantilly and then Mount Vernon, had goals called back – the Chargers’ score being negated by a penalty call, and the Majors’ goal being nullified by an offsides call.

But Chantilly, with less than two minutes left, got the goal that counted and proved to be the game-winner when Germain, off a beautiful pass across the goal area by Umar, put the ball away for the score.

Lagos earned the win in net for the Chargers.

The loss was the first of the season for Mount Vernon (8-1-2), which competes within the National District.