It’s a Race and a Picnic
Votes

It’s a Race and a Picnic

Clifton Caboose Twilight 5K is May 12 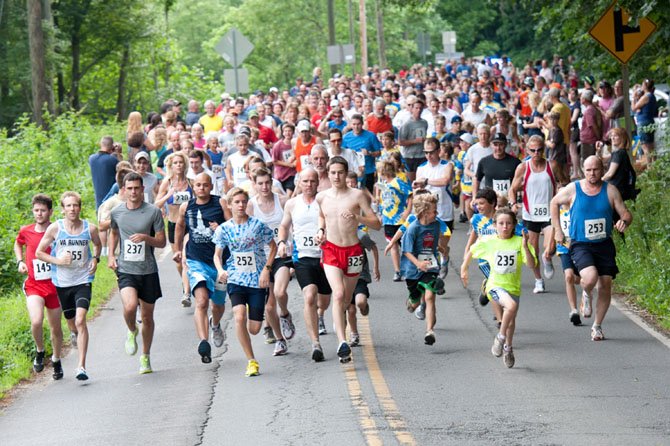 Anyone can hold a 5K race early in the morning, but the Town of Clifton does things differently. Its 15th annual Clifton Caboose Twilight Run is Saturday, May 12, with the 1-mile fun run/walk starting at 6 p.m., and the 5K, at 6:30 p.m.

It’ll happen rain or shine; and in this competition, not only the winners receive prizes, but the last-place, or caboose, finisher also gets an award.

The course begins near the triangle intersection of Clifton and Newman Roads and Main Street and is popular with participants because of its scenic, country atmosphere. The route goes straight out Newman Road and back again; it’s somewhat hilly and fairly challenging.

Last year’s event attracted 378 participants — 99 in the 1-mile and 279 in the 5K — and race Chairman Gary Anderson expects even more this time. "This year, we’ll have students from the running programs of two elementary schools, Fairview and Willow Springs," he said. "Both boys and girls, ages 8-10, will be in the 5K."

Packet pick-up is Friday, May 11, from 5-7 p.m., at the barn, or on race day, just prior to the event. Participants will also receive a commemorative, Clifton Caboose T-shirt designed by residents Bill and Sam Ferrence. "It’s a really nice design," said Anderson. "It’s simply train tracks on a moss-green shirt so people can wear it other places, too."

The race is sponsored by the Clifton Betterment Association (CBA), dedicated to improving the Town of Clifton. This year’s proceeds will go toward rewiring the town barn with electricity.

Parking is available at the end of Chapel Street, in the floodplain and at Clifton Elementary. Water will be provided along the course, and snacks such as fruit, cheese and rolls will be offered after the race. All children participating will receive Freeze Pops from The Clifton Store.

The Reston Runners Club manages the finish line and will record each runner’s time via computer. Gift certificates and medals go to the top three male and female finishers. Medals are also awarded to the top two finishers in each age group. The top two CBA-member finishers receive medals, and a caboose award goes to the person coming in last. In the fun run/walk, all finishers are given ribbons.

But the good times won’t end when the race is over, because everyone who attended may join the party afterward at the barn. Parents are encouraged to bring picnic suppers and beverages for children. The celebration also features music by a live band, the City-Dwelling Nature Seekers, which performs folk and rock music.

This year is Anderson’s eighth as race chairman, with help from town residents Michelle Stein and Steve Bittner. In January, they pick a race date and get onto local race calendars so runners may find and prepare for this event. In the spring, they alert businesses and residents along Newman Road that it’ll be closed to traffic during the race. Also lending support are the volunteers and CBA, plus resident Fred Ansick, who helps mark the course and gets the VDOT permit for the road closure.

"Nobody officially asks me to be chairman, so I don’t get an opportunity to say no," joked Anderson. "But it’s a fun event and I just want to see it continue. Plus, I get help from everybody."

The race attracts participants from places including Maryland and North Carolina. And many contact Anderson afterward and tell him how much they enjoyed visiting Clifton and being in the Caboose Run. "One man emailed me to say, ‘Who wants to get up early in the morning and run a race?’" said Anderson. "And the party afterward makes it for a lot of people."

This will be the first time the twilight race will be held in May, instead of June. "We moved it because of conflicts with other June events, such as the Wine Festival," said Anderson. "And I’m hopeful that, because it’s a little earlier, the weather this year will be on the cooler side."

Hoping as many people as possible register for the event, he said, "We raise more funds for the community when we have more participants. And we also have more fun — the more, the merrier."