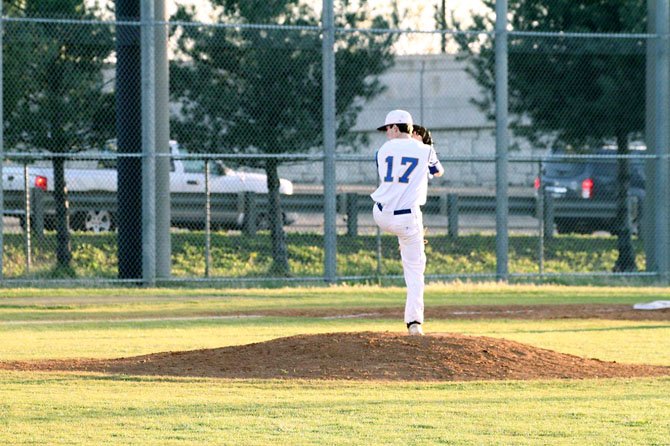 Lee High junior pitcher Will Smith has worked his way into the Lancers' starting rotation this season. Photo/Courtesy of Bob Atwell

The win was the fourth of the season for Lee (4-12) and first district triumph. The Lancers' other wins this spring have come over Edison High, Wakefield, and Brentsville District (Nokesville).

Smith, over seven innings against the Titans, allowed three hits, walked two, and struck out three.

Smith, on the mound, kept T.C. batters off balance much of the game.

"Will did an outstanding job of changing speeds and locations," said John Dowling, who is in his first year as the Lancers' head coach. "He was able to get in on the hands of righties with his fastball and keep the lefties off balance with his curveball, which is really improved from the beginning of the year."

Smith, a junior right-hander, had just the three strikeouts but often made the Titans hit his pitch, meaning he was pin-pointing his pitches well and hitting the corners. The Lancers' played a good game defensively as well.

"He pitched to contact and we played good defense behind him which was critical as we've been inconsistent defensively this year," said Dowling. "When we play solid defense and throw strikes we can compete in our district. The challenge now is to do that night in and night out against some very good teams. Will has thrown well for us all year. He pounds the zone and I think he's growing more confident each outing. He's a different player when he's pitching."

Smith was utilized out of the bullpen earlier in the season.

"We were primarily using him in a relief role but he has worked his way into the rotation with his last few outings," said Dowling.

Lee was scheduled to play district games this week at West Springfield on Tuesday, May 1 and home against Woodson this Friday night, May 4 at 6:30.