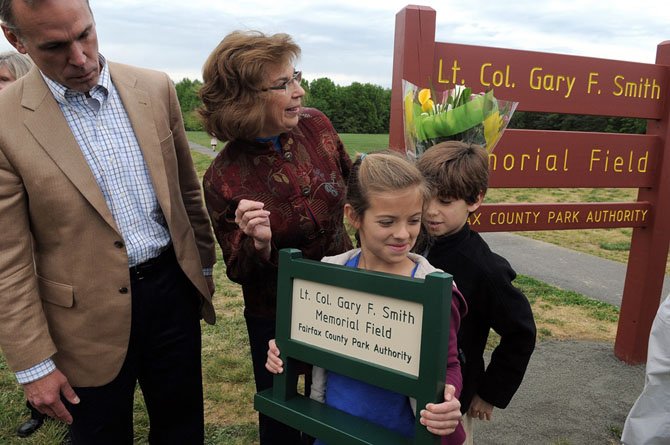 Friends and family gathered Saturday, April 28 at Field #5 at Grist Mill Park for the renaming of the field in honor of Lt. Colonel Gary F. Smith (ret.).

Smith started coaching soccer in 1980s when his girls expressed interest in the game. He bought a book on coaching the game and for over 12 seasons was out on the field.

While in active service in Vietnam, Smith was awarded a Soldier’s Medal for heroism: “A helicopter that he was riding in crashed and caught fire. He went back to the wreck, despite the intense heat and danger of explosion, he rescued a soldier trapped inside.”

Smith died at the Pentagon on Sept. 11, 2011. He was a civilian employee of the Army attending a meeting when American Airlines Flight 77 struck the building.

A fundraising effort is underway to make the soccer field a state-of-the-art synthetic turf field. The field will offer more playing time, a better surface and less maintenance than a regular turf field. Roberta Longworth of the Fairfax County Park Foundation is heading up the fundraising efforts for the new turf field. For more information visit www.FairfaxParkFoundation.org or call 703-324-8582.