‘Connecting the Dots’ on Climate Change 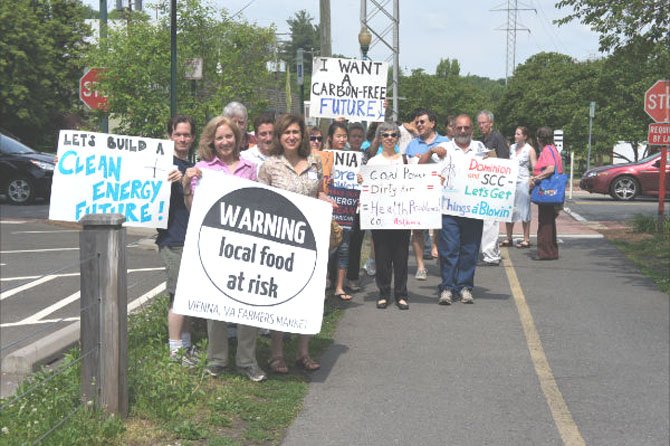 Del. David Bulova (D-37) was a member of the Virginia Commission on Climate Change and brought an in-depth look at the issues to the audience at the NOVACAN Climate Change Workshop.

The NOVACAN group tailored their Dot sign to the Farmer's Market where they gathered to encourage the public to demand local and state policy makers to address climate change issues.

The climate change activists take their case and their signs to the Vienna Farmer's Market. The group, with signs in hand, marched from the Patrick Henry Library on Maple Avenue to the Market via the W&OD Trail.

What could Los Cayes, Haiti; Lancaster, Texas; Geraldine, New Zealand; Alexandria, Egypt; London, England; Dumaguete, the Philippines, and Vienna, Va., all possibly have in common? They are all communities where on May 5 people came out to "Connect the Dots" between carbon emissions, insufficient emphasis on renewable energy, climate change, severe weather, and life-threatening risk to the planet and all its life forms. Involving concerned citizens in 188 countries, the Climate Change Day was the brainchild of 350.org, an organization dedicated to building a global grassroots movement to solve the climate crisis. Their name, 350.org, refers to their goal to reduce the CO2 in the atmosphere from its current number of approximately 392 parts per million to less than 350.

In Vienna, the action began in the Patrick Henry Library meeting room, sponsored by the Northern Virginia Climate Change Action Network (NOVACAN). NOVACAN is a coalition of local organizations that formed in 2009 to educate the public on the immediate and future effects of climate change in the area and to address climate change policy at the federal, state and local levels. As NOVACAN Chairperson Linda Burchfiel noted in her opening remarks to the gathering, "Each of the member organizations has a different emphasis, a different specific focus, but the one thing that unites us is the negative effect climate change is having on Northern Virginia and the things each group is dedicated to protecting. We all believe in the need for advocacy and education."

THE EDUCATION PORTION of their mission was fulfilled by a variety of speakers and by the plentiful availability of written materials provided by several coalition members. First up on the agenda was Del. David Bulova (D-37). Bulova served on the Virginia Commission on Climate Change at the request of then Gov. Tim Kaine. The panel met numerous times throughout 2008 and studied climate change in Virginia from every possible angle, ultimately producing a lengthy report containing more than 100 recommendations aimed at reducing carbon emissions, developing more efficient renewable sources of energy, and planning for the growth and development of the state. Most of those recommendations, according to Bulova, are still awaiting real implementation or have just been shelved.

Del. Bulova went on to highlight the predicted impact of climate change on key natural resources in the state, as well as on business, agriculture and even human health as temperatures rise and the state experiences more severe weather patterns. During his tenure on the commission, he was greatly influenced by 3D modeling images presented by the US Navy. "It was really eye-opening," he said. "You watched whole portions of the coastline just disappear, particularly in areas like Norfolk, Virginia Beach and Hampton Roads. You may not see the tides rise in Vienna, but you sure will feel the effects. I am here to ask you to take action," he added. "The science is solid. And if we’re wrong, what are we left with? Cleaner air, more jobs, more security. Only good things can come from taking our climate crisis seriously."

After Del. Bulova’s talk, it was time for the group to add their voices to the global outreach. Taking up handmade signs, including the "DOT" that was the 350.org theme for the worldwide event, most of those in attendance exited the library, marched up Maple Avenue and down the Washington and Old Dominion Trail to the Vienna Farmer’s Market. They were well received by passers-by in cars, on foot, and even the cyclists on the Trail, as well as patrons of the Market.

EVENTUALLY, the group headed back to the library and continued with the program. Keith Thirion, Lead Virginia Organizer with Chesapeake Climate Action Network presented the case of Dominion Power Company as Virginia’s main polluter and a major obstacle to the development of local renewable energy. Seth Heald, Community Climate Activist and Kate Pollard of the Sierra Club spoke about carbon pollution and the EPA. The program ended with a workshop, paneled by several of the coalition members on how to take personal action by developing relationships with legislators, writing letters and petitions, and making presentations within individual communities.

"There is something for everyone to do, whatever skill level, interest, time constraints, or comfort zone," said NOVACAN Chair Linda Burchfiel. The NOVACAN website is a good place to start, with links to all of their member organizations. For a wealth of related information, and to see photos of climate change activists "connecting the dots" all across the globe, visit the 350.org website.