Golden anniversary brings past and present together to share school culture. 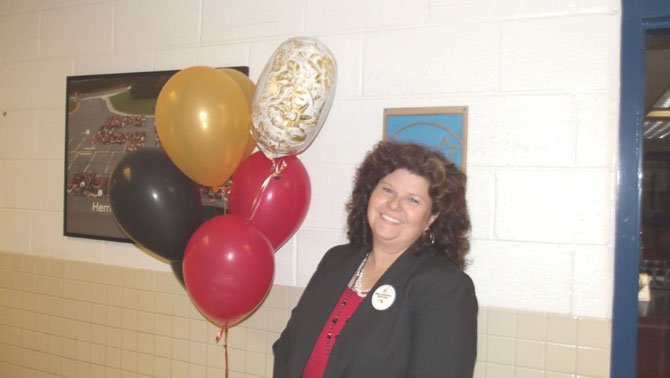 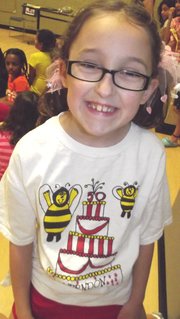 Third grader Lucy Brown is all smiles at the 50 year celebration. 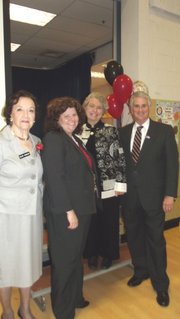 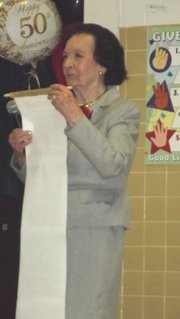 Elma Mankin, who helped open the school, detailed its past.

Over fifty years the thousands of children’s feet walking up and down the stairs at Herndon Elementary School [HES] have worn indents in the stone steps. Those patches are a testament to the strength of repetition and consistence, two attributes that can also be ascribed to education at the school.

On May 1, HES celebrated its 50th anniversary by bringing together current and past students and administrators to share their experiences of the school. The packed gymnasium included Del. Thom Rust (-86), Mayor Steve DeBenedittis, an alumnus of the school, School Board Chairman Janie Strauss and Elma Mankin, one of the original administrators when the school opened.

Mankin held the audience in rapture as she told stories about how different the school was when it opened in 1961. Her experiences highlighted just how much things have changed in a few decades. She remembered, "women started wearing slacks to work, after much discussion" and that at HES "segregation ended with few problems." These days the school holds up its diversity as one of its strengths.

Shock, envy and awe swept over the crowd as Mankin described the cafeteria when the school first started. Explaining that everything was fresh and made from scratch by some of the town’s best cooks, Mankin said HES staff "made the most wonderful homemade biscuits and real ham."

THAT’S CONTRASTED by a movement this year by a parent led Fairfax County group called "Real Food for Kids" that is petitioning to get healthier, less processed foods back into the schools.

It was those values that the anniversary program celebrated by having a speaker from each decade address the time they attended the school and the impact HES had on them. Town Council member Connie Haines Hutchinson, was among the first students to occupy the school. She started as a second grader because prior to the school opening students attended class in a section of the high school. She fondly remembered many of the traditions started during that time such as the science fair and book fair. When Hutchinson attended HES, the school was just the front part of the building with the two levels and didn’t have the wings it does now.

Mayor DeBenedittis attended the school from 1973 to 1980. "A lot of the values you learn that stay with you for the rest of your life, you learn in elementary school," DeBenedittis said. According to DeBenedittis he often tells children at HES, "I went here and if I can grow up and be the mayor, you can too."

From the ’80s Stephanie Gepford was in the first class at HES to enter the French immersion program. She discussed how having a second language has been an advantage over the years and how grateful she is to the program. "Behind every memory [of HES] is a teacher that believed in me," Gepford said.

Gretchen Durant Clardy is a school alumni and the daughter of Paula Durant a third and fourth grade teacher at HES. Like Gepford, she spoke fondly of the immersion program and of the caliber of teachers at HES. A recent mother, Clardy complimented the school saying, "it is my dream that she will one day come here and get to do the program."

Jacob Reeves, a graduate from the 2000s not only spoke at the celebration but he worked for months to complete a project at HES that will endure for years to come. A mural, done as part of his Eagle Scout project, is now part of the main hallway. Reeves said he wanted to give something back to the school and that the mural seemed fitting. He said he hopes the mural "has added a lot to the character of our school."

Sixth grader Michael "Misha" Barth spoke for the current students at HES. He explained that he felt prepared for the challenges of middle school and beyond because of the education and mentoring he received at HES. "It’s sad that I have to leave Herndon Elementary this year but I have learned many great things," Barth said.

CURRENT PRINCIPAL Ann Gwynn said that when she took the job at HES, it was explained to her that traditions were valued highly at the school. She has worked to maintain those traditions as well as build new ones to match the diversity and growth at the school. "I’m very excited to have gotten the privilege of being principal during these exciting times," Gwynn said. Looking around at the standing room only crowd that represented 50 years of students and staff, she said, "It says a lot about the culture of the school when this many people are willing to give up their time to be here."