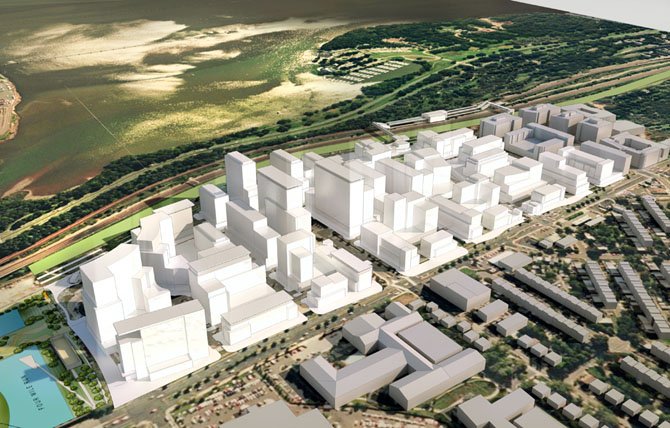 Alexandria — Third in a three-part series about Potomac Yard development.

Perhaps the most crucial part of the City of Alexandria’s Potomac Yard redevelopment plan is a $2.5 billion proposal to develop 69.02 acres on what the city calls “Land Bay F” or North Potomac Yard. This land stretches from the parking lot of the Target store on Route 1 to the Arlington County line.

The area currently is the Potomac Yard Center, a 600,000-square-foot strip mall of box stores, restaurants, and movie theaters.

The new development plan is crucial because it is the most likely location of a Metrorail station and without that station being up and running the 300-acre Potomac Yard development could become a transportation nightmare.

It is also crucial because in order to pay for the Metrorail station without federal, state or Alexandria funds, the City Council raised the ceiling on construction square footage in that area from some 600,000 square feet to 7,525,000. At that “density,” the developer could presumably construct buildings of sufficient size to produce income that would finance the estimated $275 million for the Metro station and the interest on the bond issue.

This dictated that a proportion of those buildings would be as high as 10 and 20 stories, a sharp contrast to the small communities on the west side of Route 1 and could house tens of thousands of workers each day.

The city also provided 3,395,000 square feet of what it called “flex space” that “may be developed as either office or residential,” and must be in proximity to the Metro station according to the Coordinated Development District (CDD) plan.

Gwen Wright, chief of Alexandria’s Development Division, said the city wanted to encourage a good balance between jobs and houses, which in Alexandria has generally been 50 percent residences to 50 per cent jobs. How the developer chooses to allocate the flex space “will be dictated by market conditions. If office space is in major demand, it could build a higher proportion of offices, if residences are in demand it may choose the opposite.”

The land is owned by real estate investment group, listing itself as CPYR, Inc. and represented by McCaffery Interests, Inc., of Chicago.

Edward Woodbury, president of McCaffrey, said the current plan is to build some 2,480,000 square feet of office space, centered largely near the proposed site of the Metro Station. McCaffrey plans to build 3,695 units of residential property, most of them in the northern area of the land near the Arlington County line and a 170-unit hotel, he said.

The developer plans nearly a million square feet of retail space. Woodbury said his group is in delicate discussions with the current lessees in the Potomac Yard shopping center to see which stores, like Target and Best Buy, will want to locate in the new development. This will change the character of the stores from giant boxes to two three-story establishments in office buildings and residential buildings.

McCaffrey estimates that the development will provide 7.5 million square feet of usable area and the “increased value for the owner and the City will exceed $2.25 billion.”

Joe Bondi, who is president of the Lynhaven Citizens Association, was a member of the Potomac Yard Advisory Group, a 19-member panel of citizens and corporate officials who reviewed the plans for the Yard in a series of meetings in 2010. He said he and others worked hard to persuade the city planners that the taller high-rise buildings should be near the Metro and not overshadow Route 1. Lynhaven, St. Elmo and the other small communities on the west side of Route 1 are made up of generally bungalow-style homes built in the 1920s and 1930s and would be stark in contrast to 10- and 12-story buildings.

“This work that we did will inform all the zoning that will come from that CDD,” he said “I do very much expect that the buildings along Route 1 will be four and five stories and not 9, 10 and 11 stories or 19 and 21 stories,” Bondi said. He said he and others didn’t want Route 1 to be a “cavern, overshadowed by giant buildings.”

Bondi said that as far as he can determine citizens of the older communities see favor in the redevelopment though many have not focused on it. Creating a Metro stop will sharply enhance the value of his property and others in the St. Elmo, Lynhaven and Hume Avenue area, he said.

Woodbury said that the current location of the proposed Metro station sits along the east side of the property. An environmental impact study of this location is underway, Woodbury said. This Metro site was one of several proposed locations, but the City of Alexandria favors this location.

Sandra Marks, division chief of Transportation Planning, said the Metro Station “will be an urban station with no parking or kiss and ride.” It will be a stop for both the Blue and Yellow lines.

The second most important element in the city’s plan to deal with the impact of more traffic is called the “Crystal City-Potomac Yard Transitway, (CCPY).”

Susan Gygi, Potomac Yard projects manager, said the Transitway is a five mile long, “two-lane facility open only to transit vehicles.” She said in response to questions that early on there may be restrictions on the number of Washington Metropolitan Area Transit Authority buses and the Arlington county bus service due to the number of operators in the Arlington area so “reliable service” can be provided.

The Transitway is designed to provide a fast way north and south for people without using their cars. In the long run, it will connect to the Arlington County system and provide service from the Pentagon City Metro to the Braddock Road Metro. Arlington and Alexandria are studying whether a trolley or electric railroad might be feasible in later years.

Transitway construction is underway. After the Monroe Avenue Bridge, the Transitway buses will travel on city streets until they reach Braddock Road Station.

Marks said the primary defense against transportation crisis is the phased development.

The construction time element of Potomac Yard could run over as much as 20 years, though other parts of the 300-acre project are well under way.

She said a bicycle and pedestrian walkway has been built along Potomac Avenue and other efforts to deal with traffic are planned from “traffic calming” on streets west of the development to intricate parking regulations. “We want to encourage people not to drive as much as possible.”

But Bondi said that the members of the planning advisory group were not sanguine on the future of traffic. “This was a big fight,” he said, “I come from the school that you can do all the encouraging you want, people are still going to drive.” But the advisory group ended up voting in favor of the plans they were shown, he said.