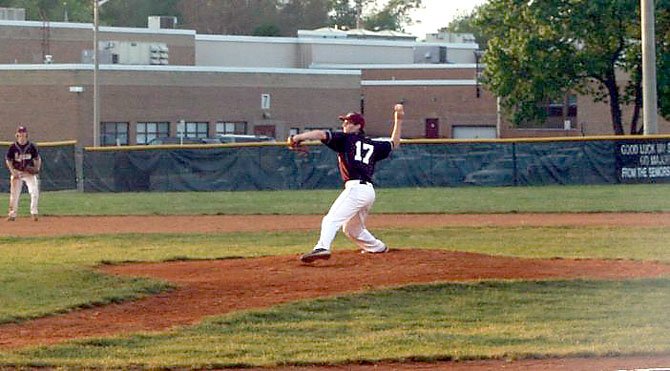 Lehner dominated with his curve ball and cut fastball, facing 26 batters with six strike outs and forcing 11 batters into ground outs. The Majors rallied around Lehner and their fielding was perfect on the night with spectacular plays from senior shortstop Justin Boutin and an iron clad defense in the outfield led by senior Jordan Parker and sophomore Colin Clark.

The Majors’ hitting came on in the top of the eighth with six runs. Senior leadoff man Mike LeMorta had two hits with two RBIs, senior Austin Purkey had two hits and senior Kyle Quigley had one. Boutin had a single and a double with two RBIs, junior Jeremy Larkey had a hit and an RBI and junior Michael Butts had a sacrifice fly for the last RBI of the night.

The Majors ended their regular season May 8 with an 11-10 victory over Wakefield. This was senior night for the Majors, with parents and family members walking senior players onto the field one last time. It was a hitter’s night with the Majors striking in the first inning on a hit from senior LeMorta and a big home run by Larkey. Lehner batted in another RBI for three runs. Wakefield came back with one run in the second, four runs in the third and four in fourth inning, making the score 9-3 Wakefield. The Majors added two in the fifth with a double from Boutin and a couple of singles from Kyle Quigley and Jordan Parker. The Majors added four more runs in the sixth inning with hits from LeMorta, Larkey and a triple by Quigley, leaving the Majors trailing 10-9. The Majors closed the deal in the bottom of the seventh, with a triple from Colin Clark, two base on balls and a walk-off single by Boutin to clinch the victory for the Majors. Quigley came in as relief pitcher during the latter part of the fourth inning, stopping the Wakefield onslaught with five strikeouts and just two earned runs for the night.

The West Potomac JV softball team finished 14-0 in 2012, outscoring opponents 290-24. The Wolverines had five shutouts and allowed only two teams — Lee and Lake Braddock in the final two games — to score more than two runs.

The Mount Vernon boys’ lacrosse team finished runner-up in the National District, losing to Edison in the district tournament final, 7-2, on May 10. The Majors entered the Northern Region tournament with an 8-9 record.