Double the Fun for Oakton Lacrosse 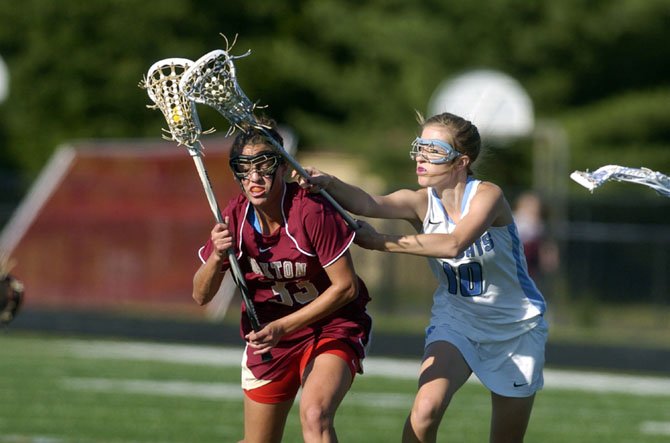 Vienna — A poor defensive game contributed to the Oakton girls' lacrosse team 14-13 Concorde District home loss to rival Centreville High a month ago on April 13. The defeat for the Cougars was one of just two they experienced during the regular season this spring.

So when the two teams met again in last Friday evening's district tournament championship game at Chantilly High School, Oakton, the No. 2-seed, went in determined to tighten things up on the defensive end and to also play a more complete and better game across the board.

And in fact, Oakton did just that, playing an exceptionally strong game in all areas throughout the 50 minute contest and beating a talented Centreville team, 14-7. With the win, the Cougars (11-2) not only avenged their lone district loss of the season but they also captured the district banner and gained an emotional boost for this week's 16-team Northern Region playoffs.

"The last time we played Centreville we didn't do any of the basics," said Oakton head coach Jean Counts. "They have been talking about that game for weeks. I thought Centreville definitely had the best defense in the district when we played them before. We matched that [in the title game]. Our whole defense played together."

From the start of the game, Oakton's defense was clicking as Oakton players helped one another out in coverage and aggressively pursued the ball. When the Cougars stopped the Wildcats by forcing turnovers or missed shots, their transition game to the offensive end was crisp and often led to fast break opportunities. By the end of the first half, Oakton had built an 8-2 lead. Centreville continued to play hard throughout the remainder of the game but never seriously threatened to close the gap in the second half.

The district championship was the second straight for Oakton.

"We won the district last year," said Oakton senior attack Jackie Rupp, who scored a game-high five goals in Friday's title game win. "This year we have 11 seniors and brought the championship to a new level. The last time we played Centreville [in the regular season meeting], defensively we didn't do well. Today I think our fast break was real good. Centreville is very fast and aggressive compared to most teams and will capitalize on your mistakes."

But Oakton simply did not make many mistakes against the top-seeded Wildcats in the finals.

"They played a full game," said coach Counts, of her team. "Today was a better performance across the board and the girls showed what they can do over 50 minutes."

When asked to compare this year's district champions to last year's, Counts explained that this year's Cougars are kind of an extension of the 2012 team.

"We had a great team last year," she said, of a 2011 Cougars' outfit which won the district title and was region runner-up. "We had wonderful leaders and seniors. This year we have essentially the same starting lineup. I told the girls [prior to the finals], `This is yours. You don't work four years for second place.'"

THE OAKTON BOYS' TEAM, following the girls' title game, capped a terrific championship night for Cougar Nation by winning its district championship game over Westfield in a close encounter, 9-8.

Oakton's Jack Harris, a junior attack, scored what proved to be the game-winning goal when, upon receiving a short pass from senior teammate Sean Schweiker, he sent a close range shot into the net off the left corner with about 90 seconds remaining in the final quarter. The tally broke an 8-8 deadlock.

The clutch goal came moments following a Westfield turnover with 1 minute, 40 seconds left. On the game-winning sequence, Oakton senior midfielder Stenson Crews brought the ball down the field. The ball eventually went to Schweiker. He passed the ball left to Harris, who put it home into the net.

It was Harris' lone goal of the game but will long be remembered by Oakton fans.

The contest was close throughout with both teams playing outstanding defense most of the way. At halftime, the Cougars held a 4-3 advantage. In the third quarter, Oakton scored three goals to Westfield's two and took a 7-5 lead into the final quarter.

But Westfield scored three consecutive goals within the first three minutes of the final quarter to take an 8-7 lead with just over nine minutes remaining.

Several minutes later, Oakton, on a man-up advantage, tied the game on a goal by junior midfielder Jeremy Marshall, who flung the ball in off the right wing area from 14 yards out with 5:26 remaining to make it 8-8. Good passing by Oakton set up the score with the assist going to senior middie Evan Lalande.

Over the next several minutes, Oakton continued to apply pressure with Michael Gillooly, a senior midfielder, getting off two excellent attempts, both blocked by Westfield net minder Tucker Winfrey.

Oakton finally went ahead for good on the score by Harris.

Oakton (11-6) had lost to Westfield in the two teams' regular season meeting on April 27 at Oakton.

The Cougars entered the eight-team district tournament as the No. 4-seed. They defeated No. 5 Centreville in a first round game to advance to the semifinals and clinch a spot at this week's 16-team Northern Region playoffs. Then, in a district semifinals game, Oakton upset top seed Chantilly. And the Cougars pulled off another upset in the finals with the win over No. 2-seed Westfield.

"They're peaking at the right time," said Oakton third year head coach Grif Barhight, of his squad. "I just think they believed they could get it done. One of our goals was to win the district championship."