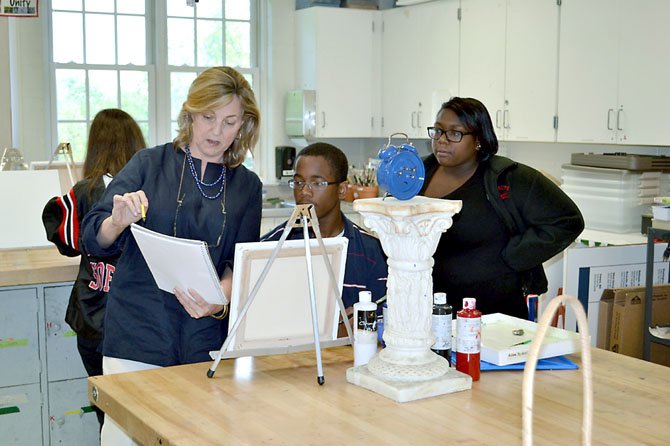 Potomac — Local budding artists were honored for their talent recently when St. Andrew's Episcopal School handed out accolades to more than 50 middle and upper school students at the school's annual Visual Arts Awards assembly in Potomac, Md. The awards celebrate the quality of the art and design produced by student artists each year.

The Judges' Choice Awards were given in several categories, including middle school art, photography, computer graphics, 3-D art and design, ceramics, 2-D art and design and yearbook. The winning artists' work will be displayed in the school for one year.

“We know that the arts not only have value in their own right, but that involvement in the arts amplifies a student's ability to retrieve and integrate knowledge drawn from science, mathematics and the humanities.”

“The public exhibition of artwork in the Kreeger Art Gallery, and the chance to have it assessed in a supportive environment based on standards of excellence in the world of art and design is a valuable and honored opportunity for St. Andrew's students,” said Lauren Cook, head of the school's Visual Arts Department.

St. Andrew's parents who are also active professionals in the fields of visual art, art education and communication judged the students' art. Each piece was evaluated on creativity, personal expression, risk-taking, composition and technical skill with materials.

Cook said the field of visual arts is an integral part of the curriculum at St. Andrew's: “Our students see the arts as a way of thinking and learning and expressing themselves across our curriculum,” she said. “They [learn] important creative problem-solving skills that will help them contribute to the growing 'creative economy' awaiting them. We know that the arts not only have value in their own right, but that involvement in the arts amplifies a student's ability to retrieve and integrate knowledge drawn from science, mathematics and the humanities.”

Cook added that instructors encourage students to develop their individual styles and strengths.

“Our Intermediate School students walk into my classroom ready to create,” said Gary Wyatt, a member of the Visual Arts faculty. “They haven't adopted the 'I don't do art' or 'I'm not a good artist' attitude. My job is to help every student feel successful as an artist, to feel safe experimenting with their art-making, and to help them apply their natural creativity to all sorts of studio challenges, from designing a bridge in their science class, to creating a public service poster with computer graphics, to painting a self-portrait.”

Some students see visual arts as means of self-expression. “For me, art is a way to show what I might not be able to as well through speaking or writing,” said Felipe De La Hoz, an 11th grade student who won awards in the photography and painting and drawing categories. “I may not be able to explain a concept those ways, but I can show it through my photographs or paintings.”

Rachel Greenberg & Sari Postal for work on a sculptural collaboration, 2017

Elyse Sibarium & William Yeo for work on a sculptural collaboration, 2017