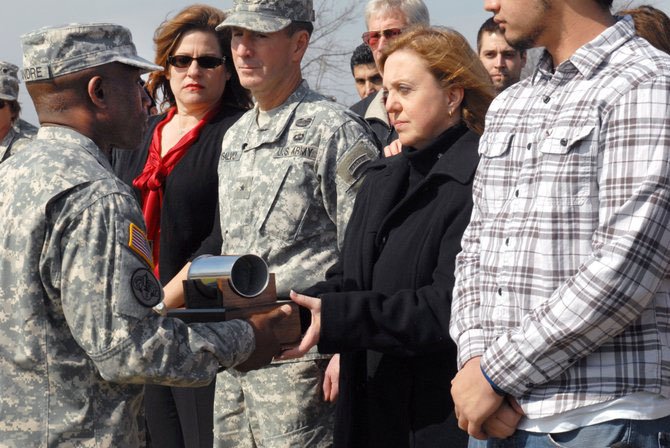 In February, Brig. Gen. Terence J. Hildner, 49, of Fairfax, was the highest ranking military officer to die in the war on terror. Hildner died Feb. 3, 2012 in Kabul province, Afghanistan.

Nearly 50,000 U.S. Military service members have been wounded in the war on terror, although that number is likely to be revised upward. The New York Times reported earlier this month that the military confirmed traumatic brain injury in more than 220,000 of the 2.3 million troops who have served in Iraq and Afghanistan.

The long-term consequences of many of these injuries are unknown, but they will require a national commitment to excellence in health care for both active duty military personnel and veterans.

On Memorial Day, we honor and thank all those who have served in the military, in times of war and peace. It is also a time to reinvigorate efforts to provide the best services and opportunities to our veterans. The Post-9/11 GI Bill dramatically increases the educational benefits extended to members of the military who have served at least three months of active duty since Sept. 11, 2001. Steps to provide better, faster and more responsive health care to veterans, including mental health care are underway, but have a long way to go. This is one place where we must commit the resources to do better.

More than 175 U.S. Military service personnel from Virginia have been killed in Iraq and Afghanistan, including several in the last year.

Aaron Carson Vaughn, 30, was one of 30 American service members and 22 Navy SEALs killed Aug. 6, 2011 when their Chinook helicopter was shot down in Afghanistan. Vaughn's family has ties to McLean and Burke. He is survived by his wife, Kimberly, and their two children.

Other Virginia losses since Memorial Day 2011:

Capt. Jesse A. Ozbat, 28 of Prince George, Va., died earlier this month on May 20, 2012 in Afghanistan when enemy forces attacked his unit with a roadside bomb.

HERE ARE the names of other local men and women who have died in Iraq and Afghanistan and in support of the "war on terror." We repeat these names at least twice a year on Memorial Day and Veterans Day to honor their service and to keep their memories in our consciousness.

If you know of someone who should be included in this list, or if you would like to share how you are honoring the memory of a family member or friend lost, or about the progress of someone injured, please let us know.

Bill Cahir, 40 of Alexandria, died Aug. 13, 2009 of a gunshot wound while conducting combat operations in the Helmand Province of Afghanistan. After 9/11, Cahir decided to leave his career as a journalist and join the Marine Corps. After his application to become a Marine had originally been denied because of his age, he lobbied members of Congress to get a special exemption.

Lance Cpl. Daniel Ryan Bennett, 23 of Clifton died Jan. 11, 2009, in Helmand province, Afghanistan. "He loved his country, and we're so proud of him," said his mother.

Pfc. David Sharrett II, 27 of Oakton, died Jan, 16, 2008 in Iraq. On Oct. 24, 2008, his father, David H. Sharrett, was on hand as the Oakton Post Office on White Granite Drive was renamed to honor his son. But the senior Sharrett has battled to learn the truth about his son's death, that he was killed by his lieutenant in the confusion of a firefight. Just last month, April, 2012, Sharrett Sr. obtained documents confirming some of the details of his son's death and a subsequent cover-up, according to Tom Jackman of the Washington Post.

Sgt. Scott Kirkpatrick, 26, died on Aug. 11, 2007, in Arab Jabour, Iraq. Kirkpatrick, who graduated from Park View High School in Sterling, and also considered Herndon and Reston as his hometowns, was a champion slam poet. His father, Ed Kirkpatrick, calls him the "warrior poet," and he and his wife help injured vets at Walter Reed through the Yellow Ribbon fund (www.yellowribbonfund.org).

Ami Neiberger-Miller of Sterling lost her brother, U.S. Army Spc. Christopher Neiberger, in August 2007 when he was killed by a roadside bomb in Iraq. He was 22. Since her brother's death, Neiberger-Miller has devoted herself to the Tragedy Assistance Program for Survivors (www.taps.org), an amazing organization which provides emotional support and other services for families of the fallen. This Memorial Day weekend, TAPS will bring together survivors in Arlington for the 18th National Military Survivor seminar, along with a "good grief" camp for children who have lost a parent.

U.S. Army Specialist Felipe J. Garcia Villareal, 26 of Burke, was injured in Iraq and flown to Washington Hospital Center, where he died Feb. 12, 2006. He was a graduate of Herndon High School.

U.S. Marine Lance Cpl. Nicholas Kirven, 21, was killed in Afghanistan in 2005 during a firefight in a cave with insurgents. He enlisted while still in high school after 9/11. Maj. William F. Hecker III, a 1987 graduate of McLean High School, was killed in action in An Najaf, Iraq, Jan. 5, 2005. Staff Sgt. Ayman Taha, 31, of Vienna, was killed Dec. 30, 2005, when an enemy munitions cache he was prepping for demolition exploded. Army Capt. Chris Petty of Vienna was killed Jan. 5, 2006.

Operations Officer Helge Boes of Fairfax was killed on Feb. 5, 2003, while participating in counterterrorism efforts in eastern Afghanistan.