Group brings all parties together to plan for Tysons Corner redevelopment.

McLean — The Tysons Partnership, a nonprofit formed to promote the development of Tysons Corner around the Metro and beyond, has selected Michael Caplin as its executive director. Caplin, a 16-year resident of McLean, is an attorney and chair of the Global Advisory Board at the George Mason University Center for Social Entrepreneurship.

"Tysons is changing before our very eyes. When you don’t interact with it on a daily basis, all you think about is the traffic problems, but we like to say we’re trying to build America’s next great city," he said. "Our dream is a Tysons that you won’t have to use your car, you can walk to the Metro, to the bus, to the stores, to the culture, it’s all together." 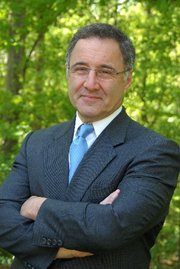 Michael Caplin has been named executive director of the Tysons Partnership.

The group meets once a month to discuss their own goals, and members regularly meet with county organizations and other advocacy groups.

Fairfax County Board of Supervisors Chair Sharon Bulova said she believes the partnership will be an "invaluable tool" for the future of Tysons Corner.

"We’re here to come around the table and discuss all the moving parts of a city, and how to manage them in a way that meets everyone’s goals," Caplin said. "Our challenge is to make Tysons homogenous, but also to allow the individual developers to come up with their own distinct flavor."

Caplin said one of the group’s goals is to find ways to finance the half billion dollars in infrastructure improvements needed, which include fire and police stations, as well as elementary schools.

He also said one of the partnership’s most notable qualities is how the entities are trying to work together for a common goal.

"Normally, as a developer, you develop your parcel and don’t think about anything next to you," he said. "But the innovative thing we’re trying to do is make sure everyone understands the implications on each other’s properties, part of our assignment to look at everything as a whole."

One of the overriding philosophies is an emphasis on planned open space in exchange for increased density.

Tysons Corner currently has about 28 million square feet of office space, and a 13.1 percent Class A vacancy rate.

Cityline Partners has three applications near the Tysons East Station. There are two options for their 9.4-acre site on the east side of Tysons Corner. One option would consist of two buildings made up almost entirely of office development that would be 1,279,000 million square feet.

The second option, which is slightly denser, would be a five-building mixed-use development that would consist of 1,809,480 square feet of commercial, residential and office use.

The second application would be a mix of office, hotel, residential and retail use, totaling 6,658,900 square feet spread out over 16 buildings on a 29-acre plot. The third is a 340,000 square foot office building located at the intersection of Dolley Madison Boulevard and Colshire Drive.

Keith Turner, chairman of the Tysons Partnership and vice president of Cityline Partners said they are committed to "creating a vital, exciting new downtown for Northern Virginia… and it will require unprecedented cooperation among all stakeholders."

Capital One Bank has a proposal in for a total of 14 buildings over 26 acres, which would feature a mix of office, hotel, retail and residential. The Metro Corporation also has an application in for an additional office building and parking structure on their site.

Cityline Partners also has an application in near the Tysons Central 123 station, for an eight-building complex featuring 2,575,685 square feet of office, hotel and residential use.

The Campus Realty Group has an application for their property near the SAIC buildings. The three SAIC buildings will remain, with a fourth converted to a hotel and removal of the existing hotel. Up to 4.9 million square feet over 14 buildings of mixed use development is also part of their application.

The Town of Vienna and the McLean Citizens Association are also active participants with the partnership board. More information on the Tysons Partnership can be found at www.tysonspartnership.org.