Centreville — Hamin “Paul” Chung liked to draw ever since he was a child. But he wasn’t serious about his artwork until he was in high school and started thinking about what he wanted to do after graduation. 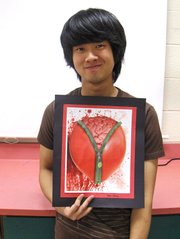 “I can express how I feel and what I like through my art,” said Chung. “I mostly do drawing with pencil or Sharpie — hands-on stuff. But I also do computer graphics.”

His award-winning entry is a red, computer-graphics balloon that unzips to show a brain inside. “There’s a saying that some people are ‘airheads’ — and balloons are filled with air,” he explained. “So I showed one that has a brain.”

Chung titled his work, “Open up My Mind.” His message, he said, is that “People aren’t always how they seem” and that, even those who appear to be dumb can actually be smart. Chung, himself, is well-rounded and doing well in school; he likes sports, plays basketball and has a 3.0 GPA.

Following his graduation from Centreville, he’ll be attending VCU for its art program and plans to major in computer graphics. “I’d eventually like to make logos for companies, or it would be fun to work for Pixar,” said Chung. “I’d also like to design my own T-shirts on the side.”

He won the Gold Key Award in Regional competition in February and then did the same in Nationals in March. “The Regional winners were really good, so I was surprised that my entry went that far at Nationals,” he said. “But I’m really happy.”

He also shared the accolades with his Centreville art teachers. “Mr. [Kris] Killinger helped me with computer graphics a lot,” said Chung.

“And Mrs. [Pam] Young taught me drawing techniques and what to mix to get certain paint colors.” And when he was a freshman, he said, Rory Marcaccio Schaffer “motivated me to be more serious about art — she was really encouraging.”