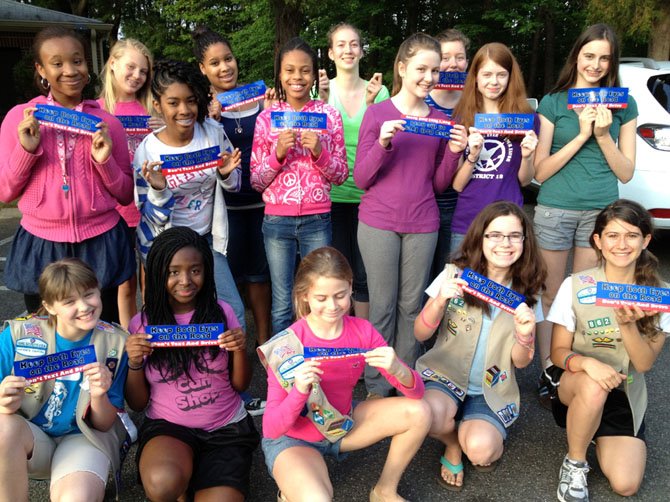 We are Cadette Girls Scouts from Carl Sandburg Middle School and Walt Whitman Middle School and want to alert the community to an issue that is important to us: The dangers of cell phone use while driving. We will be driving in just a few short years and think it is important that the roads are as safe as possible. We urge drivers today to make a commitment to not text or use any handheld device while driving. We also hope that our law makers will support a law that bans drivers from talking, texting, or using handheld devices while driving. We have made this commitment ourselves for when we will be new drivers. We also have produced car bumper magnets to promote “Keep Both Eyes on the Road, Don’t Text and Drive.”

Texting while driving has become a relevant issue in current years because practically every driver owns a cell phone. In fact, 69 percent of drivers admit to talking on the phone while driving. When someone is driving and using a hand-held device, they are 50 percent less aware of what is going on around them, according to a study by the National Safety Council. Accidents that could have been avoided are caused by distracted and unaware drivers. A person using a cell phone while driving is four times more likely to get in an accident that would cause them to go to the hospital than one who is not. All of this information adds up to one thing: Distracted driving is an issue of significance today, and there is no reason that it should continue.

We Cadette Girl Scouts will all be new drivers in two or three years, and because we are the future of the road we think it’s important that current drivers set a good example for us. Don’t text and drive!