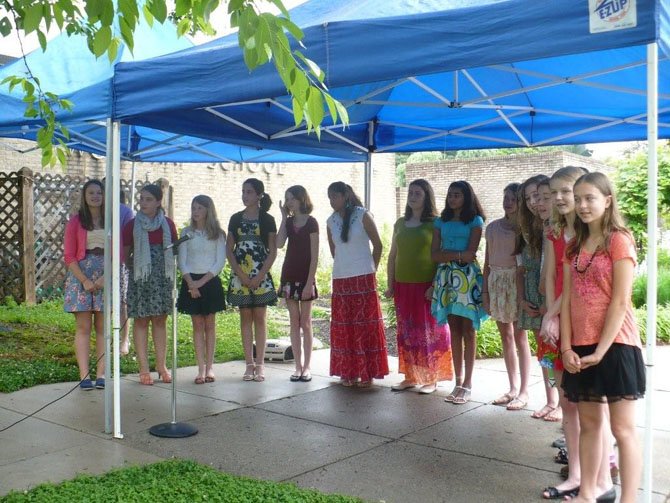 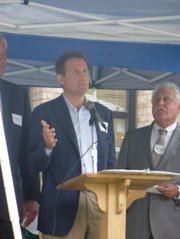 Chris Shumway speaks on the impact his teacher Candace Leyton left on him.

Candace Leyton was not just one to educate; she was one to inspire.

Chris Shumway, her former student who was a UVA undergrad and Harvard Grad student, wanted to honor a teacher who made him "feel empowered."

Shumway kicked off the ceremony after a brief introduction by Anita Blain, the principal of Wolftrap Elementary School.

Shumway was the one who initiated this construction by approaching Blain to undergo the project.

By pooling $800,000, Shumway is able to fund this project, and furnish the lab with state-of-the-art technology.

"Leyton was the epitome of somebody who wanted to make a difference," Shumway explained.

"The story that Chris Shumway told about Candace Leyton never allowing him to give up and always challenging him to do more was inspiring," said Khuluki, who also helped organize the logistics of the ceremony. "It was wonderful to hear our students speak about Wolftrap teachers today the way that Mr. Shumway fondly remembers Mrs. Leyton."

According to Peter Leyton, the husband of Candace Leyton who took the stage next, she was a "tough cookie" and had a "biting sense of humor."

With her passion for math, Leyton strove to improve teaching of mathematics by joining the Virginia State Council on Mathematics, a big step for the Fairfax County Public School community.

"Hopefully, the ceremony will show that teachers can make a difference," said Diane Long, one of the Wolftrap Elementary School’s administrative assistants.

Michele Ferreira, currently an active member in the PTA, remembers when she was one of Leyton’s students. With Leyton’s passion for math, she had inspired Ferreira to pursue engineering.

"One thing I liked was how we got to work with older kids, while still mentoring the younger ones," Ferreira said.

A 30-year employee of Fairfax County Public Schools, Leyton established an innovative approach to education. She fueled inspiration for her students as thinkers, and developed unconventional modes of experiential learning.

Rather than the teaching solely taking place in the classroom, Leyton reached far beyond those bounds. From her established family math nights, to her emphasis on traveling as a means of learning, Leyton took a twist on conventional teaching.

Leyton also took an interest in the music curriculum. After traveling to the Metropolitan Opera in New York City, Leyton integrated opera into students’ classes.

Leyton was a source of inspiration for Ferreira after introducing this musical genre. Ferreira found herself as a member of the Washington Opera for five years.

After Peter Leyton spoke, the school presented Shumway with a gift created by Bethany Mallino, and signed by every student and teacher in the building.

THE CONSTRUCTION will likely be completed in six to nine months, and will be available for all students to use.

The Shumway Foundation is also honoring Leyton, and "other great teachers who bring creativity and a love of learning to the classroom."

"Just as Mrs. Leyton challenged Chris Shumway to learn, we hope this technology lab will inspire both students and faculty to develop skills as critical thinkers and innovators," said the foundation.