Twenty feeding stations set up as part of three-year study. 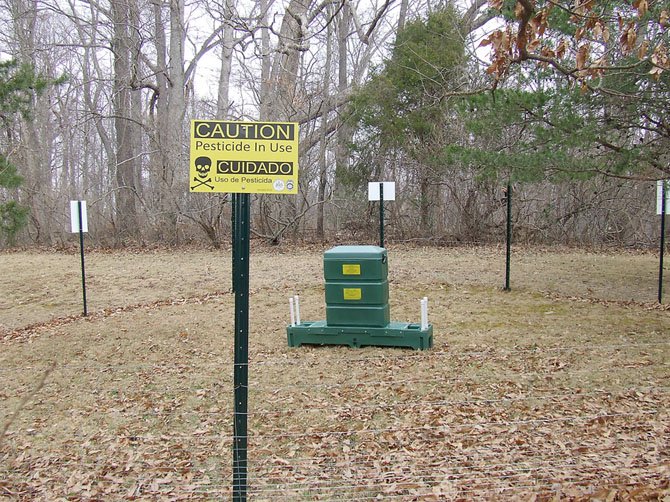 Fences have been constructed around all 20 treatment stations. Signs have been clearly posted at each fence plot site and park patrons are prohibited from handling any equipment or entering the fence plots. Each station is under police surveillance. Photo Contributed

Centreville — After an unseasonably warm winter, Fairfax County health officials are bracing for a proliferation of tick infestations as well as a potential surge in new cases of Lyme disease.

What to Do if Bitten

Lyme disease, which is spread through the bite of an infected blacklegged tick, has been on the rise in Fairfax County in the past decade.

“Northern Virginia is ground zero for Lyme disease,” said U.S. Rep. Frank Wolf (R-10). “Anything that we can do to raise awareness and educate people is critically important.”

This year, Fairfax County has a new tool in the arsenal to fight Lyme disease. In March, the county set up 20 deer feeding stations — five in Hemlock Overlook Regional Park in Clifton, and 15 in Sully Woodlands in Chantilly — that use corn to bait deer and treat the deer with a pesticide to kill ticks before they infect humans.

According to Jeremy Everitts, an environmental technician in the county’s Wildlife Biologist Office, a total of four posts that resemble paint rollers are placed on the corners of the station next to two shallow feeding troughs.

The posts are saturated with a pesticide (10 percent permethrin) used to kill ticks on the deer.

“A deer rubs its head and neck against the rollers as it lowers its head to the trough to feed on the corn at the station,” said Everitts. “This direct contact results in a self-application of the pesticide on the deer. The pesticide is further spread on the deer’s body during regular grooming activity.”

Everitts emphasized that the “4-Poster” pilot study is a tick control study only, not a tick transmitted disease control or prevention study.

The Fairfax County Wildlife Biologist’s Office is conducting the study to see if the pesticide will reduce transmission of ticks to humans and to research the practicality of the feedings stations. The three-year study on controlling tick infestations will run until 2015 and will cost about $380,000, according to county officials.

It’s a program that Supervisor Pat Herrity (R-Springfield) has been lobbying for since 2009 when he hosted a joint town hall symposium on Lyme disease with Supervisor Michael Frey (R-Sully) and Wolf that drew more than 200 people.

“It’s about time we got this program started,” Herrity said. “The Board of Supervisors approved the project in 2009.”

Herrity said he became concerned about the prevalence of Lyme disease after hearing from many of his constituents afflicted with the disease.

“We have an epidemic that we’re largely ignoring,” he said.

IN 2011, the number dropped to 146 reported cases in Fairfax County.

But Herrity said he expects this year to be as bad as or worse than 2009. “It’s been a mild, dry winter, and I can already tell from being out in the woods that (ticks) are proliferating.”

A deer tick takes about 36 hours to transmit Lyme disease, according to the CDC. The longer the disease goes undiagnosed and untreated, the greater the chances are for brain, heart and joint problems.

“For Swine Flu, we went on full red-alert, but more people are afflicted with Lyme disease, and it’s time we take it seriously,” Herrity said.