Dogs are cross-trained for patrol and drugs. 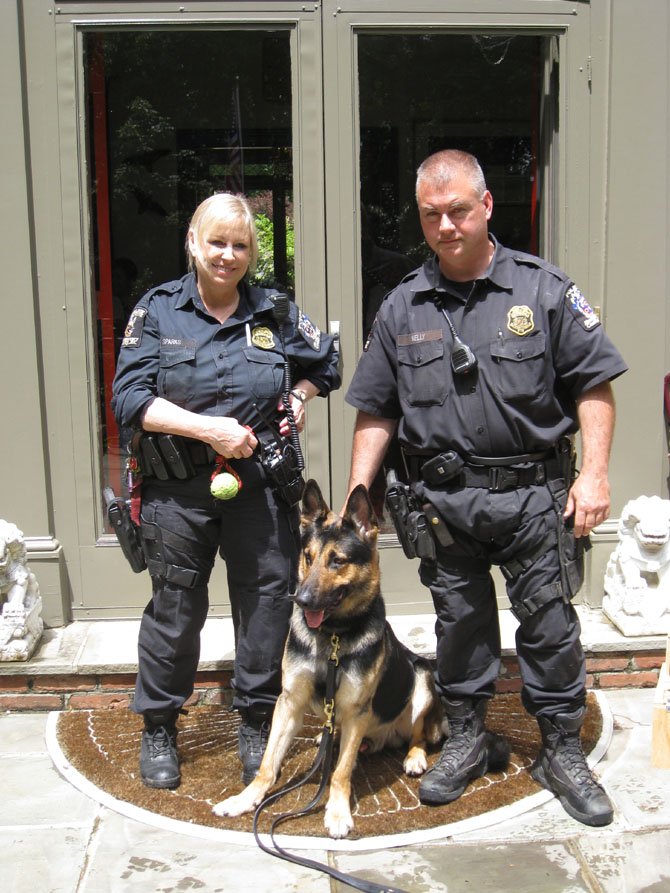 Potomac — Friends of Montgomery County Animals (FMCA), a humane non-profit established in 1974, held its annual spring luncheon meeting on May 15 at the Potomac home of FMCA president Claire Proffitt. Nestled on 5 acres in a woodland setting where a variety of wildlife are wont to roam, Proffitt’s home welcomed more than 60 animal lovers including two police officers with their four-legged colleagues assigned to the Canine Section of the Montgomery County Police Department’s Special Operations Division.

A silent auction earmarked for FMCA’s Fix-It Fund for trap/spay/neuter/release was dedicated to longtime and generous supporter Dottie Shapiro who was unable to attend the luncheon. Shapiro’s assistant, Ana Mudrak, urged the gathering to bid heavily. “If we all do a little bit, we can all accomplish a lot,” said Mudrak. The auction raised nearly $900 to assist the humane efforts of the all-volunteer group.

Proffitt’s foyer became the showcase for Officers Sharon Sparks and Tom Kelly to put their dogs through demonstration drills. The canines exhibited their skills and rapid response to commands.

Sparks’ 4-and-a-half year old German shepherd, Ben, works four 10-hour days per week. He, like many of his cohorts, completed 14 weeks of patrol dog school and an additional six weeks of narcotics training. “Most of the county’s dogs are cross-trained for narcotics which means they are dual purpose dogs, for patrol and drugs,” said Sparks. Since 2009, Ben has tracked down a drug dealer, assisted with apprehending a burglar, helped locate a critical missing person and recovered a knife used in a robbery.

Like Ben, who is from Slovenia, most of the county’s K-9 corps are imported from Europe. “The dogs from Europe are still predominately working dogs and not show dogs so they don’t have hip and other problems,” said Kelly. He said the dogs quickly become bi-lingual. It takes about one week for the animals to transition over to their name change and their new foreign language, English. His dog, Linker, named for his late grandfather, was given a command in German and quickly reacted to grab Sparks’ arm while role-playing how he subdues a suspect.

“Before a dog is released on a suspect, we give the K-9 warning, an opportunity for the suspect to surrender. We say, ‘This is Montgomery County Canine. Come out before we release the dog,’” Sparks said.

Kelly noted that in one hundred apprehensions, there have been only three times when police dogs have bitten suspects.

Sparks presented her 3-year-old black Labrador retriever, Ruffy, who made a diligent round of sniffing cylinders for bomb material to quickly indicate the one with potential explosives by carefully sitting next to the container. The dogs are trained to the passive response of “sit” if there is something they determine suspicious because Kelly said, “It wouldn’t be too good for them to jump.” Sparks added, “Labs are used because they are very easy to train and they have a lot of drive.”

“If an animal is alert to an odor, it can go into the vehicle,” said Sparks. Ben’s keenly trained nose prompted him to jump into a suspect’s vehicle twice on one of Sparks’ calls giving the police probable cause to search the interior where six bags of marijuana were found. “The dogs are responsible for a lot of the drug arrests in the county,” said Sparks.

“Another tool we have to use for people specific searches is bloodhounds,” said Kelly. The dogs are used to locate the “critical missing” such as people with dementia or Alzheimer’s disease, children with autism, perpetrators of crime, and juveniles that could be runaways. The dog is presented with an item associated with the missing person to capture their scent then the command “find” is given. “Bloodhounds are more scent specific. Their role in the world is their nose. With the ‘find’ the dog can give the sense of the direction the team should go. And, if we find your child or mom, how valuable is that find?” Kelly said. The county has established a “silver alert” for missing senior citizens.

After hours, Kelly voluntarily attends classes that include psychology, statistics and probabilities focused on the elderly and the topic of autism and children. “Children with autism tend to go to water, they are attracted by the sound and the sight,” said Kelly. He said the information gleaned from the classes contributes to successful rescue and recovery efforts.

K-9 vehicles are specially equipped with dual kennels, air conditioning, and blowers that remain on while the dogs are inside. Sensors detect any temperature change and notify the officer’s pager while the windows lower and fans come on simultaneously. “The cars are not ours, they’re designed for the dogs,” Kelly said. A safety device for officers is the ability to remotely open the vehicles doors to release the dogs if a situation warrants.

A guest asked if the dogs wear bulletproof vests. Kelly responded that vests cost approximately $1,000 each and are heavy. Only two of the dogs have vests due to funding. “We do not put them in a situation where it’s going to get the dog killed,” Kelly said. However, there was a 1985 incident in Bethesda where a county Rottweiler named Blitz was killed in the line of duty. He saved his sergeant’s life when the suspect aimed his weapon at what he thought was the officer and the bullet hit the dog.

The Montgomery County Police Department’s Canine Section has 20 teams and 29 dogs. Nine of the officers have two dogs. The police department has no kennel so the dogs live at home with the officers as working animals where they are kenneled outdoors with fenced enclosures and insulated doghouses. Kelly said retired dogs have the run of the house as pets. Typically, K-9’s retire when they are 7 to 10 years old depending on their health and the amount of wear they have endured on the job.

Kelly shared the special bond the officers have with their working dogs: “There’s an emotional attachment. It will destroy you when one of your dogs gets sick.”

The Canine Section is working to establish a 501(c)(3) specifically designated for working and retired canines. In the meantime, donations can be made to the Montgomery County Police Foundation with a specific designation to the Canine Section, 16501 Shady Grove Road, P.O. Box 8351, Gaithersburg, MD 20898.