Working to create a dependable flow of funds. 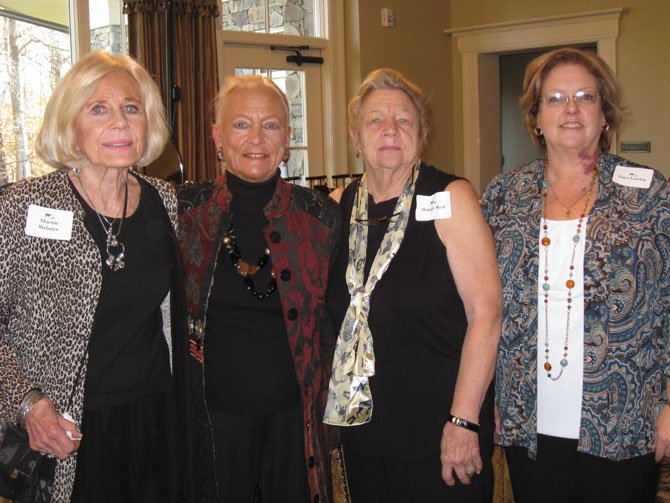 Potomac — Baubles and beads replaced putters and tees to score for the animals when 12 vendor boutiques displayed their wares at TPC at Avenel for the annual fall luncheon and holiday bazaar for Friends of Montgomery County Animals (FMCA) on Tuesday, Nov. 13.

The all volunteer, 501(c)(3) non-profit established in 1974, held the fundraiser to gather members and guests and garner needed financial support to maintain the organization’s humane efforts. Vendors donated 20 percent of their total sales to the cause.

FMCA board president,Claire Proffitt highlighted the group’s Fix-it-Fund created she said to “chip away” at pressing animal overpopulation. So far in 2012, the fund has allowed FMCA to complete 52 TNR/P (Trap-Neuter-Release/Place) operations.

“Approximately 15 households have been helped with extraordinary vet bills and the maintenance needed to keep their pets,” Profitt said. “Although we do receive adoption fees, they only cover approximately two-thirds of the vet care needed to prepare an animal for adoption. 178 cats and kittens plus one dog found their ‘forever’ homes this year.” She added that FMCA’s adoption group continues to shine by fielding calls, organizing adoption events and cat shows as well as managing TNR/P.

Board member Sue Recher — one of the driving forces of the cat and dog adoption volunteers including FMCA vice-president Janet Lamkin, and long time members Leigh Hughes and Kathy Schonely — cites apathy as one of the major challenges for humane groups today.

“The apathy of people toward the animals is a challenge,” Recher said. “They dump them and let them out to fend for themselves. There are caring people out there, the people who adopt, but unfortunately the uncaring outweigh the caring. It needs to be easier to get spaying and neutering done and there needs to be more education regarding spaying and neutering because there are not enough homes for the animals.”

Annual dues of $35 and donations by federal employees through CFCNCA (Combined Federal Campaign National Capital Area) provide a yearly source of funds but more is needed. The organization’s special events are inconsistent fundraisers since monies raised are ever dependent on the number attending, purchases made from vendors, raffles and silent auction revenue. Proffitt said she would like to see the group move away from special events to programs that generate a dependable money flow. An energy program being offered through Viridian is one way she sees FMCA profiting.

Noting that the majority of funds raised go directly to animal welfare, Proffitt said, “We have no shelter or office and only 12 percent of the money raised goes to non-animal support such as tax preparation and the CFCNCA application.”

Corresponding secretary Marion Webster sees funding as critical to humane efforts: “A lot of it has to do with the economy and those people and businesses who would be willing to contribute aren’t able to at this time. It’s an economic fact. Their priorities go in a different direction, to necessities, because they don’t have a lot of loose funds. In a better economy people are more generous.” For more information visit: www.fmca.org.