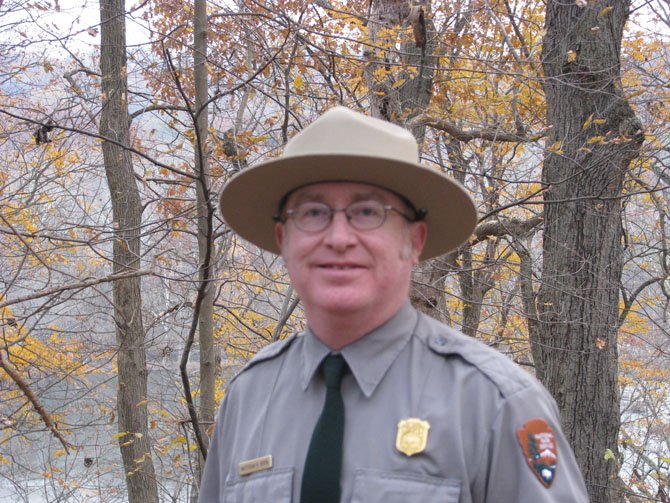 Speaking at a Friends of Dyke Marsh quarterly meeting on Wednesday, Nov. 14, Virta, a cultural resources manager, described the authorized uncontrolled dredging and dumping in Dyke Marsh, without regard to the environmental consequences.

The Dyke Marsh Preserve is a 480-acre freshwater, tidal wetland on the Virginia shoreline of the Potomac river in northern Mount Vernon District, two miles south of Alexandria city. It is a unit of the U.S. National Park Service, U.S. Department of Interior. The marsh is said to have begun forming in the 15th century. The U.S. Congress added the area to the National Park Service in 1959 “so that the fish and wildlife development and their preservation as wetland wildlife habitat shall be paramount.” (Public Law 86-41.)

Glenda Booth: “Matthew Virta’s talk illustrated how humans can live in harmony with nature for literally hundreds of years, and how humans can cause harm, most significantly the 32 years of commercial dredging and dumping that destabilized Dyke Marsh. Now the challenge is to right those wrongs and restore Dyke Marsh.”

Matthew Virta: “While Dyke Marsh has been recognized as a natural resource gem, its cultural history is lesser understood and appreciated. The stories my research has uncovered regarding its human history demonstrate the varied and colorful past the marsh and its surrounding lands have witnessed; a past inclusive of the ordinary populace and not just the more famous figures of American antiquity. It is a history that helps fill out the broad spectrum of former lives that have helped influence and shape the present”

Booth circulated a petition to be submitted to the U.S. Congress, urging their support for the federal funding that will be required to implement the restoration plan that will emerge from the NPS environmental assessment report next year.

Virta presented his history research before an audience of approximately 90 attendees during the meeting held at the Huntley Meadows Park Visitor Center. During the presentation, Virta traced Dyke Marsh, a freshwater tidal wetlands, going back thousands of years based on archeological findings, to more recent early American history dating back 500 years ago and up to the present.

Glenda Booth, president of the Friends of Dyke Marsh, said, “Matthew Virta expertly outlined the rich human history of Dyke Marsh, from native Americans fishing and hunting, the railway from Washington to Mount Vernon, to bootlegging, hiding house boats that were thought to provide prostitution, and then in response to the destructive environmental impact of dredging, for the U.S. Congress to designate the protective stewardship that comes with becoming part of a national park.”

However, the erosion — begun because of years of dredging — continues unabated and restoration plans have to take place, and soon, according to the advocates and scientists who commented during the evening presentation. Through most of the Dyke Marsh history, Virta discussed how farmers, business people, residents, and others seeking recreational activities lived in relative harmony with the wetlands, and were able to benefit from its qualities as a source of food, farming, and recreation. It was not until the owners of an Alexandria city dredging company, Smoot Sand and Gravel, began to dredge the wetlands area that Dyke Marsh began to erode. His presentation made several references to the early years of reporting about Dyke Marsh by the Alexandria Gazette as part of his documentation of its colorful early human history. In one story the Gazette characterized it as “a grand wild place.”

Left without careful restoration efforts, the rate of loss of the wetlands has gone from an area covering 180 acres in 1940 to 53 acres by 2010. The U.S. Geological Survey estimates that the loss is accelerating and that it is currently eroding at the rate of 1.5 to two acres per year on average. Unless something is done to stop the erosion, Dyke Marsh will be gone in 30-40 years.

Stopping the decline will protect a vast array of fish and wildlife that call Dyke Marsh their home. It is a “rare, unique freshwater tidal marsh” in the National Park system, and the only tidal wetlands of its kind according to Dr. L.K. Thomas, retired research biologist with the National Park Service who has studied Dyke Marsh for the past 53 years. He spoke about the marsh’s special place in the world as a vibrant ecosystem with many unique features, and his desire that the federal government fund a restoration program to ensure it’s long-term viability.

Native American habitation and artifacts found in the vicinity.

George Washington labeled it a hell hole swamp because of its impassability.

Westgrove Plantation, which stretched to the Potomac River and Dyke Marsh.

Dyke Marsh as a fishing and hunting paradise.

Boats and/or “arks” that provided cover and havens for brothels, whiskey bootlegging during Prohibition.

A restored and healthy Dyke Marsh would continue to serve as a freshwater wetlands area which is now home to 300 species of plants, 6,000 arthropods (insects, crustaceans, arachnids), 38 species of fish, 16 types of reptiles, 14 types of amphibians, and more than 230 species of birds. One Georgetown University entomologist said, that counting bacteria, there may be 18,000 different organisms in Dyke Marsh. In addition, the marsh also serves as a water filter, and a buffer against flooding, although its diminished wetlands acreage consequently has for the present time been less effective than it has been in the past.