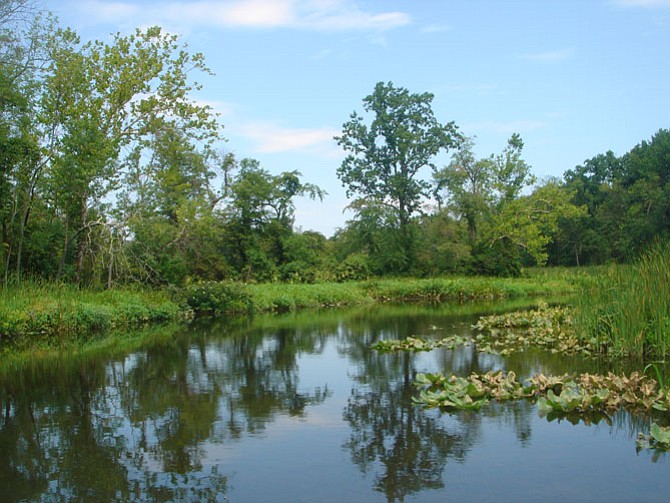 The George Washington Memorial Parkway splices through the Dyke Marsh Wildlife Preserve in northern Mount Vernon along the Potomac River shoreline. It is the "nearest thing to primeval wilderness" in the Washington area, wrote Louis J. Halle in 1947 when he biked from the city at dawn to watch the wetland awaken. It was one of largest tidal, freshwater marshes in the Washington area and one of largest tidal, freshwater, temperate, climax, riverine, narrow-leafed cattail in the National Park Service (NPS) system.

Congress added the 485-acre preserve to the national park system in 1959 “so that fish and wildlife development and their preservation as wetland wildlife habitat shall be paramount.” Dyke Marsh has 300 known species of plants, 6,000 arthropods, 38 fish, 16 reptiles, 14 amphibians and over 230 birds. Parts of it are 2,000 years old.

The wetland once stretched to over 200 acres, but it has shriveled to a 60-acre, fragile remnant. Erosion eats away almost two acres a year, at an accelerating rate which means it will be gone in 20 years, concluded the U.S. Geological Survey (USGS). Dredging from 1940 to 1972 that hauled away almost half of the marsh destabilized the whole system, changing it "from a semi-stable net depositional environment into a strongly erosional one," reported USGS.

Dyke Marsh is getting hit from all sides. On the west side, uncontrolled, mucky sediment flows into the marsh like lava during storms and turns the marsh orange. Dyke Marsh has endured years of excavation, dumping, pollution, invasive species, poaching, illegal bow fishing, hunting, runoff, off-leash dogs and endless trash.

The good news: NPS is designing a restoration plan and has some funding. Fairfax County has a plan to fix the gush of sediment pouring in from the west. Funds are needed.

Newcomers and old timers can enjoy some of Dyke Marsh's wonders and help save this special place. Visit www.fodm.org to learn more.